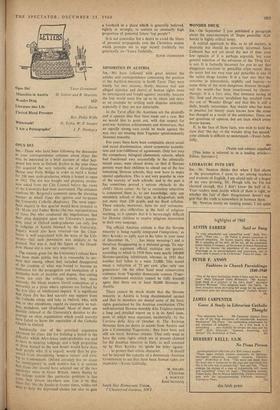 SIR,—We have followed with great interest the articles and correspondence concerning the position of the Austrian minority in South Tyrol. They were

timely for two reasons; firstly, because real and alleged injustice and denial of human rights must be investigated and fought against; secondly. because the free world must live up to its ideals and serve as an example by settling such disputes amicably, especially if they are nut intractable.

In the Tyrol affair the Austrians are the plaintiffs and it appears that they have made out a case. But we would like to point out, with due respect for post-war Austrian achieyements and democracy, that an equally strong case could be made against the way they are treating their Yugoslav (predominantly Slovene) minority.

For years there have been complaints about social and racial discrimination, about systematic assimila- tion and non-fulfilment of agreements. Only last year the compulsory bilingual elementary schools, which had functioned very successfully in the ethnically mixed areas, were closed down; so that if Slovene parents want their children to attend one of the few remaining Slovene schools, they now have to make special application. This is not very popular in view of the scarcity of such schools; and in the past it has sometimes proved a serious obstacle to the child's fliture career. As far as secondary education is concerned there is, to our knowledge, only one secondary school of that type, at Klagenfurt. with not more than 230 pupils and no fixed syllabus. These schools, moreover, have no real autonomy. There are also difficulties in the field of religious teaching, as it appears that it is increasingly difficult for Slovene children to receive religious instruction in their own language.

The official Austrian attitude is that the Slovene minority is being rapidly integrated (Integration.' as Herr Kreisky so aptly says in his letter in your issue of December 16, '. . . has many meanings') and is therefore disappearing as a national group. To sup- port this argument official statistics are quoted. according to which in 1918 there were nearly 100,000 Slovene-speaking inhabitants whereas in 1951 that number had fallen to a mere 23,000. This would mean a reduction of 75 per cent. after only one generation! On the other hand most conservative estimates from Yugoslav democratic sources (Yugo- slav Communist statistics cannot be fully trusted) agree that there are at least 50,000 Slovenes in Austria.

There cannot be much doubt that the Slovene minority in Austria is being discriminated against and that its members are denied some of the basic rights guaranteed by the Austrian constitution. (The well-informed Slovene monthly Klic Triglava carried a long and detailed report on it in its April issue, parts of which were reprinted, incidentally, by the Corriere della Sera of October 4). The Austrian Slovenes have no desire to secede from Austria and join a Communist Yugoslavia: they have been and still are loyal Austrian citizens. They only want to have the same rights which are at present claimed for the Austrian minority in Italy, so well summed up by Herr Kreisky (to quote his letter again):

. . to protect their ethnic character. . . It should not be beyond the capacity of a democratic Austrian Government to see that, these basic human rights are respected.—Yours faithfully,