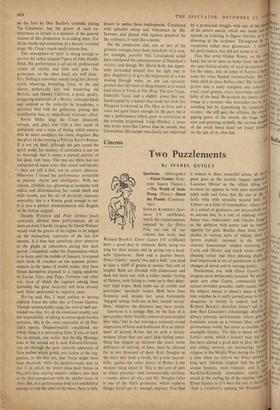 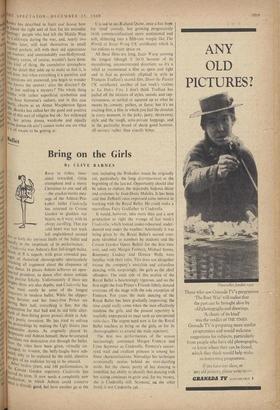 Spartacus. (Metropole.) —Elmer Gantry. (Leic- ester Square Theatre.) —The World of Suzie Wong. (Plaza.)—Shoot the Pianist. (Con t i nen- tale.) STANLEY KUBRICK's Spar- tacus ('A' certificate), which the loquaciousness induced by La Dolce Vita cut out of my column last week, and Richard Brooks's Elmer Gantry ('A' certificate) have a good deal in common. Both, being too long for their talents, end by giving one a head- ache (Spartacus: three and a quarter hours; Elmer Gantry: nearly two and a half: you need at least a whiff of genius to sustain that sort of length). Both are directed with exuberance and dash but leave one with a rather similar feeling of flatness, both failing to come up to their direc- tors' high hopes. Both make use of crowds and panoramic 'spectacle' scenes. Both have Jean Simmons and, besides her, some formidable 'big-gun' acting; both are, in fact, mainly 'actors' films,' whatever the directors may have meant.

Sparkler's is a strange film, on the face of it just another fairly banally conceived and scripted film 'epic,' but in fact leaving a curiously mixed impression of force and feebleness. It is an indict- ment of ancient Rome, but in such a strictly modern idiom that one can't help feeling some- thing has slipped up between the years; some difference of outlook, at least, must be allowed for in two thousand of them. Kirk Douglas as the slave who leads a revolt, for a time success- fully, against the entire power of Rome, is the weakest thing about it. This is the sort of part in which presence---that immeasurable attribute —counts above all else, and Mr. Douglas (who is one of the film's producers, which explains things) hasn't got it: enough, anyway. You find due to 4.4111. Much pleasing colour and often pleasing shape. final impression is one of puzzlement at the fib' Ilnchi changes of mood and its varying quality. Puzzlement, too, with Elmer Gown': bufeIr ,hearse imagine more deliberately aroused. We are ne',A. eith quite sure what Gantry, commercial travel I turned revivalist preacher, really means. w1"tor wehi:-11$ his religion means or doesn't mean a thillgoi him, whether he is really carried away by his 011; !loose eloquence or strictly in control, and s° Richard Brooks's direction doesn't tell 115' .Prel,1"1 does Burt Lancaster's exhaustingly effective. 17 al puts 001. 11.1T.}: always external, performance, which p o Lancaster across as a virtuoso (that conve portmanteau word), but never as credible, on it standable Gantry. The film is based on Sincie Lewis's novel, which I haven't read but g3t, has been altered a good deal in plot; the sill/se and setting, anyway, are fascinating: rev1; religion in the Middle West during the Talent tot a time when (as Inherit the Wind showed long ago) 'old-time religion' had the poWerito arouse hysteria, mob violence, and a vi..;t0.• Ku-Klux-Klannish atmosphere nicely Cr mised in the curling lip of the minister who Elmer Gantry as if it were the end of the W' 'And a CATHOLIC'S running for President. it instead in three masterful actors, all pia}.4 great guns as the ancient, togaed oppositOi Laurence Olivier as the villain filling evc moment he appears in with such unmistakabii, adult truth and force that the rest of the e fairly wilts with unreality around him; Pei Ustinov as a kind of intermediary villain, OW of a school of gladiators, not purposefully nastr to anyone but, in a sort of sidelong riotous funny way, malevolent; and Charles Laughs 4 as the plebeian with power and an insatlaTd appetite for girls. Besides these three rat! $ studies in various sorts of villainy there 1.5 (pretty explicit: unusual, in the Aniell'filf cinema) homosexual subplot involving -Po Curtis and Olivier, and much visual cruelty, °01ss has described in Sight and Sound how 1!e found the right sort of face for his revivalist meetings: people who had left the Middle West for California during the war, and, nearly two Arcades later, still kept themselves in small regional pockets, still with their old appearance 11(1tuanner, and unmistakably non-Hollywood. rdinary extras, of course, wouldn't have done.

his kind of thing, the cumulative atmosphere `1n `l the detail that adds up to make us feel it, is 'ell done, but when everything is 'a question, and questions arc answered, you begin to wonder .110 knows the answer: does the director? Or 6.he just making a mystery? The whole thing 'iristles with rather superficial symbolism and eil ‘e Jean Simmons's radiant, and in this case hearty, charm as an Aimee Macpherson figure

:Ir. Brooks has called her the good and positive side of this sort of religion but oh: her milkmaid art, her prima donna wardrobe and equally °,Enria donna-ish airs!) cannot make one see what ' 's all meant to be getting at.

It is sad to see Richard Quine, once a fair hope for 'mad' comedy, but growing progressively (with commercialisation) more sentimental and soft, slithering into a fifth-rate weepie like The World of Suzie Wang ('A' certificate) which is too tedious to waste space on.

All these films are long, Suzie Wong seeming the longest (though it isn't) because of its meandering, unconcentrated direction; so it's a relief to recommend a film as spare and tight and in fact as positively elliptical in style as Francois Truffaut's second film, Shoot the Pianist ('X' certificate), another of last week's victims to La Doke Vita. I don't think Truffaut has pulled off the mixture of styles, moods, and cap- riciousness, or settled or squared up to what he means by comedy, pathos, or farce; but it's an exciting film, a film in which you feel the director in every moment, in the jerky, jazzy, throwaway style and the tough, semi-private language, and in the particular brand of sharp good humour, off-savoury rather than exactly 'bitter.