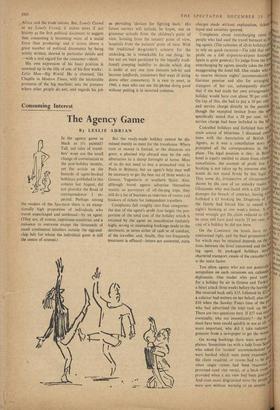 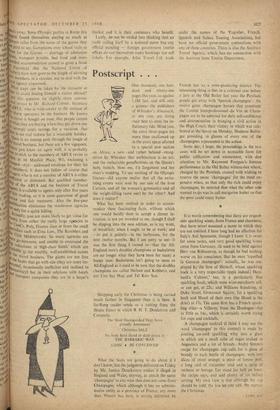 By LESLIE ADRIAN Is the agency game as black as it's painted? Tall, sad tales of travel- lers' woes are the small change of conversation in the post-holiday months, yet the article on the hazards of agent-booked holidays, published in this column last August, did not provoke the flood of correspondence I ex- pected. Perhaps among the readers of the Spectator there is an excep- tionally high proportion of individuals who travel unpackaged and unblessed—by an agent. (They are, of course, capricious eccentrics and a nuisance to everyone except the thousands of small continental hdteliers outside the egg-and- chip belt for whom the individual guest is still the centre of interest.) But the ready-made holiday cannot be dis- missed merely as meat for the travelmass. Where time or money is limited, or the distances are great, a planned trip abroad may be the only alternative to a damp fortnight at home. Most of us do not need to buy a prepacked visit to Paris or Brittany, but an agent's help may well be necessary to get the best out of three weeks in Greece. Yugoslavia or southern Spain. Also, although travel agents advertise themselves mainly as purveyors of off-the-peg trips, they still do a lot of business as reservers of rooms and bookers of tickets for independent travellers.

Complaints fall roughly into four categories: the size of the agent's profit (too large), the pro- portion of the total cost of the holiday which is retained by the agent on cancellation (unfairly high), wrong or misleading bookings made to the detriment, in terms either of cash or of comfort, of the traveller, and, finally, that too frequently treatment is offhand—letters not answered, extra -charges made without explanation, tickets III, layed and anxieties ignored. %els Complaints about overcharging came ft' people who had used the travel bureaux as ing agents. (The salesmen of all-in holidays P to rely on quick turnover—I'm told that Dill/ profit on a £40 airport-to-airport fortnight Spain is quite general.) To judge from the leg overcharging by agents usually takes the for exaggerating the hotel bill. One reader who to reserve thirteen nights' accommodation st German pension and also for arranging transport of her car, subsequently disco/ that if she had made her own arrangements holiday would have cost about 50 per cent.' On top of this, she had to pay a 10 per cent. and service charge directly to the pension, though the receipted invoice from the ag specifically stated that a 10 per cent. tax i Too often agents who are not positively 1 scrupulous on such occasions are callouslY0 diplomatic. One reader who paid sonic 101 for a holiday by air in Greece and Turkey g.

a heart attack three weeks before the leaving' N! She received back only £35, followed by £12vf a solicitor had written on her behalf, plus an',sd £10 when the Sunday Times (one of the l'°;. who had advertised the trip) took up the cod There are two questions here. If £57 was retuio eventually, why not immediately?--the berli must have been resold quickly or not at al110 more important, why did it take rudeness , pressure from a newspaper to get the move!'' On wrong bookings there were several 110 plaints. Sometimes (as with a lady from WI" who asked for 'modest' accommodation) htbii were booked which were more expensive the client required, or rooms had to be sha 0 , when single rooms had been requested 0 promised (and vice versa), or a back roomc4 provided when a sea view had been guarani And even more disgruntled were the peoPle were sent without warning to an annexe, service charge had been included in the bil"0 see \sh Cancelled holidays and forfeited fees are ter se. main source of bitterness. I discussed can 03 tions with the Association of British Trio Agents, as it was a cancellation story vlio prompted all the correspondence in the !, place. The legal position is this: in Britaltto hotel is legally entitled to claim from clients) cancellation, the amount of profit lost if booking is not taken up by someone else. hotels do not stand firmly by this legal 05 That some do, irrespective of circumstances., shown by the case of an unlucky reader ft; Gloucester who was faced with a £28 clan° damages for breach of contract, having all forfeited a £5 booking fee. Diagnosis of .11 the family had forced him to cancel a , night's booking at one week's notice. Aso tonal wrangle got the..claim reduced to £10., he must still have paid nearly 25 per cent. 01 cost of a holiday he did not have. On the Continent the hotels have no contractual right, and the final proportion of ci fee which may be retained depends on the fj tions between the hotel concerned and the ing agent. In packaged holidays inOlpo chartered transport, resale of the cancellers , is the main factor. eels away. Some Olympic parties in Rome this gust found themselves staying as much as ghteert miles from the scene of the games they d Paid ;ec. Complaints over school visits to 11'43rile for the Games — shortage of admission , Ickets, transport trouble, bad food and over- . wded accommodation caused to great a flood discontent that the National Union of leachers have now gone to the length of advising their members, in a circular, not to deal with the r41'el agency concerned.

What steps can be taken by the innocent at e to avoid finding himself a victim abroad?

Put this question lin slightly more conven- .11f3nal terms) to N1r. Richard Colmer. Secretary , ARTA, who is wide-awake to the menace of :17 sharp operators in the business. He knows travel is bought on trust, that people cannot lewh At they are buying w hen they put down one are 9r se_

,eral) years savings for a vacation. that

:an ck_ vl is no real redress for a miserable holiday. Ta., There is no treetop path through the jungle oftaiVvirgi travel vel business, but there are a few signposts. the , 'Ness you know an agent well, it is probably tritar ,se to stick to the members of ABTA (write to ients.„ tilem ii tra ttanl...at 10 Mayfair Place, WI, enclosing a Ped---41d.—addressed envelope for their list se. 141. rne

,1 gent \■ho is not a member of ABTA is either loco ..etljeient or dishonest. But qualified member- cr 11114) Agent°st the ABTA and the institute of Travel is available to agents only after five years alrm fair trading, so it is some guarantee of good n s'e and fair treatment. Also the five-year (It °• neat-ion eliminates the mushroom agencies for a quick killing. Secondly you are more likely to get value for the • )" from either the really large agencies in t Poly, Frames class or the .ecia lists such as Erna Low, Thefrom Ramblerssmall and lhe C tub Mdditerrande. So many agencies are bi rcgo-betweens, and unable to command the haila!dutions at high-lass hotels' which are c 1p bie W the wealthy,c well-established names the travel business. The giants are not free Ithe faults that go with size (they are more im- rs °dal. occasionally inefficient and inclined to and and tucracY) but in their relations with hotels ransPort companies they are in a buyer's

market and it is their customers who benefit.

Lastly, do not be misled into thinking that an outfit calling itself by a national name has any official standing — foreign government tourist. offices (10 not themselves make bookings nor sell tickets. For example, Atlas Travel Ltd. trade