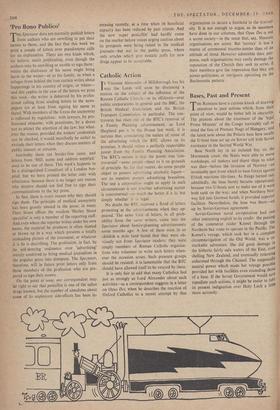 It ViscountAlexander of Hillsborough has his way the Lords will soon be discussing a motion on the subject of the influence of the Roman Catholic Church—or its offshoots—over public corporations in general and the BBC, the British Medical Association and the British Transport Commission in particular. The con- troversy has risen out of the BTC's removal of a Family Planning advertisement; as Lord Shepherd put it in the House last week, it is curious that, considering the nature of some of the advertising which the BTC allows on its premises, it should refuse a perfectly respectable poster from the Family Planning Association. The BTC's excuse is that the poster was 'con- troversial'—some people object to it on grounds of principle. So. for that matter, do some people object to posters advertising alcoholic liquor— not to mention posters advertising brassieres. The test a corporation ought to apply in such circumstances is not whether advertising matter is controversial—so much the better if it is; but simply whether it is legal.

No doubt the BTC received a flood of letters protesting at the advertisements when they ap- peared. The same kind of letters, in all prob- ability from the same writers, came into the Spectator about family-planning advertisements some months ago. A few of them were in so childish a style (and hand) that they were ob- viously not from Spectator readers; they were simply members of Roman Catholic organisa- tions who volunteer to write such letters when- ever the occasion arises. Such pressure groups should be resisted; it is lamentable that the BTC should have allowed itself to be swayed by them.

It is only fair to add that many Catholics feel just as strongly as Lord Alexander about such activities—as a correspondent suggests in a letter on Opus Dei, when he describes the reaction of Oxford Catholics to a recent attempt by that organisation to secure a foothold in the Univer- sity. It is not enough to argue, as its members have done in our columns, that Opus Dei is not a secret society—in the sense that, say, Masonic organisations are secret. But 'secrecy' is less a matter of ceremonial mumbo-jumbo than of an attitude of mind. However admirable their pur- poses, such organisations may easily damage the reputation of the Church they seek to serve. if their members give the impression that they are power-politicians or intriguers operating on the Buchmanite pattern.