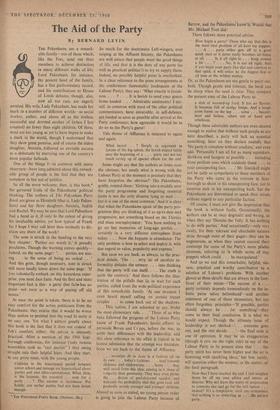 The Aid of the Party

One of the things 1—in common with many observers—have long admired about this remark- able group of people is the fact that they are somehow in but not of politics.

So all the more welcome, then, is this book,* the garnered fruits of the Pakenhams' political thinking. The authors of The Pakenham Party Book arc given as Elizabeth (that is, Lady Paken- ham) and her three daughters Antonia, Judith and Rachel. We may be sure that Lord Pakenham had a hand in it, if only to the extent of giving his invaluable advice, yet how typical of Frank (as I hope I may call him) thus modestly to dis- claim any share of the work!

The note is struck in the heading to the very first chapter: 'Parties are worth it,' it proudly proclaims. Though the warning comes quickly— indeed, on the same page: '. . . parties are test- ing . . . in the sense of being an ordeal . . And this grim, though necessary, note is struck still more loudly lower down the same page: 'If You voluntarily embark on this hazardous enter- prise, you must face facts. And the first and most important fact is this: a party that fails. has no point—not even as a way of paying off old scores.'

At once the point is taken; there is to be no easy comfort for the active politicians from the Pakenhams; they realise that it would be worse than useless to-pretend that the road to unity is an easy one. Yet what I admire greatly about this book is the fact that it does not consist of Job's comfort, either; the advice is intensely Practical. After a mention ,'of the 1960 Scar- borough conference, for instance ('only riotous assemblies rank as "real parties" ') they swing straight into their helpful hints. And they start, as any party must, with the young people.

Children in the transitional period between junior school and teenage are hypercritical about parties and also ultra-conventional. What, then, is the keynote, the essential . . . note for a party . . . ? The answer is lavishness. Put baldly, our earlier parties had not been lavish enough.

So much for the doctrinaire Left-wingers, ever sniping at the Affluent Society; the Pakenhams are well aware that people want the good things of life, and that it is the duty of any party (as well as practical politics!) to try to supply them. Indeed, no possibly helpful point is overlooked. In a clear reference to the press arrangements at the conferences (lamentably inadequate at the Labour Party), they say: 'What exactly is lavish- ness . . ? . . . It is lavish to send your guests home loaded. . . .' Admirable sentiments! I my- self, in common with most of the other political commentators, have invariably, in self-defence, got loaded as soon as possible after arrival at the Party conference; how agreeable it would be to do so as the Party's guest!

This theme of Affluence is returned to again and again.

What moral . . . ? Simply an argument in favour of the big splash, the lavish impact fairly near the beginning of a . . . party and not too much saving up of special effects for the end.

Some might say that the authors at times state the obvious; but surely what is wrong with the Labour Party at the moment is precisely that they have forgotten the obvious? The Pakenhams, gently, remind them: 'Getting into a muddle over the party programme and forgetting essential items is not the only disaster lying in wait . . . but it is one of the most common.' And it is clear that when the Pakenhams speak of the party pro- gramme they are thinking of it as up-to-date and progressive, not something based on the Thirties and mass unemployment: 'You have nothing to go on but memories of long-ago parties . . . certainly in a very different atmosphere from today. . . . Now the keynote is abundance. The only problem is how to select and deploy it, with due regard to value, popularity and expense.'

But soon we are back, as always, to the prac- tical details. 'The . . . very air of carefree in- formality deludes the unwary . . . into thinking that the party will run itself. . . . The truth is quite the contrary.' And there follows the illus- tration of the pitfalls that lie in wait for such parties, culled from the wide•political experience of this remarkable family. 'At one moment I even heard myself calling on certain truant couples . . . to come back out of the shadows. . . This action, I am ashamed to say, broke the most elementary rule.. . .' Those of us who have followed the progress of the Labour Party know of Frank Pakenham's heroic .efforts to persuade Bevan and Cr:pps, before the war, to settle their differences with the leadership, and this clear reference to the affair is typical in its honest admission that the attempt was mistaken. Soon we are back to the theme of Affluence.

. . . nostalgic de la bone is a fashion all on its own . . . today's fashions . . . tend towards slickness and elaboration. . . . Some . . . may well recoil from this idea, sensing in it more of vulgarity than generosity. They may even prefer the . . . dream of prefabricated squalor, and welcome the probability that this grim taste will gradually invade younger and younger children.

Absurd as soon as stated; no young person today

is going to join the Labour Party because of Jarrow, and the Ptikentirns* know 'it. Would Mr. Michael Foot did!

all time or the wildest mutiny.

Or, as the Pakenhams are too gentle to point both. Though gentle and tolerant, the book be sharp when the need is clear. They comf the present state of the Labour Party to a dish of warmed-up food. It has no flay It becomes full of stodgy lumps. And a to scum forms on the top . . . some . . . heel inert and listless, others out of hand rebellious.

Though these admirable authors are even shri enough to realise that without such people as here described, a party will lack an essen something; later on they declare roundly 1 'No party is complete without crackers,' and e add, 'Personally I am all for as many squeak shriekers and bangers as possible . . . incluO those perilous ones which suddenly shoot . . your unsuspecting face. . . .' Mr. Gaitskell mi not be quite so sympathetic to those members the Party who came to the rostrum at S borough to shoot in his unsuspecting face, no mention stab in his unsuspecting back, but Pakenhams are determined to speak their mi without regard to any particular faction.

Of course, I must not give the impression t the book is without faults. Occasionally, authors can be at once dogmatic and wrong, when they say 'Dismiss the Telly. It has noth to do with parties.' And occasionally—only v rarely, for their tolerant and charitable natl. shine through most of their pages—they can ungenerous, as when they cannot conceal d contempt for some of the Party's more plia elements, referring to 'a whole series of t puppets which could . . . be manipulated.'

And so we end this remarkable, helpful, E cere, practical and worthy contribution to solution of Labour's problems. With allot glance at those details that are always in the fo front of their minds—The success of a . party certainly depends tremendously on the finite pains taken beforehand'—and allot statement of one of those elementary, but often forgotten, principles-1f possible, parr should always be . . . for something'—fl come to their final conclusion. It is what would expect. Though the ultimate issue leadership is not shirked—'... someone gi out, and the rest decide . . .'—the final note one of optimism. It may be an exaggerat (though it errs on the right side) to say of Labour Party in its present state that . . party spirit has never been higher and the ail humming with sparkling ideas,' but few, sun will question either the manner, or the matter, the final paragraph.

Now that I have reached the end. I feel weigl down by all my own advice and stories disaster. Why not leave the worry of preparat to someone else and go for the soft option . instead? It's a temptation; until one rememh that nothing is so rewarding as . . . the pert party.

hat the as ing cry res be ble

too ies ey we of

Des is on the the is