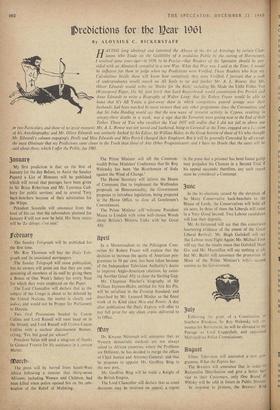 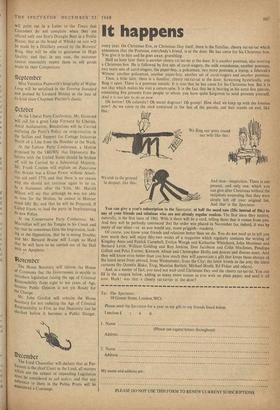 My first prediction is that on the first of January (or the day Before, to Assist the Sunday Papers) a List of Honours will be published which will reveal that peerages have been given to Sir Brian Robertson and Mr. Laurence Cad- bury for public services; and to several Tory back-benchers because of their admiration for the Whips.

President Soustelle will announce from the boot of his car that the referendum planned for January 8 will not now be held. His State motto will be `Le deluge, c'est nwi.'

The Sunday Telegraph will be published for the first time.

Mr. Roy Thomson will buy the Daily Tele- graph and its associated newspapers.

The Sunday Telegraph will cease publication, but its owners will point out that they are com- pensating all members of its staff by giving them a Bonus of One Week's Salary for every Year for which they were employed on the Paper.

The Lord Chancellor will declare that as the subject of the Congo is about to be debated by the United Nations, the matter is clearly sub judice, and would not be Proper for Parliament to Discuss.

President Salan will send a telegram of thanks to General Franco for his assistance in a certain Matter.

The press will be barred from South-West Africa following a rumour that thirty-seven Africans, including Women and Children, had been killed when police opened fire on the cele- bration of the Relief of Mafeking. The Prime Minister will tell the Common- wealth Prime Ministers' Conference that Sir Roy Welensky has been 'the Bicarbonate of Soda against the Wind of Change.'

The Home Secretary will inform the House of Commons that to implement the Wolfenden proposals on Homosexuality, the Government proposes to introduce legislation, being prepared in the Home Office, to close all Gentlemen's Conveniences.

The Prime Minister will welcome President Massu to London with some well-chosen Words about Britain's Historic Links with her Great Ally.

In a Memorandum to the Pilkington Com- mittee Sir Robert Fraser will explain that the decision to increase the quota of American pro- grammes to 50 per cent. has been taken because of the Independent Television Authority's desire to improve Anglo-American relations, by assist- ing Another Great Ally to close the Sterling Gap.

Mr. Chapman Pincher's biography of Sir William Joynson-Hicks, entitled Jix Nix Six Pix, will be serialised in the Evening Standard, and described by Mr. Leonard Mosley as the finest work of its Kind since Men and Power. A day after publication the Daily Express will offer to pay full price for any clean copies delivered to its Office.

Dr. Kwame Nkrumah will announce that, as Western democratic methods are not always suited to African countries, where the Problems are Different, he has decided to merge the offices of Chief Justice and Attorney-General; and that he proposes to appoint Mr. Geoffrey Bing to the new post.

Mr. Geoffrey Bing will be made a Knight of the British Empire.

The Lord Chancellor will declare that as court decisions may be reversed on appeal, a report in the press that a prisoner has been found guil:v may prejudice his Chances in a Second Trial ,t his appeal succeeds; therefore, any such rev.: must be considered a Contempt.

31111C In the by-elections caused by the elevation of So Many Conservative back-benchers to the House of Lords, the Conservatives will hold all six seats. In three of them the Liberals will come in a Very Good Second. Two Labour candidates will lose their deposits.

Mr. Jo Grimond will say that this constitutes heartening evidence of the extent of the Great Liberal Revival: Mr. Hugh Gaitskell will say that Labour must Fight Again; Mr. Michael Foot will say that the results mean that Gaitskell Must Go; and Mr. Macmillan will say nothing at all but Mr. Butler will announce the promotion 01 More of the Priine Minister's wife's second cousins to the Government.

Following the grant of a Constitution to Southern Rhodesia, Sir Roy Welensky will flounce his Retirement; he will be elevated to the Peerage as Lord Copperbelt, and appointo. Metropolitan Police Commissioner.

Ulster Television will announce a new pro gramme, What the Papists Say. • The Brewers will announce that in order Rationalise Distribution and give a better tier: vice to their Customers, only One Brand ot Whisky will be sold in future in Public Houses.

In response to protests, the Brewers' Ring will point out in a Letter to the Times that Custorriers do not complain when they are offered only one firm's Draught Beer in a Public House; that as the brand of Whisky on sale will be made by a Distillery owned by the Brewers' Ring, they will be able to guarantee its High Quality; and that, in any case, the customer cannot reasonably expect them to, sell goods made by their Competitors.

Miss Veronica Papworth's biography of Walter Long will be serialised in the Evening Standard and praised by Leonard Mosley as the best of its kind since Chapman Pincher's classic.

At the Liberal Party Conference, Mr. Grimond will call for a great Leap Forward by Liberals. Amid Acclamation, Resolutions will be Carried outlining the Party's Policy on crop-rotation in the Scillies and Support for Cottage Industries North of a Line from the Humber to the Wash.

At the Labour Party Conference, a Motion proposed by the T&GWU that Diplomatic Re- lations with the United States should be broken off will be Carried by a Substantial Majority. Mr. Frank Cousins will explain on Panorama that Britain was a Great Power without Ameri- can aid until 1776 and that there is no reason Why she should not continue again to be so. In a Statement after the Vote. Mr. Harold Wilson will say that although he was not able to vote for the Motion, he cannot in Honour stand Idly By; and that he will be Prepared, if Called Upon, to lead the party in Implementing its new Policy.

At the Conservative Party Conference, Mr. Macmillan will put his Tongue in his Cheek and !ay that he sometimes Gets the Impression, look- ing at the Opposition, that he is seeing Double; and Mr. Bernard Braine will Laugh so Hard that he will have to be carried- out of the Hall with an Apoplexy.

The Home Secretary will inform the House of Commons that the Government is unable to introduce legislation raising the age of Criminal Responsibility from eight to ten years of Age, because Public Opinion is not yet Ready for the Change.

Mr. John Gordon will criticise the Home Secretary for not reducing the Age of Criminal Responsibility to Five, so that Depravity can be checked before it becomes a Public Danger.

The Lord Chancellor will declare that as Par- liament is the chief Court in the Land, all matters Which are the subject of impending Legislation Must be considered as sub judice; and that any reference to them in the Public Prints will be considered a Contempt.