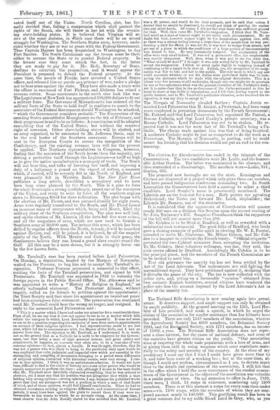 Page 3, 23 February 1861 — The election for Aberdeenshire has ended in the triumph of
Close

The election for Aberdeenshire has ended in the triumph of

the Conservatives. The two candidates were Mr. Leslie, and the honour- able Arthur Gordon. The latter was nominated in his absence, and thus contended at a disadvantage. The numbers were—Leslie, 851; Gordon, 665.

The proposed new boroughs are on the alert, Kensington and Chelsea are disgusted at a project which only gives them one member, and have passed indignation resolutions demanding. two. In South Lancashire the Conservatives have held a meeting to select a third candidate. Lord Stanley's name is prominently mentioned. The Liberals are on the look-out for a man. Both parties are agitating Birkenhead; the Tories put forward Mr. Laird, shipbuilder; the Liberals Mr. Brassey, son of the contractor. It is calculated that the opponents of Church-rates will muster nearly 300 men on a division this Session upon the second reading of Sir John Trelawney's Bill. Sanguine Churchmen think the supporters of the bill will not muster more than HO.

Mr. Cobden is to be feted at Bradford, as we'll as rewarded with a substantial cash testimonial. The good folks of Bradford, who lately gave a shining example of public spirit in electing Mr. W. E. Forster, intended to invite Mr. Gladstone, Mr. Milner Gibson, and Mr. Cob- den to a banquet to celebrate the French treaty. "Official etiquette" prevented the two Cabinet ministers from accepting the invitation. To Mr. Cobden, their volunteer colleague, was due, they said, the civic crown offered by Bradford. Accordingly Mr. Cobden is to be the principal guest, and the members of the French Commission are to be invited to meet him.

That old grievance the annuity fax has not been settled by the Act of the Lord Advocate. The malcontents are still fighting for unconditional repeal. They have petitioned against it, declaring that it disturbs the peace of the city. The tax is now collected with the police rate, anti, acting on a 'favourable "opinion" obtained from two eminent English barristers, several citizens have tendered the police rate less the amount imposed by the Lord Advocate's Act in place of the annuity tax.