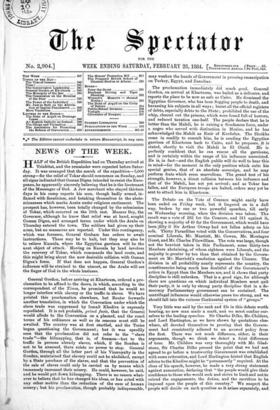 Page 1, 23 February 1884 — The Debate on the Vote of Censure might easily have
Close

The Debate on the Vote of Censure might easily have

been ended on Friday week, but it lingered on in a dull way, broken by one or two powerful speeches, till early on Wednesday morning, when the division was taken. The result was a vote of 262 for the Censure, and 311 against it, showing a majority of 49 for the Government, which would. have been ififty if Sir Arthur 0 tway bad not fallen asleep on his sofa. Thirty Parnellites voted with the Conservatives, and four nominal Liberals, Mr. Marriott, Mr. Cowen, Mr. Montague Guest, and Mr. Charles Fitzwilliam. The vote was large, though not the heaviest taken in this Parliament, some thirty-two Members abstaining, of whom eighteen were Liberals, and the majority is greater by ten than that obtained by the Govern- ment on Mr. Marriott's resolution against the Closure. The division in all probability nearly represents the country, the constituencies being much less doubtful of the Government's action in Egypt than the Members are, and it shows that party discipline is still unbroken. That is a good sign, for although there are questions on which individual Members must quit their party, it is only by strong party discipline that in a de- mocracy Parliamentary government can be sustained. The centrifugal influences would otherwise prove too strong, and we should fall into the ruinous Continental system of "groups."