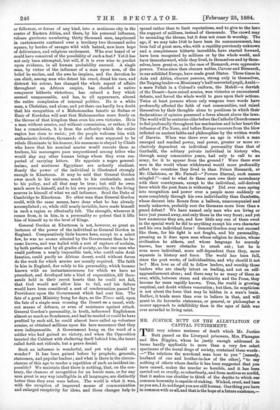 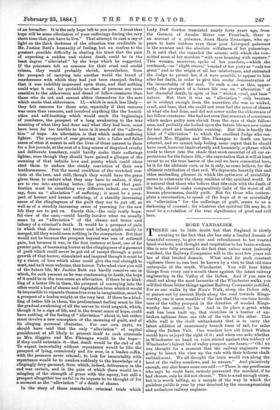 MR. JUSTICE BUTT ON THE ALLEVIATION OF CAPITAL PUNISHMENT.

In the story of those remarkable criminal trials which Lady Duff Gordon translated nearly forty years ago, from the German of Anselm Ritter von Feuerbacb, there is an account of a poisoner, Anna Maria Zwanziger, who ap- pears to have outdone even these poor Liverpool poisoners in the number and the absolute wilfulness of her poisonings. It is said that she regarded the arsenic with which she com- mitted most of her murders "with eyes beaming with rapture." This woman, moreover, spoke of her murders,—which she confessed,—as "slight errors," boasted of her piety as "only too great" and as the origin of all her misfortunes, and entreated the Judge to permit her, if it were possible, to appear to him after her death, in order to give him ocular demonstration of the immortality of the soul. To such a one as this, appar- ently, the prospect of a future life was an " alleviation " of her shameful death, in spite of her "wicked, cruel, and base " nature. But then it was an " alleviation " only because, as is evident enough from the narrative, she was so wicked, cruel, and base, that she could not even feel the sense of shame at what she had done, and did not cower under the abhorrence of her fellow-creatures. She had not even that remnant of conscience which makes guilty men shrink from the eyes of their fellow- men, and probably she looked upon the future life as a new career for her cruel and insatiable cunning. But this is hardly the End of "alleviation " to which the excellent Judge who con- demned Mrs. Higgins and Mrs. Flanagan to death can have referred, and we cannot help feeling some regret that he should have used, however inadvertently and humanely, a phrase which tends to throw into the shade that most essential of all our ex- pectations for the future life,—the expectation that it will at least reveal to us the true horror of the evil we have committed here, be it for the ultimate cure, or be it only, as some believe, for the ultimate retribution of that eviL We deprecate heartily this and other misleading phrases in which the optimism of amiability seems to extenuate the sharp realities of the spiritual world. It is natural that those who believe that life. ends with the death of the body, should make comparatively light of the worst of all human phenomena, deadly guilt. But for those who contem- plate a resurrection, to speak of the hope of it as essentially an "alleviation" for the sufferings of guilt, seems to us a darkening of counsel ; for whatever else spiritual life may be, it must be a revelation of the true significance of good and evil here.