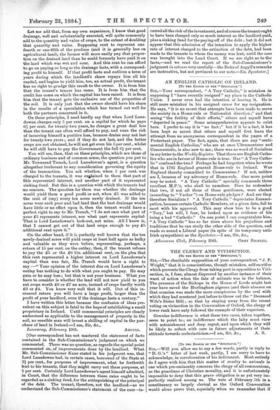 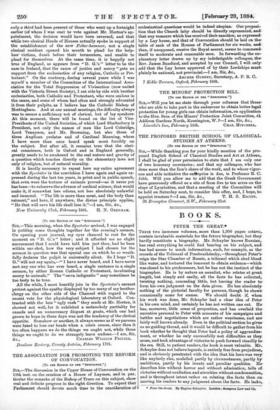 SIR,—Will you allow me to say a few words, partly in reply to "D. G.'s " letter of last week, partly, I am sorry to have to acknowledge, in corroboration of his indictment. Most entirely do I agree with him that this matter of cruelty to animals is one which pre-eminently concerns the clergy of all communions, as the guardians of Christian morality, and it is unfortunately impossible to deny that this grave obligation is as yet very im- perfectly realised among us. The vote of February 5th in a constituency so largely clerical as the Oxford Convocation would alone prove that, especially when we remember that if only a third had been present of those who went up a fortnight earlier (of whom I was one) to vote against Mr. Horton's ap- pointment, the decision would have been reversed, and that while two clerical Heads of Houses actually spoke in support of the establishment of the new Folter-kammer, not a single clerical resident opened his mouth to plead for the help- less' victims, dumb before their tormenters, and unable to plead for themselves. At the same time, it is happily not true of England, as appears from "D. G.'s " letter to be the case in Ireland, that the cause of justice and mercy "gets no support from the ecclesiastics of any religion, Catholic or Pro- testant." On the contrary, during several years while I was myself a member of the Committee of the International Asso- ciation for the Total Suppression of Vivisection (now united with the Victoria Street Society), I sat side by side with brother ecclesiastics, both Catholic and Protestant, who were zealous in the cause, and some of whom had often and strongly advocated it from their pulpits, as I believe has the Catholic Bishop of Nottingham. And at our annual meetings, the difficulty always was to secure a sufficiency not of clerical, but of lay speakers. At this moment, there will be found on the list of Vice- Presidents of the United Societies, of which Lord Shaftesbury is President, not only the names of men like Lord Coleridge, Lord Tennyson, and Mr. Browning, but also those of three Anglican prelates and of Cardinal Manning, whom I have more than once heard speak most forcibly on the subject. But after all, it remains true that the cleri- cal conscience, both in Oxford and in England generally, greatly needs to be awakened to the real nature and gravity of a question which touches directly on the elementary laws not only of religion, but of natural morality.

It is hardly necessary to repeat here my entire agreement with the Spectator in the conviction I have again and again ex- pressed during the last ten years, in print and in public speech, that even were the torture of animals proved—as it never yet has been—to subserve the advance of medical science, that would make it, if somewhat less odious, not less absolutely unlawful and immoral. "The life is more than meat, and the body than raiment," and here, if anywhere, the divine principle applies, "He that will save his life shall lose it."—I am, Sir, Sm., New University Club, February 18th. H. N. OXENHAM.