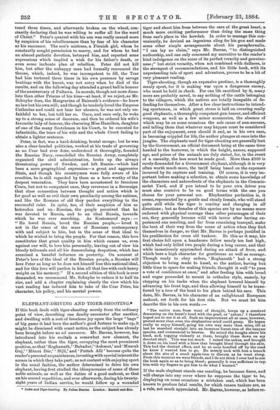 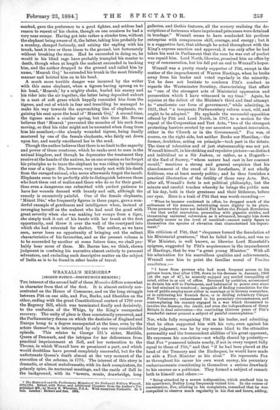 from the ordinary point of view, describing one deadly encounter after another, and dwelling with a sort of ferocious joy upon the large "bags" of big game it had been the author's good fortune to make up, it might be dismissed with scant notice, as the subject has already been brought before us ad nauseam. Mr. Barras, however, has introduced into his recitals a somewhat new element, the elephant, rather than the tiger, occupying the most prominent position, so that Roghanath," Bahadur,"Ashmut,' and 'Muarak Guj," Minut Dix," Bijli,' and Futteh .Alli ' become quite the reader's personal acquaintances, investing with special interest the scenes in which they take part; as not content with enjoying sport in the usual fashion, the author determined to drive his own elephant, having first studied the idiosyncrasies of some of these noble animals, as well as the duties of a good mahout, so that on his second expedition, and ever afterwards, during his twenty- eight years of Indian service, he would follow up a wounded

• India and Tiger-hunting. By Julius Barras. London ; Bastall and Bon.

tiger and shoot him from between the ears of the great beast, a much more exciting performance than doing the same thing from one's place in the howdah. In order to manage this con- veniently, be devised an ingenious sling for his gun and made some other simple arrangements about his paraphernalia. "I can lay no claim," says Mr. Barras, "to distinguished authorship, and can only commend my narrative to the reader's kind indulgence on the score of its perfect veracity and genuine- ness ;" but strict veracity, when not combined with dullness, is the strongest of recommendations, and his little book, with its-

unpretending tale of sport and adventure, proves to be a bit of

Tiger-shooting, though an expensive pastime, is a thoroughly manly sport, for it is making war upon a dangerous enemy, who must be held in check. For one life sacrificed by it, many more are probably saved, to say nothing of the cattle belonging to the villagers, which the natives are totally incapable of de- fending for themselves. After a few clear instructions to intend- ing sportsmen, in which great stress is laid on securing really good elephants, a thoroughly competent gun-bearer, and efficient weapons, as well as a few minor accessories, the absence of which may be on some occasions the sole cause of non-success,. and telling them that whatever may happen must be considered part of the enjoyment, even should it end, as in his own case,.

in becoming crippled for life, the author plunges at once into the- jungles. The elephants used for tiger-shooting are generally lent by the Government, an official document being at the same time handed to the borrower, in which the height, names, suppose& age, and prices of the animals are duly stated, for, in the event of a casualty, the loss must be made good. More than 2100 is- rarely demanded for a Government elephant, although it is very- often worth much more, the tariff being based on the expenses incurred by its capture and training. Of course, it is very im- portant before making a selection, to obtain some knowledge of the characters and antecedents of the elephants in the Commis- sariat Yard, and if you intend to be your own. driver yom must also contrive to be on good terms with the one you. choose for your personal use. Elephantine perfection is, it

seems, represented by a gentle and steady female, who will stand quite still while the tiger is roaring and charging in all

directions ; but as females of this species are by no means more endowed with physical courage than other personages of their sex, they generally become wild with terror after having ex- perienced one mauling, and far from remaining tranquil, make the best of their way from the scene of action when they find, themselves in danger, so that Mr. Barras is perhaps justified in his predilection for cross old tuckers. Be this as it may, his first choice fell upon a handsome fellow nearly ten feet high,. which had only killed two people during a long career, and that while incautiously approached daring an attack of fever, and which bore a high character for gentleness as well as courage.

Though ready to obey orders, Roghanath ' had a strong objection to being made to kneel, so the author, having but little time to spare for making friends, thought it well "to pass a vote of confidence at once," and after feeding him with bread and sugar proceeded to mount in orthodox style, namely, by stepping on his tusks when the elephant lowered himself by advancing his front legs, and then allowing himself to be trans- ferred by a toss of the head to his place behind his ears. this done, Mr. Baum, in his character of an enlightened European mahout, set forth for his first ride. But we must let him describe this in his own words :—

"The native man, from want of thought, keeps up a constant drumming on the beast's head with the goad, or ankus 3' I therefore hoped not to use it at all. Such an improvement all at once, however, proved more than even the elephantine mind could grasp. He began really to enjoy himself, going his own way more than mine, till at last he marched straight into an immense forest-tree of the banyair species, and commenced to browse. He seized the boughs above his head, and, togging violently at them, brought them down on my devoted skull. This was too much. I raised the online, and brought it down on his head with a blow that brought blood through the skin. This had the desired effect, and he at once bundled off by the road he knew I wanted him to go. He merely took with him a branch about the size of a small apple-tree to discuss as he went along. From this moment we were friends and I do not think I ever had to use the book again so as to bring blood ; generally it was sufficient to tap. him with my fingers to get him to do what I wanted."

If the male elephant stands one mauling, he becomes fierce, and will charge into any cover where he supposes the tiger to be, displaying on some occasions a mistaken zeal, which has been

known to produce fatal results, for which reason tuskers are, as a rule, not much appreciated. Mr. Bum, however, as before re-

marked, gave the preference to a good fighter, and seldom had reason to repent of his choice, though on one occaison he had a very near escape. Having got into rather a slender tree, without the elephant being aware of it, the latter, taking him probably for a monkey, charged furiously, and seizing the sapling with his trunk, bent it two or three times to the ground, but fortunately without breaking the stem. Had he succeeded in doing so, he would in his blind rage have probably trampled his master to death, though when at length the mahout succeeded in backing him, and the author dropped to the ground and called him by name, Ituarak Gnj ' he extended his trunk in the most friendly manner and hoisted him on to his head.

A much more terrible danger was incurred by the writer with this same elephant, when a tigress having sprung on to his head, Muarak,' by a mighty shake, hurled his enemy and • his rider into the air together, the latter being deposited unhurt

in a nest of soft grass which happily concealed him from the tigress, and out of which in fear and trembling he managed to make his way towards the approaching line of elephants, re- gaining his seat upon the head of Dluarak Guj.' A second time, the tigress made a similar spring, but this time Mr. Barras believes that Muarak ' prevented the muscles of his neck from moving, so that his rider might not be unseated when flung from him his assailant,—the already wounded tigress, being finally mastered by one of the female elephants, who fairly sat down upon her, and nearly smothered her in the mud.

• Though the author believes that there is no limit to the sagacity and power of these creatures, which he ranks next to man in the animal kingdom, and though he deprecates the treatment they receive at the hands of the natives, he on one occasion so far forgot his principles as to teaze the elephant he was riding by imitating the roar of a tiger. He, however, very nearly met with his death from the enraged animal, who never afterwards forgot the insult. Elephants seem to be perfectly able to distinguish between those who hurt them out of malice and those who do so for their good; thus even a dangerous one submitted with perfect patience to have her wounds dressed with brandy and salt, although the remedy is excessively painful. One of the female elephants, 'Mina Dar,' who frequently figures in these pages, gave a won- derful example of gentleness and intelligence when, instead of revenging herself on the mahout who had used the goad with great severity when she was making her escape from a tiger, she simply took it out of his hands with her trunk at the first opportunity, and threw it over the wall of the courtyard into which she had retreated for shelter. The author, as we have seen, never loses an opportunity of bringing out the salient characteristics of his favourites, and as the present volume is to be succeeded by another at some future time, we shall pro- bably hear more of them. Mr. Darras has, we think, shown judgment in confining his narrative almost entirely to personal adventure, and excluding such descriptive matter on the subject of India as is to be found in other books of travel.