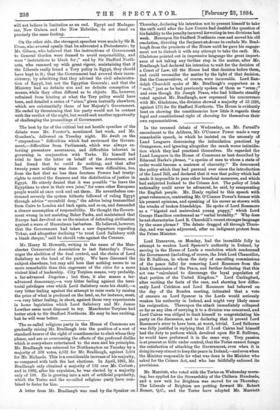 Page 2, 23 February 1884 — In the resumed debate of Wednesday, on Mr. Parnell's amendment
Close

In the resumed debate of Wednesday, on Mr. Parnell's amendment

to the Address, Mr. O'Connor Power made a very remarkable speech, in which he insisted on the anomaly of Land Leaguers denouncing the intimidation practised by Orangemen, and ignoring altogether the much worse intimida- tion which they had practised themselves. He regarded the- Land Leaguers in the House of Commons as best described by Edmund Barke's phrase, "a species of men to whom a state of order would become a sentence of obscurity." He denounced. the policy which they had pursued ever since the introduction of the Land Bill, and declared that it was that policy which had made it impossible to pass other beneficial measures, and which had subjected Ireland to the Crimes Act. The policy of Irish nationality could never be advanced, he said, by exasperating the English people. Mr. Healy replied to this speech with great vehemence, contrasting Mr. O'Connor Power's former with his present opinions, and speaking of his career as strewn with the wrecks of broken friendships. He spoke of Lord Rossmore as a "bigoted and malevolent young puppy," which Lord George Hamilton condemned as "verbal brutality." Why does he not characterise Lord R. Churchill's recent stronger language by the same phrase ? The debate dragged all through Thurs- day, and was again adjourned, after an indignant protest from the Prime Minister