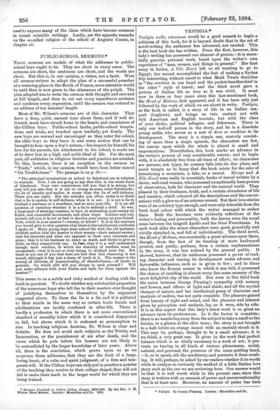 THESE sermons are models of what the addresses to public- school boys ought to be. They are short in every sense. The

sermons are short, the sentences are short, and the words are short. But this is, in our opinion, a virtue, not a fault. Were all sermon-writers to adopt the plan of a successful preacher at a watering-place in the South of France, more attention would be paid than is now given to the utterances of the pulpit. The plan adopted was to write the sermon with thought and care and at full length, and then to cut out every superfluous sentence and condense every expression, until the sermon was reduced to an address of ten minutes' length.

Most of Mr. Wilson's sermons are of this character. They have a deep, quiet, earnest tone about them, and if well de- livered, must have struck home to the hearts and consciences of the Clifton boys. Public-school faults, public-school tempta- tions and trials, are touched upon tenderly, yet firmly. The new boys are warned and encouraged as they enter the school, the older boys as they leave it, and every motive that can be brought to bear upon a boy's nature,—his respect for himself, his love for his parents, his attachment to his school, is made use of to draw him to a high and noble ideal of life. For the most part, all subtleties in religious doctrine and practice are avoided. To this, however, there is an exception in the sermon on "Truth," which, in our opinion, would have been better named "On Truthfulness." The passage is on p. 99 :—

" The principal temptations at school to falsehood are in relation to masters. Now, I am not going to say that this is the worst form of falsehood. Your own consciences tell you that it is wrong, but they tell you also that it is not so wrong as some other falsehoods ; the lie of slander and malice is worse than the lie of self-defence. There you are right. But the mistake you often make is to think that a lie is spoken in self-defence, when it is not. It is not a lie to mislead a madman or a murderer, and so save your life. It is an old question of casuistry whether it is a lie to mislead a thief. In war, a large part of strategy consists, in fact, in misleading your enemy by feints, and concealed movements, and other ways. Instinct and con- science tell you it is not as bad to deceive your enemy as your friend. Now, which is your master ?—enemy, or friend ? It is in the answers you would give to this question that there is the intellectual confusion I spoke of. Many young boys start school life with the old barbaric, childish notion that the master is their enemy—their natural enemy ; that his interests and aims are opposed to their own interests and aims ; that it is his business to exact as much, and theirs to give as little, as they respectively can. In fact, that it is a well understood though tacit warfare, in which the morality of warfare must be recognised,—that it is not so very wrong to mislead your foe. But there is not one of you that does not feel that this reasoning is not sound, although it has just a trace of truth in it. The master is the enemy of idleness, of unpunetuality, of disorderliness,—of faults in general. On which side will you choose to rank yourself ? Will you make alliance With your faults, and fight for them ogainst the master?"

This seems to us a subtle and risky method of dealing with the fault in question. We doubt whether any substantial proportion of the numerous boys who tell lies to their masters ever thought of justifying themselves to themselves by the argument suggested above. To them the lie is a lie, and it is palliated to their minds in the same way as certain trade frauds and adulterations are tacitly condoned in after-life. There is hardly a profession in which there is not some conventional standard of morality below which it is considered disgraceful to fall, but above which it is reckoned as presumption to rise. In teaching religious doctrine, Dr. Wilson is clear and definite. He does not avoid such subjects as the Trinity and Incarnation, or the punishment of sin after death, and the views which he puts before his hearers are not likely to be contradicted by the larger knowledge of later years. Above all, there is the conviction, which grows upon us as we re-peruse these addresses, that they are the fruit of a large, loving heart, of a calm and quiet judgment, of a firm and tem- perate will. if the Clifton boys can only put in practice a quarter of the teaching they receive in their college chapel, they will not fail to make their mark in the larger world for which they are being trained.