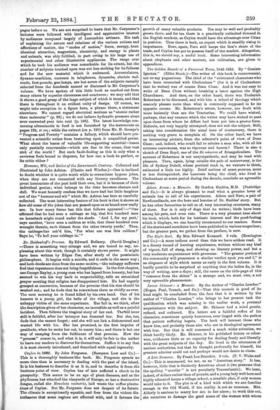 "Contain Ignotes." (Elliot Stock.)—The writer of this book is controversial, not to say pugnacious. The chief of the "celebrated characters who have been connected with Cheltenham" (for it is of Cheltenham that he writes) was of course Dean Close. And it was not easy to write of Dean Close without breaking a lance against the High Churchmen. And then, on the other baud, there was Frederick Robertson to be discussed, and with him a school of theology which scarcely pleases more than what is commonly supposed to be its opposite excess. Mr. Robertson's errors, however, are dealt with more leniently than are the Tractarian. We could have wished, perhaps, that any censure which the writer may have wished to pass upon those from whom he differs had been put into a graver form. Ridicule, not very happily attempted, does not suit the subject. Still, taking into consideration the usual tone of controversy, there is nothing very grave to complain of. On the other hand, we have an interesting picture, from the admirer's point of view, of Dean Close; and, indeed, who could fail to admire a man who, with all his extreme narrowness, was so vigorous and honest ? There is also a sketch of Dean Boyd, one of the Di minores of Evangelicalism. The account of Robertson is not unsympathetic, and may be read with pleasure. Then, again, lying outside the pale of controversy, is the life of Sydney Dobell, whose poetical rank is, we venture to think, estimated a little too highly. Brief notices of some persons, more or less distinguished, the Laureate being the chief, who lived in Cheltenham at some period during the decade, conclude an agreeable volume.