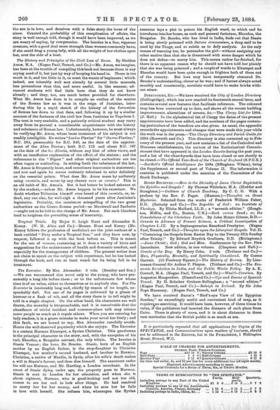 DIRECTORIES, Erc.—We have received the City of London Directory (Collingridge),

which has now reached its fourteenth annual issue, and contains several new features that facilitate reference. The coloured map has been corrected up to date, and shows all the recent building improvements, alterations of streets, &c.—The Clergy List for 1884. (J. Hall.) In the alphabetical list of Clergy the dates of the present appointments have been added, and the numbers of the pages contain- ing particulars of the benefices are also given. As usual, the appendix records the appointments and changes that were made this year while - the work was in the press.—The Clergy Directory and Parish Guide for 1884 (Bosworth and Co.) This directory is also corrected up to Feb- ruary of the present year, and now contains a list of the Cathedral and Diocesan establishments, the notices of the Ecclesiastical Commis- sioners that have appeared in the London Gazette during the past year, and a list of the churchyards that have been closed or are shortly to be closed.—The Official Year-Book of the Church of England (S.P.O.K.) —Burdett' s OS cial Intelligence for 1884 (Effingham Wilson), being the Supplement or second part of Volume II. The information it contains is published under the sanction of the Committee of the Stock Exchange.