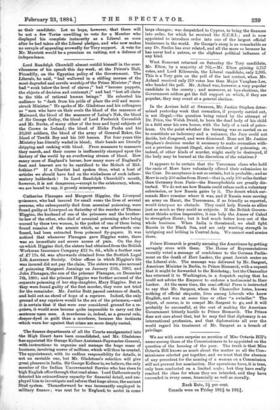 Page 3, 23 February 1884 — It appears to be certain that the Torcoman clans who
Close

It appears to be certain that the Torcoman clans who

hold the oasis of Mery have voluntarily offered their submission to the Czar. Its acceptance is not so certain, but is probable ; and as Mery is only 230 miles from Herat—that is, only 100 miles further than Germany from Paris—the Russophobists are greatly dis- turbed. We do not see how Russia could refuse such a voluntary submission, or how Russia gains by it. The desert which sur- rounds Mery remains where it was, and if Russia were moving an army on Herat, the Turcomans, if as friendly as reported, would interpose no obstacle. They could help Russia as allies just as much as they could as subjects. If the British Govern- ment thinks action imperative, it can help the Ameer of Cabal to strengthen Herat ; but it had much better keep out of the whole business. When India is threatened, we shall fight Russia in the Black Sea, and are only wasting strength in intriguing and bribing in Central Asia. We cannot send armies there.