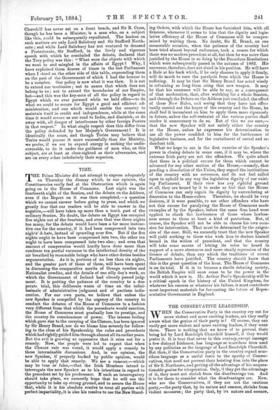 THE Prime Minister did not attempt to express adequately on Thursday the dismay which, in our opinion, the Constituencies really feel at the Obstruction which is again going on in the House of Commons. Last night was the fourteenth night of the Session, and the debate on the Address, even if the Report on it was then completed,—a question which we cannot answer before going to press, and which we • greatly fear that our readers will be able to answer in the negative,—will have taken up more than a tenth part of the ordinary Session. No doubt, the debate on Egypt has occupied five nights out of the fourteen, and even that was three nights too many, for the debate would have been a far more instruc- tive one for the country, if it had been compressed into two nighls' debate, instead of sprawling over five. But if the five nights ought to have been compressed into two, the other ten ought to have been compressed into two also ; and even that amount of compression would hardly have done more than condense ten partial vacuums to the intellectual density of the air breathed by reasonable beings who have other duties besides argumentation. As it is, portions of no less than six nights, and the greater part of those of three, will have been spent in discussing the comparative merits of Orange rowdies and Nationalist rowdies, and the details of one silly day's work, on which the Government of Ireland had already passed judg- ment. It is putting the patience of the country to a des- perate trial, this deliberate waste of time on the infini- tesimals of administrative judgment and of partisan indis- cretion. For our own parts, we believe that unless the new Speaker is compelled by the urgency of the country to conduct the debates of the House of Commons in a fashion very different from that which the precedents would sanction, the House of Commons must gradually lose its prestige, and the country its consciousness of power. The intense feeling which gave rise to the carrying of the Closure, has been ignored by Sir Henry Brand, nor do we blame him severely for follow- ing to the close of his Speakership the rules and precedents which had rightly guided him through almost all its earlier years. But the evil is growing so oppressive that it cries out for a remedy. Now, the people were led to expect that when the Closure rule was voted, it would apply a remedy to these interminable discussions. And, in our opinion, the new Speaker, if properly backed by public opinion, would be able to apply that remedy. We see a rumour,—which may be true or false,—that the Irish Members intend to interrogate the new Speaker as to his intentions in regard to the precedent set by his predecessor. N such an interrogatory should take place, we earnestly hope that he will use the opportunity to take up strong ground, and to assure the House that, while it is his absolute resolve to treat all parties with perfect impartiality, it is also his resolve to use the New Stand- ing Orders, with which the House has furnished him, with all firmness, whenever it seems to him that the dignity and legis- lative efficiency of the House of Commons will be compro- mised by waiving them. No doubt, Sir H. Brand, on one memorable occasion, when the patience of the country had been tried almost beyond endurance, took a course for which there was no modern precedent at all, but then he was more than justified by the House in so doing by the Procedure Resolutions which were subsequently passed in the autumn of 1882. His successor, therefore, does not stand in his position. He will have a Rule at his back which, if he only chooses to apply it firmly, will do much to cure the paralysis from which the House is suffering. It may be that Sir Henry Brand has acted wisely in refraining so long from using that new weapon. It may be that his successor will be able to say, as a consequence of that moderation, that, after watching for a whole Session, and through the Debate on the Address just concluded, the effect of these New Rules, and seeing that they have not effec- tually carried out the hopes of the country and the House, he shall feel it incumbent on him to apply them more rigorously in future, unless the self-restraint of the various parties shall render it unnecessary to do so. But of this we are sure,— that the new Speaker will not satisfy either the country or the House, unless he expressess his determination to use all the power confided to him for the furtherance of legislative business, and for the curtailment of unreal and re- dundant talk.

What we hope to see is the first exercise of the Speaker's power in closing debate in some case, if it may be, where the extreme Irish party are not the offenders. We quite admit that there is a political excuse for them which cannot be advanced for any other section of the House,—namely, that pending a dissolution of the Union, they regard the institutions of the country with no reverence, and do not feel called upon to uphold in any way the legislative dignity of our exist- ing Parliament. If their view has any rightful ground at all, they are bound by it to make us feel that the House of Commons can only regain its dignity by surrendering at discretion to the Home-rulers. Therefore, we should be very desirous, if it were possible, to see other offenders who have not this excuse for paralysing the House of Commons made examples of by the Speaker, before the same firm hand were applied to check the lawlessness of those whose lawless- ness seems to them at least a kind of patriotism. But, of course, the Speaker will not be able to choose his own occa- sion for intervention. That must be determined by the exigen- cies of the case. Still, we earnestly trust that the new Speaker will yield nothing to those who wish him to declare himself bound in the withes of precedent, and that the country will take some means of letting its voice be heard in support of a more strenuous and more steady repression of the licence of debate, than any which the traditions of recent Parliaments have justified. The country should know that this is the great question of the hour. The House of Commons is on its trial. If it is to become a sterile debating society, the British Empire will soon cease to be the power in the world which it now is. Mr. Arthur Peel's Speakership will be a critical epoch in the history of the United Kingdom, for whatever his success or whatever his failure, it must contribute most important materials for forecasting the future of Repre- sentative Government in England.