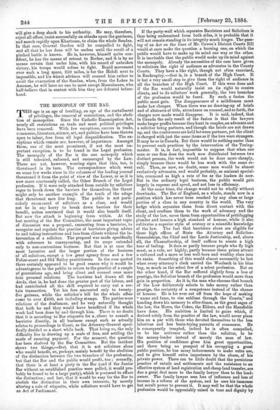 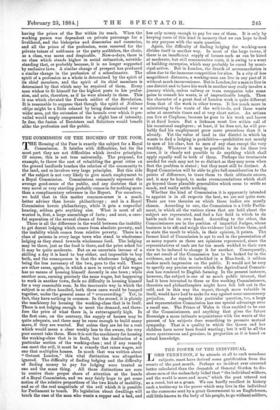 THE MONOPOLY OF THE BAR.

now more courteously called, the Other Branch of the Legal profession. If it were only attacked from outside by solicitors eager to break down the barriers for themselves, the threat might only be another example of the truth of the adage that threatened men live long. The public is not parti- cularly enamoured of solicitors as a class, and would not be in any hurry to break down barriers for their benefit, unless convinced that it would also benefit itself. But now the attack is beginning from within. At the last meeting of the Bar Committee, the most important topic of discussion was a proposal, emanating from a barrister, to recognise and regulate the practice of barristers giving advice to and taking instructions and fees from clients without the in- tervention of a solicitor. The proposal was made specifically with reference to conveyancing, and its scope extended only to non-contentious business. But that is at once the most lucrative and the larger portion of the business of all solicitors, except a few great agency firms and a few Police-court and Old Bailey practitioners. In the case quoted there certainly appeared to be good reason why it would be advantageous to the public to return to the practice of a couple of generations ago, and bring client and counsel once more into personal relations. The barrister had drawn all the deeds, that is, he had done the greater part of the labour, and had contributed all the skill required to carry out a cer- tain transaction. Yet his fees amounted only to twenty- five guineas, while the solicitor's bill for the whole affair came to over £400, not including stamps. The parties were relations of the draftsman, and he very naturally thought that both he and they would have benefitted if the whole work had been done by and through him. There is no doubt that it is according to Bar etiquette for a• client to consult a barrister directly, in all business except such as actually relates to proceedings in Court, as the Attorney-General speci- fically decided so a short while back. That being so, the only difficulty lies in drawing up a scale of fees, and settling the mode of ensuring payment. For the moment, the question has been shelved by the Bar Committee. But the incident shows two things,—first, that it is not solicitors alone who would benefit, or, perhaps, mainly benefit by the abolition of the distinction between the two branches of the profession, but that the Bar and the public would profit, too ; secondly, that there is at least a party in the Bar (and if the Junior Bar without an established practice were polled, it would pro- bably be found to be a large party), which is prepared to efface the distinction ; and last, that it would be easy for the Bar to abolish the distinction in their own interests, by merely altering a rule of etiquette, while solicitors would have to get an Act of Parliament.

If the party-wall which separates Barristers and Solicitors is thus being undermined from both sides, it is probable that it will not remain standing in its integrity much longer. The pass- ing of an Act on the lines of Mr. Cowen's District Courts Bill would at once make the question a burning one, on which the public would have to make up its mind one way or the other. It is inevitable that the public would make up its mind against the monopoly. Already the necessities of the case have given to solicitors the right of audience as advocates in the County Courts. They have a like right, though not often exercised, in Bankruptcy,—that is, in a branch of the High Court. It

all the branches of the High Court. If this were done and if the Bar would naturally insist on its right to receive clients, and to do solicitors' work generally, the two branches of the profession would be fused. By such a fusion the public must gain. The disappearance of a middleman must make law cheaper. When there was no drawing-up of briefs and of ahstracts of title, attendance on counsel, and so forth, the charges now made would disappear. It is said, indeed, that in Canada the only result of the fusion is that the lawyers make larger profits because they hunt in couples, an advocate and a solicitor being partners, and though the briefs are not drawn up, and the conferences are held between partners, yet the client is charged with just the same items as if the two were strangers. It may be so in Canada. But there would be nothing easier than to prevent such practices by the intervention of the Taxing- master. It is, in fact, impossible to suppose that when one man or one firm does the work now distributed between two distinct persons, the work would not be done more cheaply, simply because there would be less work with the same re- sult. Then, as now, no doubt, some men would be almost exclusively advocates, and would probably, as eminent special- ists, command as high a rate of fee as the leaders do now. But in the ordinary legal business, the public would gain largely in expense and speed, and not lose in efficiency.

At the same time, the change would not be wholly without drawbacks. The Bar of England, as a whole, stands now in a position which has never been reached by any class or large portion of a class in any country in the world. The very hedge which separates them from direct contact with the client, and confines them to the work of advocacy and the study of the law, saves them from opportunities of pettifogging plunder and insures a high standard of honour, while it also cultivates a superior style of oratory or a scientific knowledge of the law. The fact that barristers alone are eligible for those high offices of State the Attorney and Solicitor- Generalships, the Chief and the Lords Justiceship, and, above all, the Chancellorship, of itself suffices to create a high tone of feeling. It does so partly because people who fly high must, as a rule, act highly, partly because these prizes attract a cultured and a more or less well-born and wealthy class into its ranks. Something of this would almost necessarily be lost when every attorney's clerk carried the Woolsack in his blue bag, as much as the select few of a select profession. But on the other hand, if the Bar suffered slightly from a loss of prestige, the Solicitor branch of the profession would more than gain in proportion. As it is, the man who chooses that branch of the Law deliberately selects to take money rather than prestige, the certainty of a competence instead of the chance of honour. He is for ever cut off from the hope of making "name and fame, to rise sublime through the Courts," and handing down his memory to after-times, as the great sages of the law, the Mores, the Cokes, the Eldons, and the Mansfields

have done. His ambition is limited to gains which, if derived solely from the practice of the law, would never place him on a par with those who devoted themselves to the less laborious and less brain-trying pursuits of commerce, He is consequently tempted, indeed he is often compelled, to be the scrivener rather than the solicitor, to be the money-lender instead of merely the man of law. His position of confidence gives him great opportunities, and there being no prospect of his occupying a great public position, he has many inducements to make extra use, and to give himself extra importance by the abuse, of his private power. There can be little doubt that the pernicious practice of entails and settlements and the resistance to an effective system of land registration and cheap land transfer, are due a great deal more to the family lawyer than to the land- owner. The family lawyer sees loss of influence and loss of income in a reform of the system, and he uses his immense but occult power to prevent it. It may well be that the whole profession would be appreciably raised in tone and dignity by

having the prizes of the Bar within its reach. When the working parson was dependent on private patronage for a livelihood, and' the bishoprics and deaconries and canonries, and all the prizes of the profession, were reserved for the private tutors of noblemen or the party scribblers, the cleric, as a class, was mean and despicable. Now-a-days, there is no class which stands higher in social estimation, notwith- standing that, or probably because, it is no longer supported by exclusive laws. A similar change of prospect has produced a similar change in the profession of a schoolmaster. The spirit of a profession as a whole is determined by the spirit of its chief members, and the spirit of its chief members is determined by that which may be required of them. Every man wishes to fit himself for the highest posts in his profes- sion, and acts, therefore, as if he were already in them. This it was which elevated the French soldier of the Revolution. It is reasonable to suppose that though the spirit of Noblesse oblige might be a little relaxed by being disseminated over a wider area, yet the extension of the bounds over which it pre- vailed would amply compensate for a slight loss of intensity. In fine, the fusion of Barristers and Solicitors would benefit alike the profession and the public.