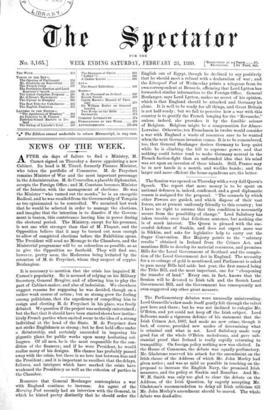 Page 1, 23 February 1889 — The Session was opened on Thursday with a very dull
Close

The Session was opened on Thursday with a very dull

Queen's Speech. The report that more money is to be spent on national defences is, indeed, confirmed, and a good diplomatic reason is assigned for the proposal. " The counsels by which other Powers are guided, and which dispose of their vast forces, are at present uniformly friendly to this country ; but I have no right to assume that this condition is necessarily secure from the possibility of change." Lord Salisbury has taken trouble over that felicitous sentence, but nothing else is of much interest. The Queen is pleased with the suc- cessful defence of Suakin, and does not expect more war in Sikkim, and asks for legislative help to carry out the Sugar Convention. Her Majesty points to the " salutary results " obtained in Ireland from the Crimes Act, and mentions Bills to develop its material resources, and promises Bills for the Local Government of Scotland and the comple- tion of the Local Government Act in England. The necessity for a re-coinage of gold is mentioned, and Parliament is asked to pass many Bills laid aside last year, the first named being the Tithe Bill, and the most important, one for " cheapening the transfer of land." Every one, in fact, knows that the Session will be devoted to Irish talk and the Scotch Local Government Bill, and the Government has consequently not even suggested any other great measure.