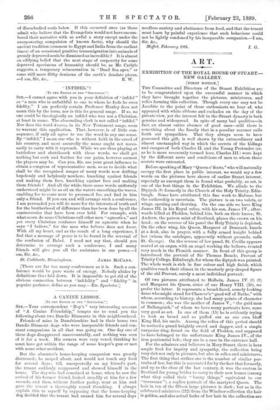 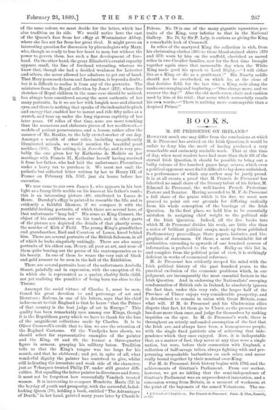 EXHIBITION OF THE ROYAL HOUSE OF STUART.- NEW GALLERY.

THE Committee and Directors of the Stuart Exhibition are to be congratulated upon the successful manner in which they have brought together the pictures, miniatures, and relics forming this collection. Though every one may not be Jacobite to the point of those enthusiasts we hear of, who appeared with white ribbons and cockades on the day of the private view, yet the interest felt in the Stuart dynasty is both genuine and widespread. In spite of many bad qualities—in fact, an almost entire absence of good ones—still there is something about the family that in a peculiar manner calla forth our sympathies. That they always seem to have possessed this gift, is well shown by the extraordinary and almost unexampled way in which the secrets of the hidings and escapes of both Charles II. and the Young Pretender (or, as he is more reverently termed here, Charles III.) were kept by the different sorts and conditions of men to whom those secrets were entrusted.

Before speaking of Mary "Queen o' Scots," who will naturally occupy the first place in public interest, we would say a few words on the pictures here shown of earlier Stuart interest, especially as amongst them is found what probably, as art, is one of the best things in the Exhibition. We allude to the Diptych (8) formerly in the Church of the Holy Trinity, Edin- burgh. Some have attributed this fine work to Mabuse, but the authorship is uncertain. The picture is on two volets, or wings, opening and shutting. On the one side we have King James III. in his Royal robes, with his son, James IV., after- wards killed at Flodden, behind him, both on their knees; St. Andrew, the patron saint of Scotland, places the crown on his- head ; on the reverse of his panel the Holy Trinity is depicted._ On the other wing, his Queen, Margaret of Denmark, kneels- at a desk, also in prayer, with a fully armed knight behind her (whom the catalogue, apparently without grounds, calla St. George). On the reverse of her panel, St. Cecilia appears. seated at an organ, with an angel working the bellows, treated very much in the Flemish manner. In front of this group is introduced the portrait of Sir Thomas Boucle, Provost of Trinity College, Edinburgh, for whom the diptych was painted. The whole work is rich in fine colour and high finish, which qualities reach their climax in the masterly grey-draped figure of the old Provost, surely a most individual portrait.

Of two pictures attributed to Holbein, James IV. (?) (9)• and Margaret his Queen, sister of our Henry VIII. (10), we prefer the latter. It represents a broad-faced, comely looking dame who might stand for Chaucer's " good wif of Bathe," with whom, according to history, she had many points of character in common ; she was the mother of James V., " the quid man of Ballanguich," of whom we have many portraits here, none very good as art. In one of them (15) he is evidently trying to look as broad and as puffed out as our own bluff" King Hal, his uncle. Among the relics of this period should be noticed a grand knightly sword and dagger, and a simple turquoise ring, found on the field of Flodden, and supposed to have belonged to the unfortunate King James IV., of the iron penitential belt ; they are in a case in the entrance hall.

For the admirers and believers in Mary Stuart., there is here ample food for inquiry and sympathy, the collection being very rich not only in pictures, but also in relics and miniatures. The first thing that strikes one is the number of similar por- traits of her, but this is accounted for by the fact that formerly, and up to the close of the last century, it was the custom in Scotland for young brides to carry to their new homes (among what they called their " bonny things," equivalent to our "trousseau "), a replica portrait of the martyred Queen. The hair in ten of the fifteen large pictures is dark ; but as in the celebrated miniature (212) from the Windsor collection the hair is golden, and also actual locks of her hair in the collection are

of the same colour, we must decide for the latter, which has also tradition on its side. We would notice here the cast of the Queen's face from her effigy at Westminster Abbey, where she lies not far from her great rival. It might prove an interesting question for discussion by phrenologists why Mary, who, though so ready to lose her heart to men, but without the power to govern them, has such a fine development of fore- head. On the other hand, the great Elizabeth's cranial capacity appears small, the line of forehead retreating, whereas we know that, though she had a decided weakness for Leicester and others, she never allowed her admirers to get out of hand. That Mary possessed charm and fascination, is beyond a doubt ; but it is difficult to realise it from any of the portraits. The miniature from the Royal collection by Janet (212), whose five sketches of Royal children in the same case should be noticed, has always been considered among the most authentic of her many portraits. In it we see her with longish nose and almond eyes, and there is nothing that speaks of the indomitable pluck and energy that enabled her to mount and ride fifty miles at a stretch, and bear up under the long rigorous captivity of her later years. Of relics of that time, none are more touching than the numerous and elaborate pieces of her needlework,— models of patient perseverance, and a lesson, rather after the manner of Mr. Ruskin, to the lady crewel-worker of our day. Amongst a wealth of other• relics, including magnificently illuminated missals, we would mention the beautiful pearl necklace (308). The setting is in fleur-de-lys, and is very pro- bably the one given her by Katherine de Medicis on her marriage with Francis II., Katherine herself having received it from her father, who had laid the unfortunate Florentines under a heavy tax to purchase it. We must not omit the pathetic but collected letter written by her to Henry III. of France on February 8th, 1587, just six hours before her execution.

We now come to our own James I., who appears in his best light as a funny little urchin on his knees at his father's tomb ; this is an interesting picture (46), attributed to Lucas de Heere. Darnley's effigy is painted to resemble the life, and is evidently a faithful likeness, if we compare it with the youthful-looking portraits, of which there are several here, of that unfortunate " lang lad." His arms as King Consort, the object of his ambition, are on his tomb, and in other parts of the picture are depicted the details of that ghastly scene, the murder of Kirk o' Field. The young King's grandfather and grandmother, Earl and Countess of Lenox, kneel behind him. There are several portraits of the British Solomon, in all of which he looks singularly unkingly. There are also many portraits of his eldest son, Henry, all poor as art, and none of them quite bearing out the praise of his contemporaries as to his beauty. In one of them he wears the very suit of black and gold armour to be seen in the hall of the Exhibition.

There are several portraits here of the unfortunate Arabella Stuart, painfully sad in expression, with the exception of 65, in which she is represented as a quaint, chubby little child, not yet realising the penalties of being born too close to the TInrone.

Amongst the social virtues of Charles I., must be men- tioned his great devotion to and patronage of art and literature ; Rubens, in one of his letters, says that his chief inducement to visit England is that he hears " that the Prince of that country is the best judge of art in Europe." This quality has been remarkably rare among our Kings, though it is the Republican party which we have to thank for the loss of the magnificent collections made by Charles. It is to Oliver Cromwell's credit that to him we owe the retention of the Raphael Cartoons. Of the Vandycks here shown, we should select for representative examples of the painter and the King, 68 and 69, the former a three-quarter figure in armour, grasping his military baton. Tradition tells us that the King's tongue was too large for• his mouth, and that he slobbered ; and yet, in spite of all, what wonderful dignity the painter has contrived to give, whilst

still indicating the irresolute and weak side of the character, just as Velasquez treated Philip IV. under still greater diffi- culties. Not equalling the latter painter in directness and force, it must not be forgotten bow successfully Vandyck treated women. It is interesting to compare Henrietta Maria (72) in the heyday of youth and prosperity, with the sorrowful, faded- looking Queen (70), holding a book, entitled " The Advantages of Death," in her hand, painted many years later by Claude le

Febvre. No. 78 is one of the many gigantic equestrian por- traits of the King, very inferior to that in the National Gallery. No. 76, by Sir P. Lely, is curious as giving the King a remarkable look of Cromwell.

In relics of the martyred King the collection is rich, from his christening clothes (385) to those blood-stained shirts (370 and 373) worn by him on the scaffold, cherished as sacred relics in two Cavalier families, now for the first time brought together again since that memorable day when the White King made good his speech to Lord Digby,—" I will either live as a King, or die as a gentleman !" His Naseby saddle should not be overlooked, on which he, at the close of that decisive field, for the last time a King, rode along the ranks encouraging and imploring,—" One charge more, and we recover the day !" Also the old moth-eaten chair and cushion used by him at his trial : that scene which sorrowfully recalls his own words,—" There is nothing more contemptible than a despised Prince."