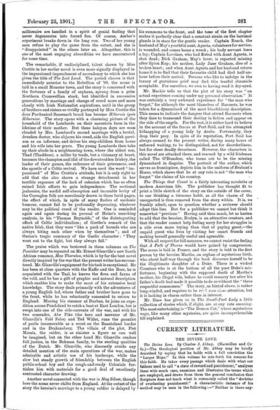 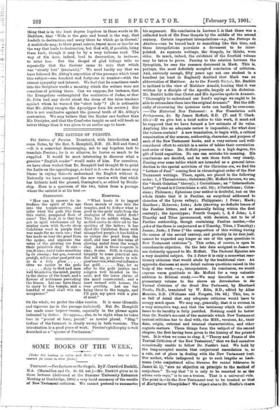 The Divine Love. By Charles J. Abbey. (Macmillan and Co- 6s.)—The theological position of Mr. Abbey may be briefly described by saying that he holds with a full conviction the "Larger Hope." In this volume he sets forth his reasons for this faith. He takes every passage which deals with what our fathers used to call "a state of reward and punishment," analyses them with much care, examines and illustrates the terms which are employed, and draws from them the general conclusion that Scripture does not teach what is commonly called the "doctrine of everlasting punishment." A characteristic instance of his method may be seen in the following :—" Neither is there any. thing that is in the least degree hopeless in those words in St. Matthew, that Wide is the gate and broad is the way, that leadeth to destruction, and many there be which go in thereat.' A multitude may, to their great sorrow, travel more or less far on the way that leads to destruction, but God will, if possible, bring them back, though it may be by a very toilsome road. The way of Sin does, indeed, lead to destruction, to enra'Asiav, to utter loss. But the Gospel of glad tidings tells us repeatedly that the Saviour came to save that which was 'utterly lost' (asroXceX45)." We need. hardly say that we have followed Mr. Abbey's exposition of the passages which treat this subject—one hundred and forty-one in number—with the utmost sympathy and interest. We feel that he sometimes reads into the Scripture words a meaning which the writers were not conscious of putting there. Can we suppose, for instance, that the Evangelists contemplated. the restitutioa of Judas, or that St. John had any doubt about the doom of the false teachers against whom he warned the "elect lady " ? (It is noticeable that Mr. Abbey excepts the Apocalypse from his review.) But this is not conclusive against the general truth of Mr. Abbey's contention. We may believe that the Master saw further than His Disciples, and that the Comforter taught us and will teach us better things than it was given to an earlier age to know.