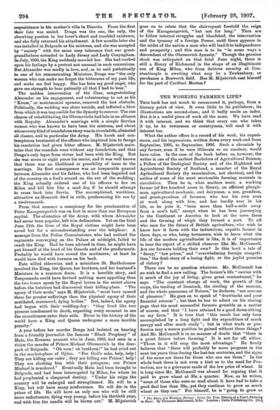 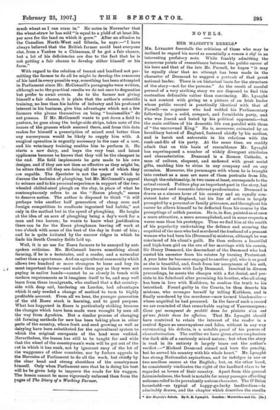 This book has not much to recommend it, perhaps, from a literary point of view. It owes little to its publishers; its illustrations are second-class; and it badly needs an index. But it is a useful piece of work all the same. We have read it with interest, and we think that every one who takes it up, be he townsman or countryman, will read it with interest too.

What the author offers is a record of his work, his experi- ences, and his impressions, written down every week-end from September, 1905, to September, 1906. Such a chronicle by any 'farmer, even if he were illiterate or an amateur, would have value. In the case of the book before us, however, the writer is one of the earliest Bachelors of Agricultural Science, a Fellow of the Geological Society and of the Highland and Agricultural Society of Scotland, a member of the Royal Agricultural Society (by examination, not election), and the author of some of the most serviceable farming manuals in circulation. Then he is, what matters more, a working farmer (of five hundred acres in Essex), an efficient plough. man, agricultural mechanic, and dairyman, a son, grandson, and great-grandson of farmers, who has his own sons at work along with him, and has hardly ever in his life, as he puts it, "been more than half-a-mile away from a cow's tail," except when he has been journeying to the Continent or America to look at the cows there and the farming of which they formed a part. To all who care for the future of British agriculture, who wish to know how it fares with the industrious, capable farmer in these days, or who, being townsmen, wish to learn what the life of the modern agriculturist is like, it is of importance to hear the report of a skilled observer like Mr. McConnell. Are our farmers bolding their own P Is this book a tale of "decay," "low prices," and "overwhelming foreign competi- tion," the drab story of a losing fight, or the joyful promise of victory ?

There can be no question whatever. Mr. McConnell has no wish to find a new calling. The farmer's life " carries with it much of the joy of living, gives great contentment," he says. "The constant change of work, the growth of the crops, the tending of livestock, the circling of the seasons, and the whole panorama of Nature," be declares, "are sources of pleasure." He goes on to speak of "drawbacks and poor financial returns" ; but then he has to admit on his closing page that the most successful farmers grumble as a matter of course, and that "I have attained to a good down-sitting on my farm." It is true that " this result has only been. accomplished by a long fight and the expenditure of much energy and after much study "; but in what trade or pro- fession may a secure position be gained without these things ? And Mr. McConnell is in no manner of doubt that "there is a great future before farming." It is not far off, either. . "Those in it will reap the most advantage." He firmly believes that "there will probably be more progress in the next ten years than during the last ten centuries, and the signs of the same are there for those who can see them." In the whole book there is not even a hint as to the need for Pro- tection, nor is a grievance made of the low price of wheat. It is long since Mr. McConnell was abused for arguing that it paid to grow wheat at 30s. a quarter. Now, as he writes, "some of those who were so mad about it have had to take a. good deal less than 30s., yet they continue to grow as much wheat as they can," For himself, he is " going to grow as

• The Diary of a Working Parma, being the True Hid ory of a Year's Farming In Essex. By Primrose McConnell, B.Sc. London : Cable Publishing Co. DM.]

much wheat as I can cram in." He notes in November that the wheat-straw he has sold "is equal to a yield of at least 30a. per acre for the land on which it grew." After an allusion to

the Canadian North-West and Siberia, he says I have always believed that the British farmer could beat everyone else, from a Yankee to a Chinaman, if he got a fair chance, but a lot of his deficiencies are due to the fact that he is not getting a fair chance to develop either himself or his farm."

With regard to the relation of tenant and landlord not per- mitting the farmer to do all he might to develop the resources of his land in every possible way, something has been attempted in Parliament since Mr. McConnell's paragraphs were written, although as to the practical results we do not care to dogmatise but prefer to await events. As to the farmer not giving himself a fair chance, it is plain that the author's scientific training, no lees than his habits of industry and his profound interest in his business, give him advantages which not a fe'w farmers who plume themselves on being "businesslike" do not possess. If Mr. McConnell wants to put down a field to pasture, he goes along the hedge-side strips, takes note of the names of the grasses whieh succeed there, and from this data makes for himself a prescription of mixed seed better than any nurseryman would be likely to supply him with. A surgical operation is urgently necessary in the case of a cow, and his veterinary training enables him to perform it. He starts a new dairy, and buys the very best and latest appliances because he knows that they will be the cheapest in the end. His field implements he gets made to his own designs, and if they are not then as effective as they might be, he alters them till they are doing all the work of which they are capable. The Spectator is not the paper in which to discuss the technics of ploughing, but Mr. McConnell's appeal to science and to his personal experience in support of the two- wheeled chilled-steel plough on the clay, in place of what be contemptuously refers to as the " Saxon plough," seems to deserve notice. The author is disposed to think "it will perhaps take another half generation of cheap corn and foreign competition to eradicate ingrained bad habits," not only in the method but in the speed of ploughing. He laughs at the idea of an acre of ploughing being a day's work for a man and two horses; he wants to know what justification there can be for the Essex ploughman leaving off work at two o'clock with some of the best of the day in front of him; and he is quite irritated by the narrow ridges in which he finds his South Country fields laid up.

Well, it is no use for Essex farmers to be annoyed by out- spoken criticism. Mr. McConnell knows something about farming, if he is a teetotaler, and a reader, and a naturalist rather than a sportsman. And an agricultural community which allows two hundred or more strangers to lease and buy its most important farms—and make them pay as they were not paying, in native bands—cannot be as closely in touch with modern requirements as it imagines itself to be, and may well learn from these immigrants, who realised that a flat country- Side with deep soil, bordering on London, had advantages which it only needed a change of method to turn to highly profitable account. From all we hear, the younger generation of the old Essex stook is learning, and to good purpose. What has happened in Essex is particularly striking because the changes which have been made were wrought by men all the way from Ayrshire. But a similar process of changing old farming methods for new has been taking place in other parts of the country, where fruit and seed growing as well as dairying have been substituted for the agricultural system to which the original occupants of the land were wedded. Nevertheless, the lesson has still to be taught far and wide that the wheel of the eountryman's wain will be got out of the rut in which it has sunk, not by ignorant envy of the lot of the waggoners of other countries, nor by forlorn appeals to the Hercules of Parliament to do all the work, but chiefly by the clear head and strong shoulders of the countryman himself. Only when Parliament sees that he is doing his best will he be given help to improve the roads for his waggon. The lesson cannot be more vigorously enforced than from the pages of The Diary of a Working Farmer.