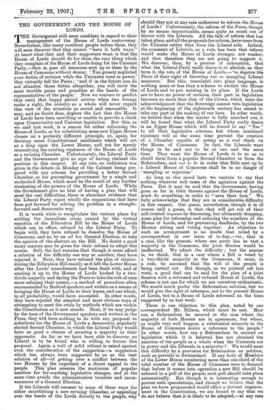 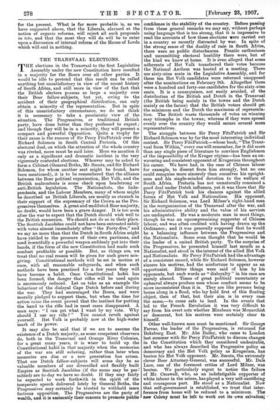 THE GOVERNMENT AND THE HOUSE OF LORDS.

THE Government still seem confident in regard to their management of the House of Lords controversy. Nevertheless, like many excellent people before them, they will soon discover that they cannot "have it both ways.' At heart what they and their supporters want is that the House of Lords should do for them the very thing which they complain of the House of Lords doing for the Unionist Party,that is, pass all measures sent up to them by the House of Commons without demur. You grossly neglected your duties of revision while the Unionists were in power,' they virtually tell the Peers ; and if in the future you do not abandon those duties altogether, you will incur the most terrible pains and penalties at the hands of the representatives of the people.' Now we venture to predict that until that happy period arrives when two wrongs make a right, the country as a whole will never regard this view of the situation as sound and reasonable. It may, and no doubt does, deplore the fact that the House of Lords have been unwilling or unable to provide a check upon Conservative and Unionist legislation. But this, as we said last week, is a reason for either reforming the House of Lords, or for substituting some new Upper House chosen on a perfectly different principle, or, again, for devising some Constitutional machinery which will act as a drag upon the Lower House, and not for merely intensifying the existing weakness of the House of Lords as a revising Chamber. Unfortunately, the Liberal Party and the Government give no sign of having realised the position in this respect. At any rate, no indication was given in the debate on Monday of the Cabinet being pre- pared with any scheme for providing a better Second Chamber, or for preventing government by a single and unchecked House, which must be the result of any further weakening of the powers of the House of Lords. While the Government give no 'hint of having a plan that will meet the real difficulties, there is abundant evidence that the Liberal Party reject wholly the suggestions that have been put forward for solving the problem in a straight- forward and democratic way.

It is worth while to recapitulate the various plans for settling the immediate crisis caused by the virtual rejection of the Education Bill by the House of Lords which are, in effect, refused by the Liberal Party. To begin with, they have refused to dissolve the House of Commons, and so, by an ad hoc General Election, to take the opinion of the electors on the Bill. No doubt a good many reasonkmay be given for their refusal to adopt this course. Still, the fact remains that though it must afford a solution of the difficulty one way or another, they have rejected it. Next, they have refused the plan of reintro- ducing the Education Bill exactly as it left the Lower House after the Lords' amendments had been dealt with, and of sending it up to the House of. Lords backed by a two- thirds majority and daring the Peers to take the risk of once more refusing their assent,—a method of procedure often recommended by Radical speakers and writers as a means of bringing the House of Lords to their knees, and one which, in. all probability, would have succeeded. In other words, they have rejected the simplest and most obvious ways of attempting to meet the crisis by methods which are within the 'Constitution as it now stands. Next, if we may judge by the tone of the Government speakers and writers in the Press, they will have nothing to do with any proposal to substitute for the House of Lords a democratic, popularly elected Second Chamber, in which the Liberal Party would have as gocid a chance of securing a majority as their opponents. As far as we have been able to discover, no Liberal is to be found who is willing to favour this proposal. Again, a wall of solid refusal is raised against even the consideration of the suggestion—a suggestion which has always been supported by us as the best solution of all—of getting over a conflict between the two Houses by the expedient of a direct appeal to the people. This plan ensures the maximum of popular sanction for far-reaching legislative changes, and at the same time avoids the administrative troubles and incon- veniences of a General Election.

If the Liberals will consent to none of these ways for either establishing a new revising Chamber, or appealing over the heads of the Lords directly to the people, why should they not at any rate endeavour to reform the House of Lords? Unfortunately, the reform of the Peers, though by no means impracticable, seems quite as much out of favour with the Liberals. All the talk of reform that has taken place, and all the proposals for reform, have come from the Unionist rather than from the Liberal side. Indeed, the comment of Liberals, as a rule, has been that reform would make the House of Lords stronger, not weaker, and that therefore they are not going to support it. We discover, then, by a process of exhaustion, that what the Liberal Party really desire is to abolish, as they term it, the veto of the House of Lords,—' to deprive the Peers of their right of throwing out or mangling Liberal measures.' But this, translated into plain language, is nothing more or less than a scheme to abolish the House of Lords and to put nothing in its place. If the Lords are to have no power of revision, their part in legislation becomes no more than that of the Crown, which since the acknowledgment that the Sovereign cannot veto legislation at the beginning of the eighteenth century has ceased to take any part in the making of our laws. In other words, we believe that when the matter is fully searched out, it will be found that what the Liberal Party really desire is an Upper House which will be forced to say " Yes " to all their legislative schemes, but whose continued existence will at the same time prevent the creation of a Chamber capable of acting as a real check on the House of Commons. In fact, the Liberals want things to be and not to be at one and the same time. They want the House of Lords to be so as to shield them from a popular Second Chamber or from the Referendum, and not to be in order that Bills sent up by a Liberal House of Commons shall be in no danger of ' mangling or rejection.'

As long as this mood lasts we venture to say that nothing whatever will come of the agitation against the Peers. But it may be said that the Government, having gone so far in their threats against the House of Lords, must do something in order to " save their face." We fully acknowledge that they are in considerable difficulty in this respect. Our guess, nevertheless, though it is of course only a guess, is that they will get out of their self-created impasse by discussing, but ultimately dropping, some plan for reforming and reducing the numbers of the House of Lords, and for preventing deadlocks, by the two Houses sitting and voting together. An objection to such an arrangement is no doubt that noted by a correspondent in our issue of to-day,—viz., that in a case like the present, where one party has so vast a majority in the Commons, the joint Session would be ineffectual. We admit the difficulty ; but the answer is, we think, that in a case where a Bill is voted by a two-thirds majority in the Commons, it must, as a rule, be assumed that the will of the people is being carried out. But though, as we pointed out last week, a good deal can be said for the plan of a joint Session with a reformed and reduced House of Lords, the scheme is not one for which we are ourselves enthusiastic. We would much prefer the Referendum solution, but we would give the right of reference, not to the present House of Lords, but to a House of Lords reformed on the lines suggested by us last week.

There is one objection to this plan, noted by our correspondent Mr. Ellison, which must be met. How can a Referendum be secured in the case where the majority of both Houses are in agreement, but where, as might very well happen, a substantial minority in the House of Commons desire a reference to the people ? In other words, how can a Referendum be secured on legislation which it is believed has not obtained the sanction of the people as a whole when the Unionists are in power and the Liberals in a minority ? We would meet this difficulty by a provision for Referendum on petition, such as.prevails in Switzerland. If any body of Members of the Lower House numbering more than one-third of the total number of the House of Commons were to demand that before it comes into operation a new Bill should be referred to a poll of the people, such poll should take place automatically. But though it is interesting enough to pursue such speculations, and though we believe that the plan we have propounded would effect a distinct improve- ment in the Constitution, we are bound to say that we do not believe that it is likely to be adopted,—at any rate for the present. 'What is far more probable is, as we have suggested above, that the Liberals, alarmed at the notion of organic reforms, will reject all such proposals iu toto, and that the most they will do will be to enter upon a discussion of internal reform of the House of Lords which will end in nothing.