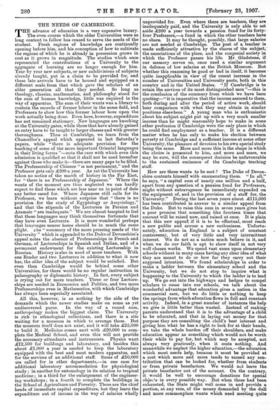 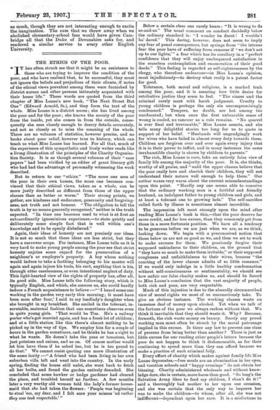 THE NEEDS OF CAMBRIDGE.

THE advance of education is a very expensive luxury. The even course which the older Universities were so long content to follow has ceased to serve the needs of the student. Fresh regions of knowledge are continually opening before him, and his conception of how to cultivate the regions of which he is already in possession grows in cost as it grows in magnitude. The studies which once represented the contributions of a University to the aggregate of learning are no longer enough for him. Year by year new subjects, or new subdivisions of subjects. already taught, put in a claim to be provided for, and these late arrivals have to be housed and equipped on a different scale from that which gave the scholars of an older generation all that they needed. So long as theology, classics, mathematics, and philosophy stood for the sum of human knowledge, little was required in the way of apparatus. The sum of their wants was a library to contain the records of former labour in the same field, and Professors to show how this former labour bore upon the work actually being done. Even here, however, expenditure has not remained stationary. New languages are knocking at the University gates, while those that have already gained an entry have to be taught to larger classes and with greater thoroughness. Thus at Cambridge, we learn from the Chancellor's appeal which appeared in last Saturday's papers, while "there is adequate provision for the teaching of some of the more important Oriental languages in their living forms "—note the care with which even this admission is qualified so that it shall not be used hereafter against those who make it—there are many gaps to be filled. The Professorship of Chinese " is not permanent," and the Professor gets only £200 a year. As yet the University has taken no notice of the march of history in the Far East, for " there is no Professorship of Japanese." Where the wants of the moment are thus neglected we can hardly expect to find those which are less near us in point of date any better cared for. Where Japanese still calls for its Professor, we learn without surprise that " there is no provision for the study of Egyptology or Assyriology," and that the stipends of the Lecturers in Persian and Aramaic " are inadequate." We are almost tempted to feel that these languages may think themselves fortunate that they have even Lecturers. It is more wonderful perhaps that languages nearer home should be in much the same plight. The " summary of the more pressing needs of the University " which is appended to the Duke of Devonshire's appeal notes the absence of Professorships in French and German, of Lectureships in Spanish and Italian, and of a permanent endowment for the existing Lectureship in Russian. History is also in need of more teachers. With one Reader and two Lecturers in addition to what it now has, the older idea of the subject would be satisfied. But even then Cambridge would be behind some other Universities, for there would be no regular instruction in palaeography or diplomatic history. In fact, every subject is crying out for more teachers. Three or four Lecture- ships are needed in Economics and Politics, and two more Professorships even in Mathematics, with which Cambridge has always been especially associated.

All this, however, is as nothing by the side of the demands which the newer studies make on some as yet undiscovered purse. In the way of a round sum, anthropology makes the biggest claim. The University is rich in ethnological collections, and there is a site waiting for a museum in which to arrange them. But the museum itself does not exist, and it will take £25,000 to build it. Medicine comes next with £20,000 to com- plete the Medical School, and even this will not provide the necessary attendants and instruments. Physics want £12,500 for buildings and laboratory, and besides this about £1,000 a year is needed to keep the laboratory equipped with the best and most modern apparatus, and for the services of an additional staff. Sums of £10,000 are called for in other departments,—in one case for additional laboratory accommodation for physiological study ; in another for entomology in its relation to tropical medicine ; in a third for the enlargement of the engineer- ing workshops ; in a fourth to complete the buildings in the School of Agriculture and Forestry. These are the chief heads of immediate capital expenditure, but they leave the expenditure out of income in the way of salaries wholly

unprovided for. Even where there are teachers, they are inadequately paid, and the University is only able to set aside £200 a year towards a pension fund for its forty= four Professors,—a fund in which the other teachers have no share; It may be thought, possibly, that large salaries are not needed at Cambridge; The post of a teacher is made sufficiently attractive by the charm of the subject," the associations of the place, and the congenial society in which the Professor passes his life. Mr. Gladstone, if our memory serves us, once used a similar argument in defence of low salaries at the British Museum. But whether, this reasoning be good or bad in itself, it becomes quite inapplicable in view of the recent increase in the number of Universities and University posts, both in this country and in the United States. " If Cambridge is to retain the services of its most distinguished men "—this is the conclusion of the summary from which we have been quoting—" it is imperative that the income assured to them, both during and after the period of active work, should bear comparison with what they may obtain in similar positions elsewhere." A young man who is enthusiastic about his subject might put up with a very much smaller income than he might reasonably hope to make in some other profession if Cambridge were the only place in which he could find employment as a teacher. It is a different matter when he has only to make his election between poverty at Cambridge and a sufficient income at some other University, the pleasure of devotion to his own special study being the same. More and more this is the shape in which the choice is presented to him, and more and more, we may be sure, will the consequent decision be unfavourable to the sustained eminence of the Cambridge teaching staff.

How are these wants to be met ? The Duke of Devon- shire contents himself with enumerating them. " In all," he says, " a capital sum of nearly one million and a, half, apart from any question of a pension fund for Professors, might without extravagance be immediately expended on the equipment of, and in the provision of a staff for, the University." During the last seven years about £115,000 has been contributed in answer to a similar appeal from the Duke. But to raise this sum in seven years gives but a poor promise that something like fourteen times that amount will be raised now, and raised at once. It is plain that this new appeal', if it is to be effectual, must reach a new public and arouse a new enthusiasm. Unfortu- nately, education in England is a subject of constant controversy, but of very little and very intermittent interest. We do not as a nation much believe in it, and when we do our faith is apt to show itself in not very well chosen works. We spend vast sums upon elementary schools without in many cases having any clear idea of what they are meant to do or how far they carry out their supposed intention. We found scholarships in order to make a ladder between the elementary school and the University, but we do not stop to inquire what is happening to the University to which the ladder is to lead up. We go out into the highways and hedges to compel Scholars to come into our schools, we talk about the wonderful advantage that education gives a nation in the commercial race, but we do little or nothing to keep the springs from which education flows in full and constant activity. Indeed, in a great number of instances the help we give is little better than wasted. Instead of making parents understand that it is to the advantage of a child to be educated, and that in laying out money for that purpose they are consulting the child's best interest and giving him what he has a right to look for at their hands, we take the whole burden off their shoulders, and make education appear as something which would not be worth their while to pay for, but which may be accepted, not always very graciously, when it costs nothing. And meanwhile we neglect the higher education,—the education which most needs help, because it must be provided at a cost which more and more tends to exceed any con- tribution that can be looked for, whether from students or from private benefactors. W'e would nut leave the private benefactor out of the account. On the contrary, it would be well to encourage donations for special objects in every possible way. But when these had been exhausted, the State might well come in and provide a portion, at any rate, of the money demanded by the dull and more commonplace wants which need meeting quite as much, though they are not interesting enough to excite the imagination. The sum that we threw away when we abolished elementary-school fees would have given Cam- bridge all that the Duke of Devonshire asks for, and rendered a similar service to every other English University.