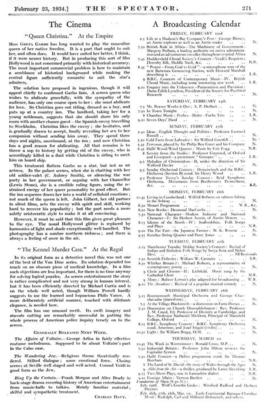 "Queen Christina." At the Empire

MISS GRETA GARBO has long wanted to play the masculine queen of her native Sweden. It is a part that ought to suit her, and often does. It would have suited her better, I think, if it were nearer history. But in producing this sort of film Hollywood is not concerned primarily with historical accuracy. The most important commercial problem is how to maintain a semblance of hiStorical background while making the central figure sufficiently romantic to suit the star's admirers..

The solution here proposed in ingenious, though it will appeal chiefly to confirmed Garbo fans. A screen queen who wishes to abdicate gracefully, with the sympathy of the audience, has only one course open to her : she must abdicate for love. So ,Christina goes out riding, dressed as a boy, and puts up at a country inn. The landlord, taking her for a young nobleman, suggests that she should share his only room with another chance guest-the Spanish envoy travelling to Stockholm. Christina likes the envoy ; she hesitates, and is gradually drawn to accept, finally revealing her sex to her companion without sending him away. They spend three days and nights, snowbound, at the inn ; and now Christina has a good reason for abdicating. All that remains is to throw a sop to history by getting rid of the envoy, who is accordingly killed in a duel while Christina is riding to meet him on board ship.

This treatment flatters Garbo as a star, but not as an actress. In the palace scenes, when she is chatting with her old soldier-valet (C. Aubrey Smith), or silencing the war party in her government, or arguing with her Chancellor (Lewis Stone), she is a credible ruling figure, using the re- strained energy of her queer personality to good effect. But the inn sequence draws her into a world of celluloid emotions ; not much of the queen is left. John Gilbert, her old partner in silent films, acts the envoy with spirit and skill, working hard to recover his popularity ; but the part needs a more subtly aristocratic style to make it at all convincing.

However, it must be said that this film gives great pleasure to the eye. The usual Hollywood glitter is replaced by harmonies of light and shade exceptionally well handled. The photography has a sombre northern -richness ; and there is always a feeling of snow in the air.