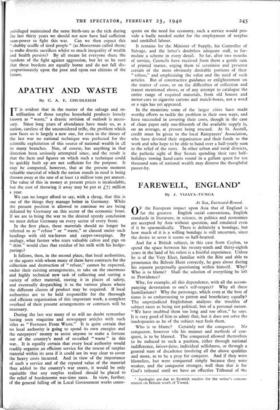 TT is evident that in the matter of the salvage and re- ". utilisation of those surplus household products loosely known as " waste," a drastic revision of outlook is neces- sary. Since long years of abundance have made us, as a nation, careless of the unconsidered trifle, the problem which now faces us is largely a new one, for even in the throes of the last war no national technique was perfected for the scientific exploitation of this source of national wealth in all its many branches. Nor, of course, has anything in that direction been seriously attempted since, and the result is that the facts and figures on which such a technique could be quickly built up are not sufficient for the purpose. It may be computed, however, that at the present moment valuable material of which the nation stands in need is being thrown away at the rate of at least 12 million tons per annum. The value of this in money at present prices is incalculable, but the cost of throwing it away may be put at L72 million a year.

We can no longer afford to say, with a shrug, that this is one of the things they manage better in Germany. While the present position is allowed to continue we are being defeated by Germany on this sector of the economic front. If we are to bring the war to the desired speedy conclusion we must defeat Germany on every sector of every front.

In the first place, these materials should no longer be referred to as " refuse " or " waste," or classed under such headings with old tea-leaves and carpet-sweepings. By analogy, what farmer who rears valuable calves and pigs on " skim " would class that residue of his milk with his hedge- parings?

It follows, then, in the second place, that local authorities, or the agents with whom many of them have contracts for the collection and destruction of " refuse," cannot be expected, under their existing arrangements, to take on the enormous and highly technical new task of collecting and sorting a variety of other material, storing it in places of safety, and eventually despatching it to the various places where the different classes of product may be required. If local authorities are to be held responsible for the thorough and efficient organisation of this important work, a complete overhaul of their present arrangements or contracts will be necessary.

During the last war many of us will no doubt remember having seen magazine and newspaper articles with such titles as " Fortunes From Waste." It is quite certain that no local authority is going to spend its own energies and the ratepayers' money to assist anyone to make a fortune out of the country's need of so-called " waste " in this war., It is equally certain that every local authority would readily organise an efficient service for the rescue of surplus material within its area if it could see its way clear to cover the heavy costs incurred. And in view of the importance of such a service and of the reputed value of the material thus added to the country's war stores, it would be only equitable that any surplus realised should be placed to the relief of burdensome war-time rates. In view, further, of the general falling off in Local Government works conse- quent on the need for economy, such a service would pro- vide a badly needed outlet for the employment of surplus and unskilled labour.

It remains for the Minister of Supply, his Controller of Salvage, and the latter's doubtless adequate staff, to for- mulate a scheme in every detail. So far, after two months of service, Councils have received from them a gentle rain of printed matter, urging them to scrutinise and preserve certain of the more obviously desirable portions of their " refuse," and emphasising the value and the need of such articles. But of constructive guidance or enlightenment on the matter of costs, or on the difficulties of collection and transit mentioned above, or of any attempt to catalogue the entire range of required materials, from old houses and motor-cars to cigarette cartons and match-boxes, not a word or a sign has yet appeared.

In the meantime some of the larger cities have made worthy efforts to tackle the problem in their own ways, and have succeeded in covering their costs, though in the case of clean paper only one-fifteenth of the available supply is, on an average, at present being rescued. At St. Austell, credit must be given to the local Ratepayers' Association, who have devoted their organisation and their funds to the work and who hope to be able to hand over a half-yearly sum to the relief of the rates. In other urban and rural districts, the pathetic sight of Boy Scouts spending their rare half- holidays towing hand-carts round in a gallant quest for ten thousand tons of national wealth may distress the thoughtful passer-by.