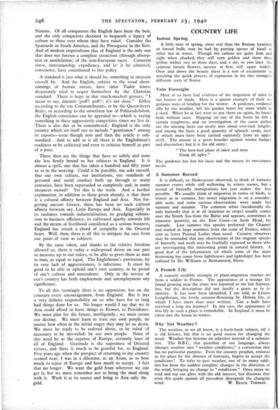 Page 14, 23 February 1940 — A Summer Record It is difficult, as Shakespeare observed, to
Close

A Summer Record It is difficult, as Shakespeare observed, to

think of fantastic summer events while still wallowing in winter snows, but a record of butterfly immigrations last year makes the feat possible. We usually think of migration in terms of birds, in winter as in summer, but insect migration is on a consider- able scale, and some curious observations were made last summer and autumn. The common white (incidentally the only butterfly that is at all injurious to crops) usually comes over the North Sea from the Baltic and appears, sometimes in immense quantity, on the East Coast—at Scolt Head, for example. Last summer this species preferred the Channel and started in large numbers from the coast of France, which sent us fewer Painted Ladies than usual. Country observers may be reminded that any observations of the migrant species of butterfly and moth may be fruitfully reported to those who are investigating this interesting point in natural history. A good deal of the information (of which some of the most interesting has come from lighthouses and, lightships) has been collated by Dr. Williams at Rothamsted, Herts.