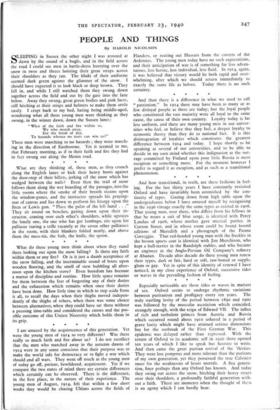 And how transitional, in truth, are these fashions in feel-

ing. For the last thirty years I have constantly revisited Oxford and have invariably been astonished by the con- tinuity of types. Gazing down from high table upon the undergraduates below I have amused myself by recognising in the 1936 vintage exactly the same types as existed in 1906. That young man, over there, who differs from his fellows in that he wears a suit of blue serge, is identical with Percy Landau of 1906, whose mother gave musical parties in Curzon Street, and in whose room could be found bound editions of Meredith and a photograph of the Parma Correggio. That red-headed young man with the freckles in the brown sports coat is identical with Jim Murchison, who kept a bull-terrier in the Randolph stables, and who became an engineer in the Anglo-Persian Oil Company's refinery at Abadan. Decade after decade do these young men renew their types, dark or fair, hard or soft, raw-boned or supple, glum or gay. Yet in spite of this identity of renewal I have noticed, in my close experience of Oxford, successive tides or waves in the prevailing fashion of feeling.