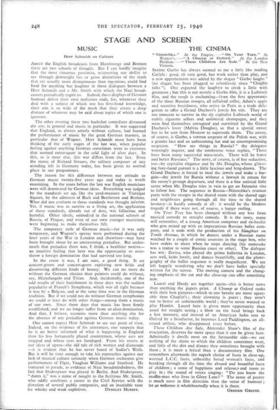 Ninotchka." At the Empire. " On Your Toes." At Warner's.—" A Chump at Oxford." At the London Pavilion.—" These Children Are Safe." At the New Victoria.

SEEING Garbo has always seemed to me a little like reading

Carlyle: good, oh very good, but work rather than play, and a new apprehension was added by the slogan " Garbo laughs " (no slogan has been plugged so relentlessly since " Chaplin

talks "). One expected the laughter to creak a .little with greatness ; but this is not merely a Garbo film, it is a Lubitsch film, and the result is enchanting—from the first appearance of the three Russian stooges, all celluloid collar, Adam's apple and secretive boyishness, who arrive in Paris as a trade dele- gation to offer a Grand Duchess's jewels for sale. They are too innocent to survive in the sly capitalist Lubitsch world of nubile cigarette sellers and unlimited champagne, and they

soon find themselves corrupted and outwitted by the Grand Duchess's lover (Melvin Douglas), so that a special envoy has to be sent from Moscow to supersede them. The envoy, of course, is Garbo, a veteran sergeant of the Polish war, with a granite face and an unbecoming hat and an uncompromising suspicion. "How are things in Russia? " the delegates winningly inquire, and the tombstone voice replies, " There have been many successful mass-trials. There will be fewer and better Russians." The story, of course, is of her seduction, too—by capitalist elegance and by Mr. Douglas, whose glitter- ing foxy-faced pursuit is a little luscious and long-drawn. The Grand Duchess is forced to steal the jewels and make a bar- gain—the jewels for Russia without a lawsuit in return for the envoy's prompt departure, and there is a fine satirical little scene when Mi. Douglas tries in vain to get an Intourist visa to follow her. The sequence in Russia—Ninotchka's reunion party with the stooges in the shared room with the shared eggs and neighbours going through all the time to the shared lavatory—is hardly comedy at all: it would be the bleakest tragedy if there were not, of course, a happy ending.

On Your Toes has been changed without any loss from

musical comedy to straight comedy. It is the story, many will remember, of a young American composer and ex-hoofer

who gets mixed up with an impecunious Russian ballet com- pany, and it ends with the production of his Slaughter on Tenth Avenue, in which he dances under a Russian name watched by a couple of comic assassins in the stage box, who

have orders to shoot when he stops dancing (his namesake was a traitor to some Russian cause or other). The dialogue has wit: Zorina, who played the prima ballerina in London, acts well, looks lovely, and dances beautifully, and the photo- graphy of the ballet sequence is really magnificent. We are left happily wondering why we don't have ballet specially written for the screen. The moving camera and the chang- ing emphasis of the cut and the close-up can offer something new.

Laurel and Hardy are together again—this is better news

than anything the papers print. A Chump at Oxford ranks with their best pictures—which to one heretic are more agree- able than Chaplin's ; their clowning is purer ; they aren't out to better an unbetterable world ; they've never wanted to

play Hamlet. Laurel here is given more opportunity than usual for straight acting ; a blow on the head brings back a lost memory, and instead of an American hobo sent to Oxford by a benefactor, he becomes Lord Paddington, an all- round athlete, who disappeared years before.

These Children Are Safe, Alexander Shaw's film of the evacuation, deserves far more space than it can be given here.

Admittedly it dwells most on the favourable side—we see nothing of the slums to which the children sometimes went, and little of the dirt and disease they sometimes brought with them ; it is more a lyrical than a documentary film. One remembers afterwards the superb choice of faces in close-up, worried L.C.C. faces, unhealthy bored women's faces, and breaking through all the time the absurd and beautiful faces of children ; a sense of happiness and release,* and room to play in ; the sound of voices singing: " Do you know the muffin-man who lives in Glory Lane? " The sense of poetry is much rarer in film direction than the sense of humour ; let us welcome it wholeheartedly when it is there.