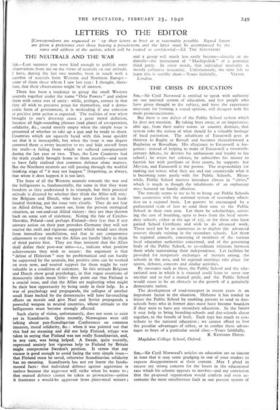 SIR,—Sir Cyril Norwood is entitled to speak with authority on our national system of education, and few people who have given thought to the subject, and have the experience necessary for forming a sound opinion, will disagree with his main pronouncements.

But there is one defect of the Public School system which he does not mention. By taking boys away, at an impression- able age, from their native towns or country districts, that system robs the nation of what should be a valuable heritage of local patriotism. The inhabitant of Eatanswill goes at thirteen to Rugby or Rossall and becomes thenceforward a Rugbeian or Rossallian. His allegiance to Eatanswill is for- gotten: instead of helping to make of Eatanswill a twentieth- century Athens, he devotes his enthusiasm and loyalty to his school ; he wears her colours, he subscribes his money to furnish her with pavilions or fives courts, he supports her Mission, and Eatanswill is the poorer. The responsibility for making our towns what they are and our countryside what it is becoming rests partly with the Public Schools. Mean- while, Public School masters introduce classes in " civics," which is much as though the inhabitants of an orphanage were. lectured on family affection.

The remedy seems to me to be to bring our Public Schools into connexion with the national system of secondary educa- tion on a regional basis. Let parents be encouraged by a preferential scale of fees to send their sons to the Public School in their own area. Let there be scholarships, cover- ing the cost of boarding, open to boys from the local secon- dary schools, either at the age of 131,, or for those who have gained School Certificate and wish to do advanced work. These need not be so numerous as to deplete the advanced courses already existing in the secondary schools. Let there be regional councils, consisting of members of the various local education authorities concerned, and of the governing body of the Public School, to co-ordinate relations between them while maintaining their independence. Let facilities be provided for temporary exchanges of masters among the schools in the area, and let regional meetings take place for sports, debates, concerts and similar activities.

By measures such as these, the Public School and the edu- cational area in which it is situated could learn to serve one another and to feel a mutual pride, and the Public School would cease to be an obstacle to the growth of a genuinely democratic nation.

The development of road-transport in recent years is an important factor in the situation. Hitherto it has tended to injure the Public School by enabling parents to send to day- schools boys who in former days must have become boarders if they were to have any secondary education. In the future it may help to bring boarding-schools and day-schools closer together, to the benefit of both. Each type has much to con- tribute to the national education ; we cannot afford to lose the peculiar advantages of either, or to confine these advan- tages to boys of a particular social class.—Yours faithfully, R. KENNARD DAVIS.