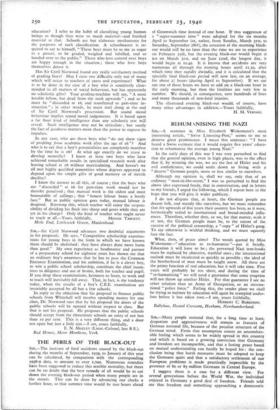 Sin, —A sentence in Miss Elizabeth Wiskemann's most interesting article, " Swiss Listening-Post," seems to me to deserve great prominence. I mean this sentence: " I have heard a Swiss estimate that it would require five years' educa- tion to rehumanise the average young Nazi."

In the early days of this war I was very perturbed to find that the general opinion, even in high places, was to the effect that if, by winning the war, we see the last of Hitler and his evil confederates, we could settle down to living with a " decent " German people, more or less similar to ourselves.

Although my opinion is, shall we say, only that of an ordinary " man-in-the-street," I was so perturbed to find the above idea expressed freely, that in conversation, and in letters to my friends, I urged the following, which I repeat here in the hope that you will give it wider publicity.

I do not dispute that, at heart, the German people are decent folk, and mainly like ourselves, but we must remember that for upwards of five years their country has been, as it were, hermetically sealed to international and broad-minded influ- ences. Therefore, whether they, or we, for that matter, wish it or not, the German people must be, to the extent of the success of the political censorship, a " copy " of Hitler's gang. To say otherwise is wishful thinking, and we must squarely face the fact.

What, then, of peace aims? The words quoted by Miss Wiskemann—" education to re-humanise "—put it briefly. Education it will have to be ; the perverted Nazi text-books must be replaced by objective, truthful ones ; the international outlook must be inculcated as quickly as possible ; the ideal of the brotherhood of man must be taught anew. All these are the prime function of real education, but it will take time. Five years will probably be too short, and during the time of " re-humanising " we will need a guarantee that some eruption will not throw up another Hitler. For that guarantee I see no other solution than an Army of Occupation, or an interna- tional " police force." Failing this, the tender plant we shall be trying to nature by education will again be trampled under- foot before it has taken root.—I am, yours faithfully,