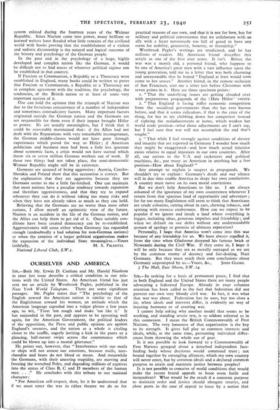 SIR,—Both Mr. Erwin D. Canham and Mr. Harold Nicolson in your last issue describe a critical condition in our rela- tions with the United States. An American friend has just sent me an article by Westbrook Pegler, published in the New York World Telegram. There are some significant passages. Mr. Pegler states that " The psychology of the English toward the American nation is similar to that of the Englishman toward his women, an attitude which the American language capsuled into a vulgar phrase a few years ago, to wit, ' Treat 'em rough and make 'em like it.' It has succeeded in the past, and appears to be operating well again, for the American Government, the political leaders of the opposition, the Press and public opinion are against England's enemies, and the nation as a whole is circling closer to the scuffle, eagerly inviting a kick in the pants or a glancing, half-meant swipe across the countenance which could be blown up into a mortal grievance."

He points out, however, that " Interference with our mails or ships will not arouse our emotions, because mails, mer- chandise and boats do not bleed or moan. And meanwhile the Germans, with their unerring stupidity, are starving and freezing the wretched Poles, and degrading millions of captives into the status of Class B, C and D members of the human race. . . ." He concludes with this tribute to our national character : " For American self-respect, then, let it be understood that if we must enter the war in either theatre we do so for practical reasons of our own, and that it is not for love, but for military and political convenience that we collaborate with an ally with a heart notoriously too full of greed to have any room for nobility, generosity, honesty, or friendship."

Westbrook Pegler's writings are syndicated, and he has millions of readers. My American friend describes this article as one of the first sour notes. It isn't. Before the war was a month old, a personal friend, who happens to be one of America's great men with a vast influence upon the young generation, told me in a letter that was both charming and unreasonable that he hoped " England at least would soon come to her senses." Another friend, in the remote seclusion of San Francisco, sent me a letter just before Christmas with seven points in it. Here are three specimen points : t. " That the underlying issues are getting clouded over with preposterous propaganda of the : Hate Hitler' variety.

2. " That England is facing stiffer economic competition from the socialised governments than she has ever known before, and that it seems ridiculous, if that is the crux of the thing, for her to try clubbing down her competitor instead of righting the maladjustments at home, which weaken her world trade position—what those adjustments are I can't say, but I feel sure that war will not accomplish the end that's sought."

3. " That while I feel strongly against conditions of slavery and insanity that are reported in Germany I wonder how much they might be exaggerated—and how much actual injustice exists relative to equal injustices in our own countries. After all, our unions in the U.S. and racketeers and political machines, &c., put many an American in anything but a free position—How about England? "

Any attempt to explain is suspect as propaganda. We shouldn't try to explain : Germany's deeds and our silence will in due time enable America to shape her own conclusions. A country must move on its own moral convictions.

But we don't help Americans to like us. I am always ashamed of the ignorance of my own countrymen whenever I return from that spacious land of opportunity and adventure ; for far too many Englishmen still seem to think that Americans are crude colonists, cutting about in cars, chewing tobacco, and spitting with rococco exuberance. How can we expect to be popular if we ignore and insult a land where everything is bigger, including ideas, generous impulses and friendship ; and when we default on our debts without any understandable gesture of apology or promise of ultimate reparation?

Personally, I hope that America won't come into this war because of any friendship for us. We have always repelled it, from the time when Gladstone dropped his famous brick at Newcastle during the Civil War. If they come in, I hope it will be only because they are as morally outraged as we are by the common enemy of decency and fair-dealing, Nazi Germany. But they must reach their own conclusions about