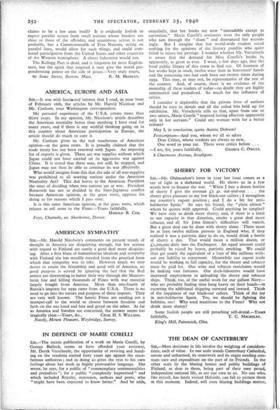 Sit,—It was with fascinated interest that I read, in your issue of February r6th, the articles by Mr. Harold Nicolson and Mr. Canham, your Washington correspondent.

My personal experience of the U.S.A. covers more than thirty years. In my opinion, Mr. Nicolson's article describes the American mentality better than anything I have read for many years, and if there is any wishful thinking going on in this country about American participation in Europe, the article should do much to cure it.

Mr. Canham gives us the real touchstone of American opinion—at the grass roots. It is proudly claimed that the trade treaty has not been renewed with Japan. An imposing list of exports is given. These are war supplies without which Japan could not have carried on its aggressive war against China. It is stated that these may, not will, be stopped, and Japan may not then be able to continue its war effectively.

Who would imagine from this that the sale of all war-supplies was prohibited to all warring nations under the American Neutrality Act? This Act leaves to the American President the onus of deciding when two nations are at war. President Roosevelt has not so decided in the Sino-Japanese conflict because American opinion, at the grass roots, opposes his doing so for reasons which I pass over.

It is this same American opinion, at the grass roots, which refuses to sell arms to the Finns.—Yours faithfully,