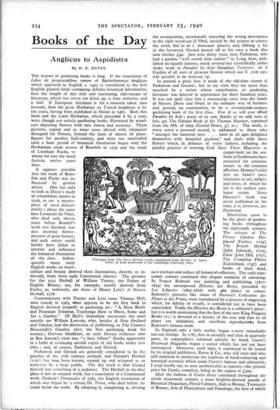 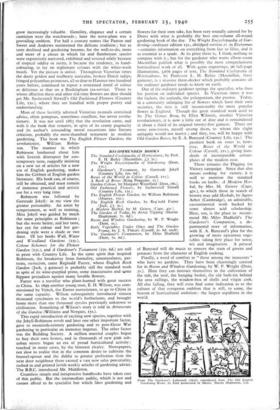 By H. E. BATES Contemporary with Turner and Lyte came Thomas Hyll, who issued, in 1563, what appears to be the first book in English devoted properly to gardening art : " A Most Briefe and Pleasaunt Treatyse, Teachynge How to Dress, Sowe and Set a Garden." Of Hyll's immediate successors the most notable are William Lawson, who, besides A New Orchard and Garden, had the distinction of publishing, in The Country Housewife's Garden, 1617, the first gardening book for women ; Gervase Markham, an early literary racketeer who in Ben Jonson's view was " a base fellow," thanks apparently to a habit of re-issuing unsold copies of old books under new titles ; and, of course, Parkinson and Gerard.

Parkinson and Gerard are generally considered to be the peaches of the 17th century orchard, and Gerard's Herball (1597) has long been known, sopped up and accepted as an authority by a large public. The dry truth is that Gerard himself was something of a racketeer. The Herball in the first place is not an original work, but a translation of a Continental work, Dodoen's Pemptades of 1583, the English translation of which was begun by a certain Dr. Priest, who died before he could finish the work. By adopting it, completing it, altering the arrangement, occasionally marrying the wrong description to the right wood-cut (L'Obel, invited by the printer to correct the work, did so in a thousand places), and, fibbing a bit in the foreword, Gerard passed off as his own a book that now fetches £40. Just over thirty years later Parkinson, who had a garden " well stored with rarities " in Long Acre, pub- lished an equally famous, much revered but scientifically rather shaky work in Paradisi In Sole\ Paradisus Terrestis: or A Garden of all sorts of pleasant flowers which our E. zlish ayre will permitt to be houssed vp.

In general a great fuss is made of the old-time charm of Parkinson and Gerard ; but in my view they are more than matched by a writer whose contribution to gardening literature was delayed in appearance for three hundred years. It was not until 1932 that a manuscript came into the hands of Messrs. Davis and Orioli in the ordinary way of business and proved, on examination, to be a seventeenth-century gardening book of the first class. Few of us will ever afford Paradisi In Sole ; many of us can, thanks to an odd turn of fate, get The Garden Book of Sir Thomas Hanmer, reprinted from the MS. of 1659 (Gerald Howe, £i is.). The work, in every sense a personal record, is addressed to those who " amongst the innocent ones . . . have in all ages delighted themselves with beautiful gardens," and deals with those flowers which, in defiance of every fashion, including the painful practice of weaving God Save Their Majesties in carpet-beds on the sea- front at Eastbourne,have remained for centuries secure in the common affection. Hanmer's chief joys are beare's eares (auriculas to us), tulipes, and irises, of which his list is the earliest cata- logue extant. Since Hanmer's book was never published in his time, it is, however, un- illustrated.

Title-page from The Crete Herbal: (1526), reproduced from Herbals, by Agnes Arber, by kind permission of the Cambridge University Press.

In England, only a little earlier, began a most remarkable not-out innings. In 1787, first in monthly and then in quarterly parts, its copperplates coloured entirely by hand, Curtis's Botanical Magazine began a career which has not yet been interrupted. Moreover, until 1920, it continued to be issued by its original publishers, Reeve & Co., who still exist and who still maintain to perfection the tradition of hand-colouring and botanical accuracy which made Curtis's famous and ultimately, I need hardly say, as near unobtainable as matters—the present price for Curtis, complete, being in the region of £3oo.

After the fashion of Curtis there continued throughout the whole nineteenth century a most brightly-dressed parade of Botanical Magazines, Floral Cabinets, Aids to Botany, TreaSuries of Botany, Arts of Floriculture and Pomology, the best of which

grow increasingly valuable. Gentility, elegance and a certain exoticism were the watchwords ; later the stove-plant was a prevailing emblem. For half a century names like Paxton and Sweet and Andrews maintained the delicate tradition ; but as taste declined and gardening became, for the well-to-do, more and more of a circus in which fat and flamboyant species were expensively nurtured, exhibited and revered solely because of tropical oddity or rarity, it became the tendency, in hand- colouring, to lay on nightmare colours with the white-wash brush. Yet the picture is unfair. Throughout Victorian times the dusty golden and mulberry auriculas, broken Dutch tulips, fringed polyanthus primroses, all so dear to Hanmer two hundred years before, continued to repeat a restrained motif of colour as delicious as that on a Rockingham tea-service. Those to whose affection these and other old-time flowers are dear should get Mr. Sacheverell Sitwell's Old Fashioned Flowers (Country Life, 15s.), where they are handled with proper poetry and understanding.

Robinson was followed by Gertrude Jekyll : in my view the a. eater personality. An artist by temperament, as well as training, Miss Jekyll was guided by much the same principles as Robinson ; but she wrote better, and her taste, her eye for colour and her gar- dening style were a shade or two finer. Of her books Wall, Water and Woodland Gardens (15s.), Colour Schemes for the Flower

Garden (15s.), and A Gardener's Testament (ups. 6d.) are still in print with Country Life. In the same spirit that inspired Robinson, the breakaway from formality, unnaturalness, pat- terns, exoticism, came Reginald Farrer, whose English Rock Garden (Jack, 3 guineas) is probably still the standard work in spite of its wine-purpled prose, some inaccuracies and spme flippant prejudices against many lovable flowers.

Farrer was a traveller who plant-hunted with great success in China. In 1899 another young man, E. H. Wilson, was com- missioned by Veitch, the Exeter nurseryman, to go to China in the same capacity. Wilson subsequently introduced sixteen thousand specimens to the world's herbariums, and brought home more than one thousand species previously unknown to civilisation. Something of Wilson's story is told in Aristocrats of the Garden (Williams and Norgate, 15s.).

This rapid introduction of exciting new species, together with the Jekyll-Robinson revolt and later one other important factor, gave to twentieth-century gardening and to post-Great War gardening in particular an immense impetus. The other factor was the Building SoCiety. A million married couples began to buy their own homes, and in thousands of new pink sub- urban streets began an era of proud horticultural activity : touched in many cases, by the bitterest rivalry. Newspapers, not slow to realise that in the common desire to cultivate the brussel-sprout and the dahlia to greater perfection than the next door neighbour there existed a vast new sales potentiality, Cashed in and printed lavish weekly articles of gardening advice. The B.B.C. introduced Mr. Middleton.

Countless simple and inexpensive handbooks have taken care of this public. But the intermediate public, which is not and cannot afford to be specialist but which likes gardening and

flowers for their own sake, has been very soundly catered for by Dents with what is probably the best one-volume all-round gardening book of the day. The Wright Encyclopaedia of Gar- dening—ordinary edition 15s., abridged version 2s. in Everyman —contains information on everything from lice to lilies, and is as essential as a spade. At its price there is, I think, nothing to compete with it ; but for the gardener who wants elbow-room Macmillan publish what is possibly the most comprehensive horticultural work of all. With 4,000 engravings, 96 full-page illustrations, 3,676 pages of text, The Standard Cyclopedia of Horticulture, by Professor L. H. Bailey (Macmillan, three guineas), is a massive three-decker which probably contains all the ordinary gardener needs to know on earth.

Out of the ordinary gardener springs the specialist, who fixes his passion on individual species. In Victorian times it was the fuchsia, the auricula, the pelargonium, the picotee. Today, in a constantly enlarging list of flowers which have their own societies, the rose is still incontestably the most popular flower in England. Though the great standard work used to be The Genus Rosa, by Ellen Wilmott, another Victorian revolutionary, it is now a little out of date and is remaindered at about a third of its original twenty-five guineas. There are some rose-lovers, myself among them, to whom this slight antiquity would not matter ; and they, too, will be happy with Old Garden Roses, by E. A. Bunyard (Country Life, 15s.). The prettiest book on roses is, how- ever, Roses of the World in Colour (Cassell, 21s.), giving hun- dreds of incomparable colour- plates of the modern rose.

Early Vegetables Under Glass and The Garden

Finally, a word of comfort to " those among the innocents " who have no gardens. They have been charmingly catered for in Room and Window Gardening, by W. P. Wright (Dent, 5s.). Here they can instruct themselves in the cultivation of the tub, the roof, the hanging basket, the old bath-tin behind the area railings, the window-box of shells and virgin cork. All else failing, they will even find some indication as to the culture of that evergreen emblem that is still, to some, the heaven of horticultural ambition : the largest aspidistra in the world.

From The Gardener's Labyrinth 0650, reproduced from The Old English Gardening Books, by kind permission of Messrs. Martin Hopkinson, Ltd.