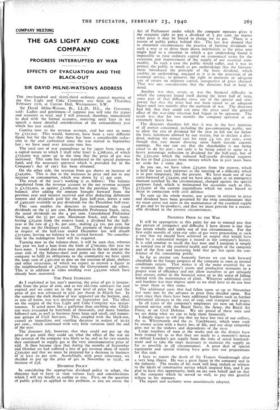 THE GAS LIGHT AND COKE COMPANY

THE two-hundred and thirty-third ordinary general meeting of the Gas Light and Coke Company was held on Thursday, February 15th, at Caxton Hall, Westminster, S.W.

Sir David Milne-Watson, Br., LL.D., D.L., the Governor, said: Ladies and gentlemen—I suppose you will take the report and accounts as read, and I will proceed, therefore, immediately to deal with the formal accounts, reserving until later in my speech a more detailed consideration of the extraordinary year which has just ended.

Coming now to the revenue account, coal has cost us more by £131,000. This would, however, have been a very different figure but for the fact that there has been a considerable reduc- tion in the coal carbonised since the war started in September last ; we have used over 200,000 tons less.

The total cost of war expenditure so far (apart from items of a capital nature to which I shall refer later) is £268,00o, of which £153,000 was spent up to the time that the price of gas was increased. This sum has been transferred to the special purposes fund, and the necessary approval which is provided for in the Company's Act of 1911 has been obtained.

On the other side, the revenue from gas shows an increase of £145,000. This is due to the increases in price and not to any increase in consumption, which was down by 51 per cent.

The result of the year's working is as follows: The balance transferred from the revenue account to the net revenue account is £1,725,000, as against £2,066,000 for the previous year. This balance. after adding the amount brought forward from the previous year and interest received and after deducting debenture interest and dividends paid for the June half-year, leaves a sum of £492,000 available to pay dividends for the December half-year.

This sum enables the directors to recommend the usual dividends on the 31 per cent. Redeemable Preference Stock, 1970, the usual dividends on the 4 per cent. Consolidated Preference Stock, and the 31 per cent. Maximum Stock, and, after trans- ferring £25,000 from the reserve fund, a dividend for the half- year at the rate of £3 8s. per cent., making £4 Jos. per cent. for the year, on the Ordinary stock. The payment of these dividends in respect of the half-year ended December last will absorb £517,000, leaving no balance to be carried forward. No contribu- tion to the redemption fund will be required.

Turning now to the balance-sheet, it will be seen that, whereas last year we had a loan from the hank of £7oo,000, this year we have none. I would also draw your attention to the last item on the asset side of the balance-sheet and point out that to enable the company to fulfil its obligations to the community we have spent the large sum of £421,000 to date on the erection of plant, shelters and other structures, of which we expect to recover a figure in the neighbourhood of £85,000 from the Government and others. This is in addition to sums totalling over £43,0oo which have already been recovered.

As I explained at last year's meeting, the price of gas is insepar- able from the price of coal, and as our old-time contracts for coal expired and we came on to the new level of price for coal the i price of gas was advanced to 91d. per therm in March last. In the summer the dark shadow of war appeared on the horizon, and, as you all know, war was declared on September 3rd. The effect on the output of the Gas Light and Coke Company was instan- taneous. It acted more like a guillotine than anything else. Child- ren were evacuated by hundreds of thousands, and many families followed suit, as well as business firms large and small, and numer- ous groups of Civil Servants. This, coupled with the black-out, caused an immediate and startling decrease in output of 20-25 per cent., which continued with very little variation until the end of the year.

The directors felt, however, that they could not put up the price of gas until they could see what the effect of the war on the revenue of the company was likely to be, and so for two months they continued to supply gas at the very unremtmerative price of Sid. It then became clear that during the months of September and October we had suffered a loss of gas revenue alone of nearly £250,000 and that we must be prepared for a decrease in business of at least 20 per cent. Accordingly, with great reluctance, we decided to put up the price of gas in November to 121d., an increase of 21c1.

DIVIDEND POLICY In considering the appropriate dividend policy to adopt, the directors had to keeo in view various facts and considerations which I will try briefly to outline to you. First, on the question of public policy as applied to this problem, as you are aware the Act of Parliament under which the company operates gives it the statutory right to pay a dividend of 5 per cent. no matter what price it may be forced to charge for its gas. There is a reason of public policy behind this. The last war showed that in abnormal circumstances the practice of limiting dividends in such a way as to drive them down indefinitely as the price rose might lead to a situation in which a gas undertaking found it impossible to raise ordinary capital on economical terms for the extension and improvement of the supply of our essential com- modity. In such a case the public would suffer, and it was to protect the public as much as gas undertakings that the Govern- ment introduced the principle of the basic dividend, which enables an undertaking, engaged as it is in the provision of an essential service, to preserve the right to maintain an adequate rate of return on ordinary capital, irrespective of price charged. That was one consideration that the directors had to keep in mind.

Another was that, severe as was the financial difficulty in which the company found itself during the latter half of 1939, some part of that difficulty arose out of the special and tem- porary fact that the price had not been raised to an adequate figure until two months after the outbreak of war. The directors had felt that they could not raise the price until the general effect of the war-time situation had begun to be apparent. The result was that for two months the company operated at an extremely heavy loss.

The directors therefore felt that it was in the best interests of all parties concerned, including the gas-consuming public, not to allow the rate of dividend for the year to fall too far below the basic minimum allowed by our statute, but to declare a divi- dend, making the annual rate for 1939 £4 los. per cent., even though that rate meant drawing upon funds outside current earnings. No one can say that the shareholder is not being asked to do his part ; not only is he being asked to agree to a heavy percentage reduction in dividend for the half-year, but of the £325,000 which the reduced half-yearly dividend requires he has to find £232,000 from money which has in past years been set aside for a rainy day.

As you see, we have taken £25,000 from the reserve, which is held for just such purposes as the meeting of a difficulty which is in part temporary, like the present. We have made use of our carry-forward of £54,000, and we have also, again as an emergency measure justified by the circumstances, charged against the special purposes fund, which is maintained for occasions such as this, £153,000 of the current expenditure which we were forced to incur in connection with civil defence.

To sum up the whole matter, our actions in relation to price and dividend have been governed by the twin considerations that we must cover our costs in the maintenance of the essential supply of gas and its by-products, and that we must provide for a reason- able dividend in the present circumstances.

PROGRESS PRIOR TO THE WAR

It will be appropriate at this point for me to remind you that the picture of stringency and difficulty I have drawn is one that has arisen wholly and solely out of war circumstances. For the first eight months of 1939 our sales of gas were proceeding at such a rate that we should have achieved an output that would have been by a substantial margin a record in the company's history. It is cold comfort to recall the fact now and I mention it simply to remind you of the essential health and strength of the company and of the firm and increasing hold that gas has upon the con- fidence of the consuming public.

So far as anyone can humanly foresee we can look forward cheerfully to the future progress of the company as soon as normal conditions return. That makes it all the more essential for us to maintain the company's assets and productive resources in a proper state of efficiency and not allow ourselves to get seriously into arrears, either in the financial sense or in the sense of falling behind with the maintenance of plant. Whatever additional costs and burdens war may impose upon us we shall have to do our best to meet them as they come.

The additional costs that had fallen upon us up to November last were met by the advance in price then decided upon. But even since then there have been additional burdens such as further substantial advances in the cost of coal, coal transport and wages. In all 2,000 of the company's employees are now on full-time national service with the Royal Navy, the Army, the Royal Air Force, or on Civil Defence. We are proud of these men and we are doing what we can to help them financially. I deeply regret to tell you that we have lost two of our colliers, the ss. Whitemantle and the ss. Torchbearer, which were sunk by enemy action with a heavy loss of life, and our deep sympathy goes out to the widows and dependents of the men. Large numbers of men at the works and on the district have been trained by us so that they are ready to a moment's notice to defend London's gas supply from the risks of aerial bombard- ment and to take the steps necessary to maintain the supply so far as possible in all circumstances. A great deal of special equipment and special training have gone into our preparations for this task.

I have to report the death of Sir Francis Goodenough after a very long illness. He was a great figure in the company and in the industry. The results of his work will long endure as witness to the ideals of constructive service which inspired him, and I am glad to have this opportunity, both on my own behalf and on that of the company which he served so well, to pay this grateful tribute to his memory.