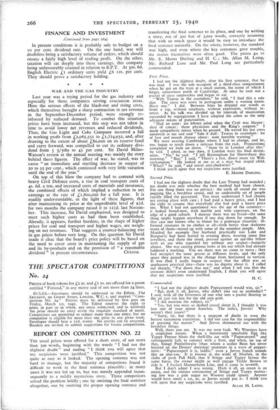 WAR AND THE GAS INDUSTRY

Last year was a trying period for the gas industry and especially for those companies serving evacuation areas. Here the serious effects of the black-out and rising costs, which themselves brought a sharp contraction in net revenue in the September-December period, were strongly re- inforced by reduced demand. To combat this situation prices have been increased, but this step was not taken in time to avoid lower net revenues and reduced dividends. Thus, the Gas Light and Coke Company incurred a fall in working profit from £2,065,551 to £1,724,932, and, after drawing to the extent of about £80,000 on its reserve fund and carry forward, was compelled to cut its ordinary divi- dend from 5 3/5ths to 44 per cent. Sir David Milne- Watson's review at the annual meeting was mainly the story behind these figures. The effect of war, he stated, was to cause " an immediate and startling decrease in output of 20 to 25 per cent., which continued with very little variation until the end of the year."

On top of this blow the company had to contend with heavy Civil Defence costs, a rise in coal transport costs of 4s. 6d. a ton, and increased costs of materials and insurance, the combined effects of which implied a reduction in net earnings at the rate of £1,800,000 for a full year. It is readily understandable, in the light of these figures, that after maintaining its price at the unprofitable level of 91d. for two months the company raised it to tzid. last Novem- ber. This increase, Sir David emphasised, was designed to meet such higher costs as had then been established. Already, it appears, further burdens, in the shape of higher prices for coal and transport and higher wages, are weigh- ing on net revenues. That suggests a counter-balancing rise in gas prices before very long. On this question Sir David made it clear that the board's price policy will be based on the need to cover costs in maintaining the supply of gas and its by-products and on the provision of " a reasonable dividend " in present circumstances. CUSTOS.