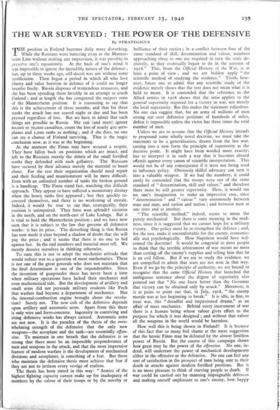 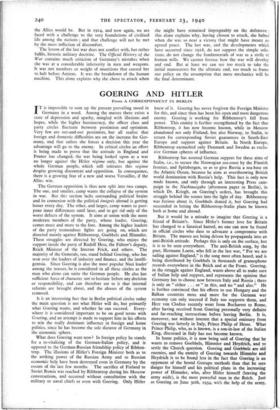 THE WAR SURVEYED : THE POWER OF THE DEFENSIVE

THE position in Finland becomes daily more disturbing. While the Russians were battering away at the Manner- heim Line without making any impression, it was possible to preserve one's equanimity. At the back of one's mind it was impossible to ignore the incredible nature of the defence ; but, up to three weeks ago, self-deceit was not without some justification. Then began a period in which all who love liberty and value heroism in defence of it could no longer breathe freely. Russia disposes of tremendous resources, and she has been spending them lavishly in an attempt to crush Finland ; and at length she has conquered the outpost zone of the Mannerheim position. It is reassuring to say that this is the achievement of three months, and that for three weeks the attack has not ceased night or day and has been pressed regardless of loss. But we have to admit that such things are possible to Russia. She can (and must) ignore 6o,000 or 70,000 casualties, count the loss of nearly 400 aero- planes and t,000 tanks as nothing ; and if she does, no one can see a chance of Finland surviving. That is the tragic conclusion now, as it was at the beginning.

At the moment the Finns may have secured a respite. They have fallen back on positions which are intact, and left to the Russians merely the debris of the small fortified works they defended with such gallantry. The Russians have secured by their advance merely the material to boast about. For the rest their organisation should need repair and their feeding and munitionment will be more difficult. Even with an unlimited number of tanks the broken ground is a handicap. The Finns stand fast, watching this difficult approach. They appear to have suffered a momentary dismay when the heavy tanks first appeared ; but they quickly re- covered themselves, and there is no weakening of morale. Indeed, it would be true to say that, strategically, their position is unimpaired. They have won splendid victories in the north, and on the north-east of Lake Ladoga. But it is vital to hold the Mannerheim position ; and we have now seen that it is subject to the law that governs all defensive works: it has its price. The disturbing thing is that Russia has now made it clear beyond a shadow of doubt that she will pay the price ; and it seems that there is no one to bid against her. In the end numbers and material must tell. We merely deceive ourselves in thinking otherwise.

To state this is not to adopt the mechanist attitude that would reduce war to a question of mere mathematics. There is not one of the great generals who does not maintain that the-final determinant is one of the imponderables. Since the invention of gunpowder there has never been a time when military operations have lacked their mechanist and even mathematical side. But the development of artillery and small arms did not persuade military students like Foch that warfare had become a department of mechanics. Has the internal-combustion engine brought about the revolu- tion? Surely not. The new cult of the defensive depends upon artillery and automatic arms. Apart from this there is only wire and ferro-concrete. Ingenuity in contriving and siting defensive works has always existed. Automatic arms are not new. It is the paradox of the thesis of the over- whelming strength of the defensive that the only new weapons—the aeroplane and the tank—are essentially offen- sive. To maintain in one breath that the defensive is so strong that there must be an impossible preponderance of men and weapons in the attack, and that the most impressive feature of modern warfare is the development of mechanised divisions and aeroplanes, is something of a feat. But those who maintain the defensive thesis must achieve that feat if they are not to jettison every vestige of realism.

The thesis has been stated in this way: "Armies of the highest fighting capacity cannot make up for inadequacy of numbers by the valour of their troops or by the novelty or brilliance of their tactics ; in a conflict between foes of the same standard of skill, determination and valour, numbers approaching three to one are required to turn the scale de- cisively, as they eventually began to do in the autumn of 1918." This, from the Official History of the War, is at least a point of view ; and we are bidden apply " the scientific method of studying the evidence." Truth, how- ever, forces one to admit that any scientific study of the evidence merely shows that the text does not mean what it is held to mean. It is contended that the reference to the Allied armies in 1918 shows that the ratio applies to the general superiority required for a victory in war, not merely the local superiority. But this makes the statement ridiculous. No one can suggest that, for an army of millions of men strung out over defensive positions of hundreds of miles, defeat is impossible unless the victor has three times the total number of men.

Unless we are to assume that the Official History intends to propound some wholly novel doctrine, we must take the statement to be a generalisation, drawn from the last war, casting into a new form the principle of superiority at the decisive point. It might have been worded more exactly; but to interpret it in such a way that it becomes absurd offends against every canon of scientific interpretation. This would not be of any consequence if it were not being used to influence policy. Obviously skilful advocacy can turn it into a valuable weapon. If we had the numbers, it could easily be contended that the troops were not of. the same standard of " determination, skill and valour," and therefore there must be still greater superiority. Here, it would tax no one's imagination to make an impressive case, since " determination " and " valour " vary enormously between man and man, and nation and nation ; and between men at one time and at another.

" The scientific method," indeed, seems to mean the purely mechanical. But there is some meaning in the mad- ness, since it is suggested that we cannot hope for a military victory. Our policy must be to strengthen the defence ; and, for the rest, make it uncomfortable for the enemy, economic- ally and psychologically. How Napoleon would have wel- comed the doctrine! It would be congenial to most people to think that the terrible arbitrament of war meant no more than cutting off the enemy's supplies and telling him that he is an evil fellow. But if we are to study the evidence, we are compelled to admit that wars are not won in that way.

Even if we go by the principle of authority, we are bound to recognise that the same Official History that launched the ambiguous sentence about the degree of superiority also pointed out that " No one knew better than the Germans that victory can be obtained only by attack." Moreover, it is at pains to point out that, in July, 1918, " the enemy morale was at last beginning to break." It is idle, in fine, to treat war, this " dreadful and impassioned drama," as an affair of mere mechanics. Behind every instrument of war there is a human being whose valour gives effect to the purpose for which it was designed ; and without that valour all the weapons in the world would be harmless.

How well this is being shown in Finland! It is because of this fact that so many feel shame at the mere suggestion that the heroic Finns may be defeated by the almost limitless power of Russia. But the course of this campaign shows how great may be the power of the offensive. No one, in- deed, will underrate the power of mechanical developments either in the offensive or the defensive. No one can feel any sort of satisfaction in the prospect of men being sent to their death in attacks against modern fortified positions. But it is no more pleasant to think of starving people to death. If war could be carried out by manning impregnable defences and making oneself unpleasant to one's enemy, how happy the Allies would be. But in 1914, and now again, we are faced with a challenge to the very foundations of civilised life among the nations ; and that challenge will not be met by the mere infliction of discomfort.

The lesson of the last war does not conflict with, but rather fulfils, historic military doctrine. The Official History of the War contains much criticism of Germany's mistakes when she was at a considerable inferiority in men and weapons. It was not numbers or weight of munitions that caused her to halt before Amiens. It was the breakdown of the human machine. This alone explains why she chose to attack when she might have remained impregnably on the defensive ; this alone explains why, having chosen to attack, she halted when she was so near a victory that might have meant an agreed peace. The last war, and the developments which have occurred since 1918, do not support the simple solu- tions, do not change the fundamentals of war as a strife of human wills. We cannot foresee how the war will develop and end. But at least we can see too much to take the initial manoeuvres for the ultimate end, too much to frame our policy on the assumption that mere mechanics will be the final determinant.