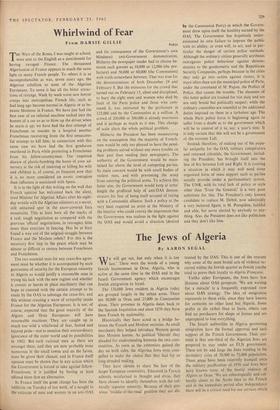 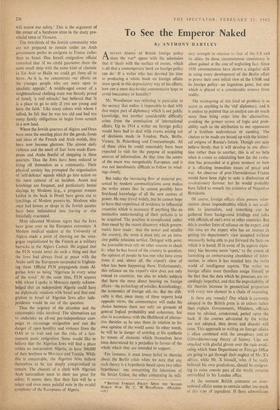 The Jews of Algeria

By AARON SEGAL E will get out, but only when it is too late.' These were the words of a young Jewish businessman in Oran, Algeria, who is active at the same time in the OAS and in the Israeli Government agency which encourages Jewish emigration to Israel.

The 130,000 Jews resident in Algeria today are grouped largely in the urban areas. There are 30,000 in Oran and 25,000 in Constantine alone. Their presence in Algeria dates back to the Spanish Inquisition and since 1870 they have been French by nationality.

Historically they have acted as a bridge be- tween the French and Moslem societies. As small merchants they helped introduce Western goods into Moslem homes. As political 'liberals' they pleaded for understanding between the two com- munities. As soon as the extremists gained the day on both sides, the Algerian Jews were com- pelled to make the choice that they had for so long dreaded making.

They have chosen to share the fate of the larger European community. Educated in French schools, secularised in thought and dress, they have chosen to identify themselves with the cul- turally superior minority. Because of their pre- vious 'middle-of-the-road' position they are dis- trusted by the OAS. This is one of the reasons why some of the most brutal acts of violence oc- curred within the Jewish quarter as Jewish youths tried to prove their loyalty to Algerie Francaise.

Unlike other Europeans, the Jews have few illusions about OAS prospects. 'We are waiting for a miracle' is a frequently expressed view about ORS strategy. The idea of emigration represents to them exile, since they have known for centuries no other land but Algeria. Some prefer to die rather than to leave, others can find no purchasers for shops or homes and are unprepared to lose everything.

The Israeli authorities in Algeria promoting emigration have the formal approval and tacit support of the French Government. Their esti- mate is that one-third of the Algerian Jews are prepared to stay under an FLN government. These are by and large the Jews residing in the secondary cities of 50,000 to 75,000 population. These areas have been relatively tranquil since the military pacification of 1958 and Jews here have known -none of the bestial violence of Algiers or Oran. 'We are ethnologically and cul- turally closer to the Arabs than to the French and in the immediate period after independence there will be a critical need for our services which will assure our safety.' This is the argument of the owner of a hardware store in the dusty pro- incial town of Tlemcen.

The two-thirds of the Jewish community who are not prepared to remain under an Arab government prefer to emigrate to France rather than to Israel. One Israeli emigration official remarked that `if we could guarantee them the same small shop with the same kind of clientele in Tel Aviv or Haifa we could get them all to leave. As it is, we concentrate our efforts on the younger people who are more open to idealistic appeals.' A middle-aged owner of a neighbourhood clothing store was fiercely proud of Israel; 'a real miracle,' but believed that 'it is a place to go to only if you are young and have the faith.' Like many others with whom I talked, he felt that he was too old and had too many family obligations to begin from scratch in a new land.

Where the Jewish quarters of Algiers and Oran were once the meeting place for the goods, foods and ideas of the French and Arab worlds, they have now become ghettoes. The almost daily violence and the smell of fear have made Euro- peans and Arabs fearful of shopping in these quarters. Thus the Jews have been reduced to living off themselves as a community. Their physical anxiety has prompted the organisation of 'self-defence' squads which go into action on the mere rumour of an incident. Arson and bombings are frequent, and particularly brutal slayings by Moslems (e.g., a pregnant woman knifed in the back in Oran) have given rise to lynchings of Moslem passers-by. Moslems who once had homes or shops in the Jewish quarter have been intimidated into leaving or else forcefully evacuated.

Most educated Moslems regret that the Jews have gone over to the European extremists. A Moslem medical student at the University of Algiers made a point of showing me the syna- gogue requisitioned by the French as a military barracks in the Algiers Casbah. He argued that the FLN would never do such a thing and that the Jews had always lived at peace with the Arabs until the Europeans succeeded in frighten- ing them. Official FLN propaganda treats Al- gerian Jews as being 'Algerians in every sense of the word.' At the same time, FLN sources with whom I spoke in Morocco openly acknow- ledged that an independent Algeria could have no diplomatic relations with Israel and that emi- gration to Israel of Algerian Jews after inde- pendence would be out of the question.

Thus the urgency of the situation and the catastrophic risks involved. The alternatives are to undertake an all-out pre-independence cam- paign to encourage emigration and run the danger of open hostility and violence from the OAS or to wait and run the risks of a last- moment panic emigration. Some would like to believe that the Algerian Jews will find a place within an independent Algeria, as have 300,000 of their brethren in Morocco and Tunisia. While this is conceivable, the Algerian Jews believe themselves to be too deeply compromised to remain. The chances of a clash with Algerian Arab nationalism seem to them too great for safety. It seems, then, that their fate will be a minor and even more painful note in the exodal symphony of the Europeans of Algeria.