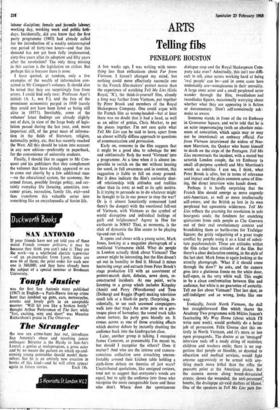 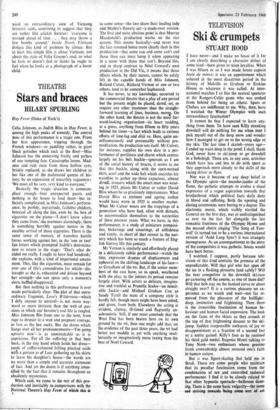 A few weeks ago, I was writing with some- thing less than enthusiasm about Far from Vietnam. I haven't changed my mind; but nothing could more effectively reconcile one to the French film-makers' protest movie than the experience of watching Tell Me Lies (Gala Royal, 'X'), the think-it-yourself film, already a long way farther from Vietnam, put together by Peter Brook and members of the Royal Shakespeare Company. One could argue with the French film as wrong-headed—but at least there was no doubt that it had a head, as well as an editor of genius, Chris Marker, to put the pieces together. I'm not sure quite what Tell Me Lies can be said to have, apart from an almost wilfully diffuse approach to questions of communication and persuasion.

Early on, someone in the film suggests that it might be a good idea to sabotage the BBC and subliminally flash the word 'Vietnam' into a programme. At a time when it is almost im- possible to switch on the BBC without hearing the word, in full awareness and in context, this suggestion is liable to fall on stony ground. But it does indicate the film's curiously shut- off relationship with attitudes and realities other than its own; as well as its split motive. Is it trying to persuade us to do whatever might be thought to lie in our power to stop the war? Or is it almost luxuriantly concerned (and there's the danger) with the emotional fall-out of Vietnam, with Vietnam as the symbol of world disruption and individual feelings of guilt and helplessness? Agony in Hue for cartharsis in NW6? That, at moments, is the stick of dynamite the film seems to be playing tip-and-run with.

It opens and closes with a young actor, Mark Jones, looking at a magazine photograph of a mutilated Vietnamese child. What do people in London actually think about Vietnam? The answer might be interesting, but the film doesn't set out in humility to find it. Idstead it mixes hectoring songs and extracts from Peter Brook's stage production US with an assortment of protest-march shots, debates, news shots, re- constructed incidents. At one point, we're listening to a group which includes Kingsley (Amis) and Perry (Worsthorne) and Tom (Driberg) and Reggie (Paget) making television small talk at a black-tie party. (Surprising, in- cidentally, to see such seasoned campaigners walk into that trap.) An actor puts on a gro- tesque piece of horseplay; the sound track talks about torture; the party goes blandly on. It comes across as one of those crushing effects which destroy debate by instantly shunting the audience back into the kindergarten class.

Later, another group is talking. I recognise James Cameron, as presumably I'm meant to, but should I recognise the others? Does it matter? And who are the intense and camera- conscious collection seen crouching uncom- fortably around their kitchen table holding a sixth-form debate on theories of just wars? Unattributed qUotations, like unsigned reviews, tend not to suggest that •everyone's words are equal, but to split the audience into those who recognise the more recognisable faces and those who don't. Where does the spontaneous dialogue stop and the Royal Shakespeare Com- pany take over? Admittedly, this isn't too diffi- cult to tell, since actors working hard at being `real people' can be—and in some cases here undeniably are—conspicuous in their unreality. A large stout actor and a small perplexed actor wander through the film, tweedledum and tweedledee figures, occasionally worrying about whether what they are appearing in is fiction or documentary. Don't self-consciously ask: make us aware.

Someone stands in front of the us Embassy in Grosvenor Square, and we're told that he is an actor impersonating (with an absolute mini- mum of conviction, which again may or may not be intentional) an embassy official. Far from Vietnam interviewed the widow of Nor- man Morrison, the Quaker who burnt himself to death on the steps of the Pentagon. Tell Me Lies reconstructs the incident, with a muted but actorish London couple, the us Embassy (a small all-purpose symbol) and Mrs Morrison's words as subtitles. I can see, I think, what Peter Brook is after, but in terms of relevance and impact and the plain common sense of film- ing, the direct interview wins hands down.

Perhaps it is hardly surprising that the French film should emerge as more cogently anti-American, as well as more intellectually self-aware, and the British as lost in its own perplexed but egocentric wilderness. Tell Me Lies reflects the yearning for revolution in safe bourgeois souls; the fondness for snatching quOtations from such people as Che Guevara out of their real revolutionary context and brandishing them as battle-cries for Trafalgar Square; the grisly vulgarising of a great tragic conflict by people using it as a kind of substi- tute psychoanalysis. These are attitudes within the film rather than attitudes of the film. But there's a clear declaration coming, in the style of the last shot. Mark Jones is again looking at the atrocity photograph. 'What if it should come through the door?' he asks, and the camera goes into a glutinous freeze on the white door, half-open, in the very white wall. This ought to be a clean confrontation between film and audience, but white is no guarantee of austerity. Tell me lies about Vietnam? That last shot, so self-indulgent and so wrong, looks like one way.

Ironically, Inside North Vietnam, the dull but straightforward film which shares the. Academy Two programme with Miklos Jancso's fascinating My Way Home (about which I'll write next week), would probably do a better job of persuasion. Felix Greene shot this en- tirely in North Vietnam, and it's more or less open propaganda. The doctor at an 'unstaged' interview reels off a ready string of statistics; children and teachers smile; there is no sug- gestion that people so likeable, so devoted to education and medical services,- would fight anyone aggressively or be armed with any- thing much more lethal than the rifles the peasants point at the American planes. But, the camera moves along bomb-devastated: streets; shows the wounded, the anti-personnel bombs, the drainpipe air-raid shelters of Hanoi. One of the speakers in Tell Me Lies puts for- ward an extraordinary view of Vietcong terrorist raids, contriving to suggest that they are rather like cricket fixtures: 'everyone is warned ahead of time . . . they may throw a few bombs around.' Inside North Vietnam dodges this kind of problem by silence. But at least this simple film is about Vietnam; not about the state of Felix Greene's soul, or what he feels or doesn't feel or thinks he ought to feel when he looks at a photograph of a burnt child.