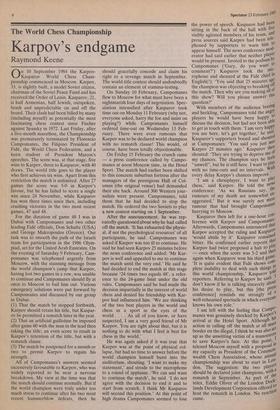 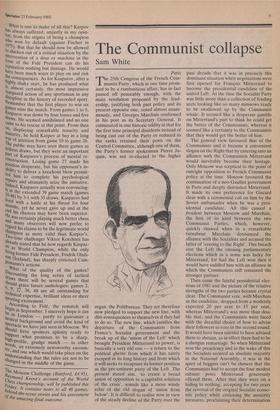 On 10 September 1984 the Karpov- Kasparov World Chess Cham- pionship commenced in Moscow. Karpov, 33, is slightly built, a model Soviet citizen, chairman of the Soviet Peace Fund and has received the Order of Lenin. Kasparov, 21, is half Armenian, half Jewish, outspoken, brash and unpredictable on and off the board. Their clash had been billed by many (including myself) as potentially the most fascinating chess contest since Fischer against Spassky in 1972. Last Friday, after a five-month marathon, the Championship was prematurely terminated by Florencio Campomanes, the Filipino President of Fide, the World Chess Federation, and a keen student of President Marcos's speeches. The score was, at that stage, five wins to Karpov, three to Kasparov, with 40 draws. The world title goes to the player who first achieves six wins. Apart from this restriction the match is unlimited. After 27 games the score was 5-0 in Karpov's favour, but he has failed to score a single win since 24 November, while Kasparov has won three times since then, including crushing victories in the two most recent games, 47 and 48.

For the duration of game 48 I was in Dubai with Campomanes and two other leading Fide officials, Don Schultz (USA) and George Makropoulos (Greece). Our task was to smooth the path of the Israeli team for participation in the 1986 Olym- piad, set for the United Arab Emirates. On the evening of Saturday 9 February, Cam- pomanes was telephoned urgently from Moscow, with the stunning message from the world champion's camp that Karpov, having lost two games in a row, was unable to continue and Campomanes should fly at once to Moscow to bail him out. Various emergency solutions were put forward by Campomanes and discussed by our group in Dubai: (1) That the match be stopped forthwith, Karpov should retain his title, but Kaspar- ov be permitted a rematch later in the year.

(2) That an artificial guillotine be imposed after game 60 with the man in the lead then taking the title; an even score to result in Karpov's retention of the title, but with a rematch clause.

(3) The match be postponed for a month or two to permit Karpov to regain his strength.

All of Campomanes's answers seemed excessively favourable to Karpov, who was widely reported to be near a nervous breakdown. My view at the time was that the match should continue normally. But if the world champion were truly under too much stress to continue after his two most recent hammerblow defeats, then he should gracefully concede and claim his right to a revenge match in September. The world title contest should undoubtedly contain an element of stamina-testing.

On Sunday 10 February, Campomanes flew to Moscow for what must have been a nightmarish four days of negotiation. Spec- ulation intensified after Kasparov took time out on Monday 11 February (why not, everyone asked, harry the foe and insist on playing?) while Campomanes himself ordered time-out on Wednesday 13 Feb- ruary. There were even rumours that Karpov was to be declared world champion with no rematch clause! This would, of course, have been totally objectionable.

On Friday 15 February the crunch came — a press conference called by Campo- manes at noon Moscow time, in the Hotel Sport. The match had earlier been shifted to this concrete suburban fortress after the managers of the prestigious Hall of Col- umns (the original venue) had demanded their site back. Around 300 Western jour- nalists were present. Campomanes, told them that he had decided to stop the match. He ordered the two Soviets to play 4 new contest starting on 1 September.

After the announcement, he was rep- eatedly questioned about why he had called off the match. 'It has exhausted the physic- al, if not the psychological resources' of all participants, he said. Campomanes was asked if Karpov was too ill to continue. He said he had seen Karpov 25 minutes before the news conference and added: `Mr Kar- pov is well and appealed to me to continue the match until the very end.' He said he had decided to end the match at this stage because '24 times two equals 48', a refer- ence to the 24-game limit under the old rules. Campomanes said he had made the decision impartially in the interest of world chess and denied his friendship with Kar- pov had influenced him. 'We are thinking of the two best players in the world and chess as a sport in the eyes of the world . . . . As all of you know, or have suspected, I am a very good friend of Mr Karpov. You are right about that, but it is nothing to do with what I feel is best for chess in the world.'

He was again asked if it was true that Karpov was at the point of physical col- lapse, but had no time to answer before the world champion himself burst into the auditorium, shouting: 'I want to make my statement,' and strode to the microphone to a round of applause..We can and want to continue the match', he said. 'I do not 'agree with the decision to end it and to start from scratch. I think Mr Kasparov will second this position.' At this point of high drama Campomanes seemed to lose the power of speech. Kasparov had been sitting in the back of the hall with fiVe, visibly agitated members of his team, and press sources said Karpov had been tele- phoned by supporters to warn him to appear himself. The news conference mod' erator had said earlier that neither piger would be present. Invited to the podium by Campomanes (`Gary, do you want to comment?') Kasparov took the laic' rophone and shouted at the Fide chief in English(!): 'You said that 25 minutes ago the champion was objecting to breaking our the match. Then why are you making all of this show? Will you please answer this question?' With members of the audience booing and heckling, Campomanes told the angry players he would have been happY discuss the decision, but had not been able to get in touch with them. 'I am very hapPY you are here, let's get together,' he said; Kasparov's supporters booed and shouted at Campomanes: 'You said you just WI Karpov 25 minutes ago.' Kasparov then, shouted: 'They are trying to deprive me °I my chances. The champion says he feels "unwell", but he is still here. I want toplakY with no time-outs and no intervals. Wit" every delay Karppv's chances improve. „ `I am a chessplayer, I want to Pin; chess,' said Karpov. He told the nets, conference: 'As we Russians say, the rumours of my death are somewhat ex- aggerated.' But it was surely not Mele rumour that had brought Campomanes hurrying to Moscow. Kasparov then left for a one-hour eon' ference with Karpov and Campomanest Afterwards, Campomanes announced On Karpov accepted the ruling and Kaspar°; `would abide by it'. Kasparov remained bitter. He confirmed earlier reports the Karpov had twice proposed a halt to play once when the score was 5-2 and the again when Kasparov won his third game' `It is quite evident that Fide shows com- plete inability to deal with such things rd this world championship,' Kasparov W14 reporters. Referring to Karpov he said: don't know if he is talking sincerely aboti his desire to play, but this [the Press, e conference] reminds me strongly of well-rehearsed spectacle in which everYon" knows his own role.'

I am left with the feeling that CamP°," manes was genuinely shocked by Karpov .s arrival at the Hotel Sport. Although llist action in calling off the match at all nts, border on the illegal, I think he was also se' up as the unwitting victim of a manoeuvre/ to save Karpov's face. At this point,. telexed Moscow myself with a proposal In my capacity as President of the Conal°Pai wealth Chess Association, whose annul championship was about to start in 1-°11; don. The suggestion: the two playa ' should be declared joint champions, with a rematch in September. As part of the telex, Eddie Oliver of the London D°e',, lands Development Corporation offered . host the rematch in London. No reaction came. What is one to make of all this? Karpov has always suffered, unjustly in my opin- ION, from the stigma of being a champion who won by default (against Fischer in 1975). But that he should now be allowed to chicken out of a critical situation by the intervention of a deus ex machina in the form of the Fide President can do his reputation nothing but damage. He would have been much wiser to play on and risk the consequences. As for Kasparov, after a highly shaky start, he has produced what IS, almost certainly, the most impressive rearguard action of any sportsman in any discipline in the history of recorded sport. Remember that the first player to win six games wins the match. From games 1 to 9, Kasparov was down by four losses and five draws. He seemed annihilated and no one came to his rescue at this point. From then °n, displaying remarkable tenacity and maturity, he held Karpov at bay in a long le of attrition from game 10 to game 26. tile public may have seen these games as tedious draws, but they were an important Part of Kasparov's process of mental re- construction. Losing game 27 made his Position desperate, but his opponent's in- ability to deliver a knockout blow permit- ted him to complete his psychological repairs and ultimately seize the initiative. !ildeed, Kasparov actually won convincing- ly the extended 39 game match (games .0-48)with b 3-1 with 35 raws. asparov had lived a knife at d his tKhroat for four months, yet he never gave up and at the end his chances may have been superior. was certainly playing much better chess and many observers will now prefer to regard his claims to be the legitimate world Twpion as more valid than Karpov's. wetime challenger Viktor Korchnoi has already stated that he now regards Kaspar- ici,v. as World Champion, while the only lying former Fide President, Fridrik Olafs- stUl (Iceland), has sharply criticised Cam- Pomanes's actions. What of the quality of the games? aeounting the long series of tactical draws there will be several games that Should grace future anthologies: games 2, , 0, 27, 36, 48 are all outstanding for technical expertise, brilliant ideas or sheer 5Porting excitement.

According to Fide, the rematch will

i_ gegru in September. I sincerely hope it can e in London — partly to guarantee a neutral background and avoid the kind of spectacle we have just seen in Moscow. We should have sponsors aplenty ready to support what promises to be a sharp, MO-profile, grudge match — in other words, an extremely newsworthy encoun- ter, and one which would take place on the understanding that the rules are not to be changed in the middle of the game.

-1,1e Moscow Challenge (Batsford, f4.95), Raymond Keene's account of the World Chess championship, will be published this ft'iday. It contains notes to all 48 games, 'ehmd-the-scene stories and his assessment of the amazing final outcome.