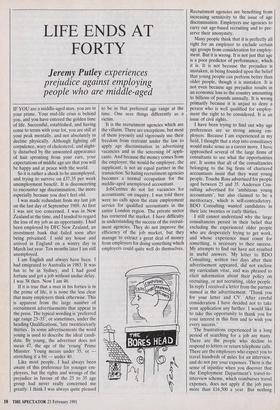 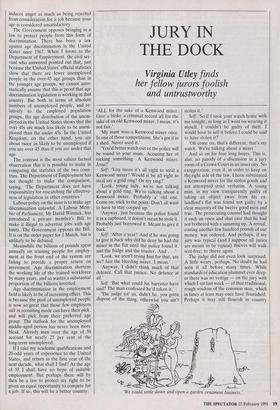 prejudice against employing people who are middle-aged

IF YOU are a middle-aged man, you are in your prime. Your mid-life crisis is behind you, and you have entered the golden time of life. Successful, established, and having come to terms with your lot, you are still at your peak mentally, and not absolutely in decline physically. Although fighting off corpulence, wary of cholesterol, and slight- ly disturbed by the unwonted appearance of hair sprouting from your ears, your expectations of middle age are that you will be happy and at peace with the world.

So it is rather a shock to be unemployed, and trying to survive on £37.35 per week unemployment benefit. It is disconcerting to encounter age discrimination, the more especially because you don't feel old.

I was made redundant from my last job on the last day of September 1989. At first I was not too concerned. I was in New Zealand at the time, and I tended to regard the loss of my job as an opportunity. I had been employed by DFC New Zealand, an investment bank that failed soon after being privatised. I sold my house and arrived in England on a wintry day in March last year. Ten months later I am still unemployed.

I am English and always have been. I had emigrated to Australia in 1983. It was fun to be in Sydney, and I had good fortune and got a job without undue delay. I was 38 then. Now I am 46.

If it is true that a man in his forties is in the prime of life, it is none the less clear that many employers think otherwise. This is apparent from the large number of recruitment advertisements that appear in the press. The typical wording is 'preferred age range 25-35', or sometimes, under the heading Qualifications, 'late twenties/early thirties'. In some advertisements the word young is used to describe the ideal candi- date. By young, the advertiser does not mean 47, the age of the 'young' Prime Minister. Young means under 35, or — stretching it a bit — under 40.

Like most people, I had always been aware of this preference for younger em- ployees, but the rights and wrongs of the prejudice in favour of the 25 to 35 age group had never really concerned me greatly: I think I was always quite pleased to be in that preferred age range at the time. One sees things differently as a victim.

It is the recruitment agencies which are the villains. There are exceptions, but most of them joyously and vigorously use their freedom from restraint under the law to apply age discrimination in advertising vacancies and in the screening bf appli- cants. And because the money comes from the employer, the would-be employee, the supplicant, is not an equal partner in the transaction. So hating recruitment agencies becomes a normal occupation for the middle-aged unemployed accountant.

JobCentres do not list vacancies for accountants: on enquiry, I was told there were no calls upon the state employment service for qualified accountants in the entire London region. The private sector has cornered the market. I have difficulty in understanding the success of the recruit- ment agencies. They do not improve the efficiency of the job market, but they manage to extract a great deal of money from employers for doing something which employers could quite well do themselves. Recruitment agencies are benefiting from increasing sensitivity to the issue of age discrimination. Employers use agencies to carry out age-based recruiting and to pre- serve their anonymity.

ment. But it is wrong. It is not just that age is a poor predictor of performance, which

it is. It is not because the prejudice is mistaken, in being founded upon the belief that young people can perform better than older people, though it is mistaken. It is not even because age prejudice results in an economic loss to the country amounting to billions of pounds annually. It is wrong primarily because it is unjust to deny a person who is well qualified for employ- ment the right to be considered. It is an issue of civil rights.

I have been trying to find out why age preferences are so strong among em- ployers. Because I am experienced in my field, I thought that a step into consultancy would make sense as a career move. I have approached several of the large firms of consultants to see what the opportunities are. It seems that all of the consultancies belonging to the big firms of chartered accountants insist that they want young people. Touche Ross advertised for people aged between 25 and 35. Andersen Con- sulting advertised for 'ambitious young accountants', but also claimed to be a meritocracy, which is self-contradictory. 13D0 Consulting wanted candidates in their late twenties or early thirties.

I still cannot understand why the large consultancies persist in their belief that excluding the experienced older people who are desperately trying to get work, and whose experience must count for something, is necessary to their success.

My attempts to find out have not resulted in useful answers. My letter to BDO Consulting, written two days after their advertisement appeared, did not enclose my curriculum vitae, and was phrased to elicit information about their policy on recruiting, or not recruiting, older people. In reply I received a letter from the partner named in the advertisement. 'Thank you for your letter and CV. After careful consideration I have decided not to take your application any further. I would like to take this opportunity to thank you for your interest in this firm and to wish you every success.'

The frustrations experienced in a long period of searching for a job are many. There are the people who decline to respond to letters or return telephone calls.

There are the employers who expect you to travel hundreds of miles for an interview, and do not pay your expenses. There is the sense of injustice when you discover that the Employment Department's travel-to- interview scheme, which reimburses travel expenses, does not apply if the job pays more than £16,500 a year. But nothing

induces anger as much as being rejected from consideration for a job because your age is considered unsatisfactory. The Government opposes bringing in a law to protect people from this form of discrimination. There has been a law against age discrimination in the United States since 1967. When I wrote to the Department of Employment, the civil ser- vant who answered pointed out that, just because the United States' official statistics show that there are fewer unemployed people in the over-45 age groups than in the younger age groups, we cannot auto- matically assume that this is proof that age discrimination legislation is working in that country. But both in terms of absolute numbers of unemployed people, and re latively to the employed population groups, the age distribution of the unem- ployed in the United States shows that the over 45s are much less likely to be unem- ployed than the under 45s. In the United Kingdom, on the other hand, you are about twice as likely to be unemployed if you are over 45 than if you are under that age. The contrast is the most salient factual observation that it is possible to make in comparing the statistics of the two coun- tries. The Department of Employment has not thought to make the comparison, saying, The Department does not have responsibility for researching the effective- ness of legislation in other countries.' Labour policy on the issue is to make age discrimination unlawful. A Labour Mem- ber of Parliament, Mr David Winnick, has introduced a private member's Bill to make it illegal to advertise jobs with age limits. The Government opposes the Bill. It is on the order paper for 1 March, but is unlikely to be debated. Meanwhile the billions of pounds spent annually on training people for employ- ment at the front end of the system are failing to provide a proper return on investment. Age discrimination shortens the working life of the trained workforce by many years, and so wastes a substantial proportion of the billions invested. Age discrimination in the employment field is likely to be of increasing effect. This is because the pool of unemployed people is now so great that those few employers still in recruiting mode can have their pick, and will pick from their preferred age group. The outlook for the unemployed middle-aged person has never been more bleak. Already men over the age of 50 account for nearly 25 per cent of the long-term unemployed. If I take my academic qualifications and 20-odd years of experience to the United States, and return in the first year of the next decade, what shall I find? At the age of 55 I shall have no hope of suitable employment. But perhaps there will by then be a law to protect my right to be given an equal opportunity to compete for a job. If so, this will be a better country.