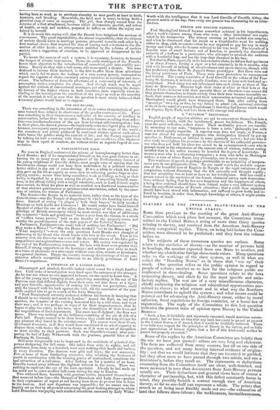 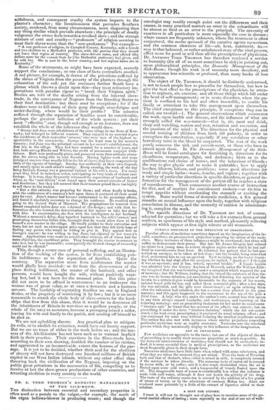 SOME time previous to the meeting of the great Anti-Slavery Convention which took place last summer, the Committee trans- mitted to the United States a string of more than thirty queries relating to slavery, and received from the American Anti-Slavery Society categorical replies. These, on being laid before the Com- mittee, were directed to be published; and they form the volume before us.

The subjects of these numerous queries are various. Some relate to the statistics of slavery—as the number of persons held. in bondage, the number exported from one State to another, and whether any clandestine foreign slave-trade exists. Many questions refer to the workings of the slave system, as well in what are called the "Breeding States" as in those that "use up" their stock. One question refers to the public opinion in regard to people of colour; another as to how far the religious public are implicated in slave-dealing. Some questions relate to the laws respecting slavery, and elicit by far the most specific and satis- factory replies. The rest are of a very miscellaneous character, chiefly embracing the religious and educational opportunities per- mitted to slaves; to what extent and in what way the Northern States contribute to uphold the system ; and what means could be pointed out for advancing the Anti-Slavery cause, either by moral agitation, fiscal regulations by foreign countries, or a home-law of registration. The reply of the Committee to this last question indicates the present state of opinion upon Slavery in the United States- " Such a law, if faithfully and vigorously executed, would doubtless accom- plish much ; but we have no idea that any such law could be passed at present in the United States, or if passed, that it would be faithfully enforced. There is so little true respect for the principles of liberty in the nation, and so little just appreciation of human rights, that a law of this kind could neither be passed nor properly executed."

Some of the replies by the American Committee are briefer than the one we have just quoted: others are very long and elaborate. The facts are collected from many sources, but all on one side of the question, and not many bearing internal evidence of origina- lity: not that we would intimate that they are invented or garbled, but they often seem to have passed through two minds' and one a litterateur's before they reach us. The statements or deductions emanating from the Committee itself are clear, well-finished, and more measured in tone than documents from Anti-Slavery persons usually are. Their deductions and general views have of course a character of partisanship, but, with this defect constantly borne in mind, they possibly furnish a correct enough view of American slavery, so far as one-half can represent a whole. The points that struck us as being most forcibly made out are—the exhaustion of land that follows slave-labour; the recklessness, inconsiderateness,

selfishness, and consequent cruelty the system imparts to the planter's character ; the licentiousness that pervades Southern society, rendered, from many circumstances, more disgusting than any thing similar which prevails elsewhere ; the principle of deadly vengeance the owner feels towards a revolted slave ; and the strange mixture of cant and cruelty— " professors" of religion seeming to treat their slaves worse than the "non-professors." For example-

" A non-professor of religion, in Campbell County, Kentucky, sold a female and two children to a Methodist professor, with the proviso that they should not leave that region of country. The slave-drivers came, and offered fifty dollars more for the woman than he (the Methodist professor) had given, and he sold her. She is now in the lower country, and her orphan babes are in Kentucky."

Some of the statements, as might have been expected, scarcely support the conclusions; or one class of facts contradicts another. A sad picture, for example, is drawn of the privations suffered by the slaves of Virginia from the poverty of the planters through the exhaustion of the soil: yet the overseers further South have a phrase which throws a doubt upon this—they treat refractory im- portations with peculiar rigour to " break their Virginia spirit." Stories are told of the deaths arising from the internal slave- trade, in the conveyance of Negroes from the Breeding States to their final destination : but these must be exceptions ; for if the dealers were to kill many of their gang through over-fatigue and under-feeding, where would be their profits ? The miseries suffered through the separation of families must be considerable, perhaps the greatest infliction of the whole system : yet their most " effective " case, though sad enough as an instance, does not establish the whole of the inference they would draw.

"George and Jane were inhabitants of the same village in the State of Ken- tucky, hut belonged to different masters. They enjoyed in an unusual degree the confidence of their respective ' owners,' who were men of the highest re- spectability in the community. George was the head man in his master's tannery; and Jane was the principal servant in her owner's establishment, the first inn in the village. They had been married for a number of years, and had, both among Blears and Whites, the credit of uncommon conjugal faith- fulness. Both were professedly pious, and possessed more than ordinary educa- tion for slaves, being able to read fluently. Baring lighter work and more indulgent masters than usually fell to the lot of slaves, they knew comparatively little of the rigours of bondage. Sunday was uniformly at their own disposal, and mostly spent in each other's society. Every evening, the work of the day being finished, George was a punctual visitant at his wife's room. For many years they lived in unbroken union, anticipating no fiery trials of violent sun- derings. It is true, they frequently witnessed the separations of husbands and wives, as the soul-drivers' went round upon their annual circuits of horror and desolation ; but they felt assured that their masters prized them too highly to sell them to the traders.

"But a dire calamity was preparing for them ; and when finally it broke, with the suddenness of a summer's bolt upon them, it scattered all their social joys for ever. Jane's master had become embarrassed in his pecuniary affairs, and found it absolutely necessary to change his residence. He resolved upon going to the distant State of Missouri. The preparations for removal were almost completed before Jane was informed of the designs; and with that in- formation she also learned the determination of her master to take her along with him. In consternation, she flew with the intelligence to her husband. Without a moment's delay, they together hastened to the wife's 'owner,' and prostrating themselves before him, besought that he would alffiw Jane to find herseli'a new master in the village, lie finally yielded to their entreaties and tears, but set such an extravagant price upon her, that they felt little hope of finding any person who would be willing to give it. They applied first to George's master : he was willing to buy Jane, but objected to her master's terms. Applications were made to several other citizens, all of whom had the same objection, the exorbitant price. They besought the master to consent to take less, but he was inexorable; consequently the desired change of ownership could not be effected."

This, though a severe case of personal suffering, and an illustra- tion of the working of the system, is far from establishing pub- lic indifference as to the separation of families. Quite the contrary. The separation arose from misfortunes the master would gladly have avoided : so far from the slave-owners of the place feeling indifferent, the master of the husband, and other persons, would have bought the wife, without positively want- ing her, had it not been for the unusual price. But this price did not seem to be affixed in wantonness : to an innkeeper the woman was of great value, as at once a domestic and a business servant. The hardship of separating families no one in England denies, or the propriety of restricting it by law ; but it is no more reasonable to attack the whole body of slave-owners for the hard- ships that flow from this abuse, than it would be to denounce all the inhabitants of Britain in war-time as a godless people, or the whole of the navy as monsters, because a pressgang seized a sailor, leaving his wife and family to the parish, and sending off himself to be shot at.

We are not upholding slavery. Any practical plan to mitigate its evils, or to abolish its existence, would have our hearty support. But we see no trace of either in the work before us ; and the suc- cess of the Abolitionists has not been such as to warrant implicit faith in their practice. Their exertions in the Slave-trade have, according to their own showing, doubled the number of its victims, and aggravated to an inconceivable extent the horrors of the pas- sage. It is yet to be decided, whether their zeal for the abolition of slavery will not have destroyed one hundred millions of British capital in our West Indian islands, without any other effect than throwing back the civilization of the Negroes, imposing on the public great privations in the necessaries of life, compelling us to receive at last the slave-grown productions of other countries, and retarding abolition in every country in the world.