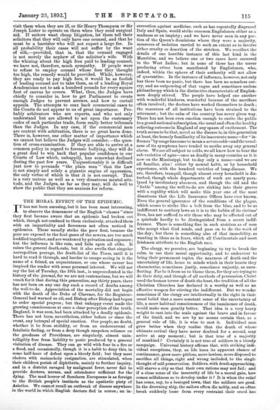 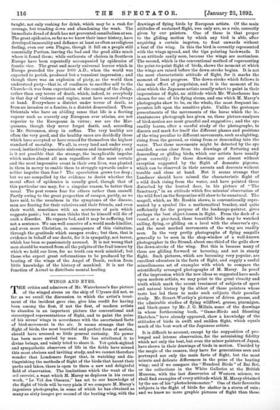 THE MORAL EFFECT OF THE EPIDEMIC.

IT has not been amusing, but it has been most interesting, to observe the demeanour of the English " classes " since they first became aware that an epidemic had broken out which, though not confined to them exclusively, attacked them with an impartiality and fierceness not often noticed in epidemics. These usually strike the poor first, because the poor are exposed to the foul gases of the sewers, are too much huddled together, and are weakened by privation and exposure ; but the influenza is like rain, and falls upon all alike. It raises the general death-rate, but it also swells that singular necropolitan peerage, the death-list of the Times, until it is hard to read it through, and harder to escape seeing in it the name of a friend, an acquaintance, or one whose career has inspired the reader with some personal interest. We will not say the list of Tuesday, the 19th inst., is unprecedented in the history of the journal, for we are not centenarians, but we will vouch for it that during this generation, say thirty years, there has not been on any one day such a record of deaths among the well-to-do. Appreciation of the mortality did not begin with the death of the Duke of Clarence, for the Registrar- General had warned us all, and Bishop after Bishop had begun to order special prayers ; but that unhappy event made the growing consciousness at once a clear perception of the truth. England, it was seen, had been attacked by a deadly epidemic. There has not been, nevertheless, either before or since the event, any betrayal of special emotion. Our people, no doubt, whether it be from stolidity, or from an undercurrent of fatalistic feeling, or from a deep though unspoken reliance on the goodness of Providence, are singularly, almost unin- telligibly free from liability to panic produced by a general visitation of disease. They can go wild with fear in a fire or a flood, and occasionally, though it is a habit to deny this, in some half-hour of defeat upon a bloody field ; but they meet cholera with melancholy resignation, are stimulated, when their children perish of diphtheria, mainly to further inquiry, and in a district ravaged by malignant fever, never fail to provide doctors, nurses, and attendance sufficient for the dying. The mad horror of Southern Europeans is as foreign to the British people's instincts as the apathetic piety of Asiatics. We cannot recall an outbreak of disease anywhere in the world in which English doctors fled in scores ; an in- surrection against medicine, such as has repeatedly disgraced Italy and Spain, would strike common Englishmen either as a. madness or an impiety; and we have never seen in any por- tion of the Queen's dominions where they were a majority, measures of isolation carried to such an extent as to involve either cruelty or desertion of the stricken. We recollect the details of one horrible instance of this last kind in the Mauritius, and we believe one or two cases have occurred in the West Indies ; but in none of these has the terror producing crime been manifested by Englishmen, who indeed, within the sphere of their authority will not allow of quarantine. In the instance of influenza, however, not only has there been no panic, but there has been no senseless out- cry, and no outpouring of that vague and sometimes useless philanthropy which is the distinctive characteristic of English- men deeply stirred. The people have helped one another with wonderful kindness, wonderful because of the sacrifices often involved ; the doctors have worked themselves to death ; the resources of all institutions have been strained to the uttermost ; but the calm of the country has never given way. There has not been even emotion enough to excite the public to a grand national subscription, the usual and often the healthy relieving outcome in England of any spasm of excitement. The truth seems to be that, novel as the disease is, in this generation at least, the homely familiarity of its inaccurate name—for " in fluenz a "by usage has come to mean a severe cold—and the usual- ness of its symptoms have tended to soothe away any genera/ alarm. We are all subject to colds, we all know how to bear the sub-varieties of ague—once as deadly in many counties as it is- now on the Mississippi, but to-day only a name—and we are all familiar, alas ! either by mental habit, or by household experience, with the hundred varieties of lung-disease. We are, therefore, tranquil, though almost every household is dis- turbed, though whole departments of work are nearly para- lysed by involuntary absences, and though the old and the "liable " among the well-to-do are sinking into their graves with a rapidity which will make this year one of the most disastrous that the Life Insurance Offices have ever known. Even the general ignorance of the conditions of the plague, which seems to strike like a bolt from the blue, and to be as indifferent to sanitary laws as it is to the habits of its victims' lives, has not sufficed to stir those who may be affected out of a quietude hardly to be distinguished from a secret indif- ference. There is something fine in such stoicism as of men who accept what God sends, and pass on to do the work of the day; but there is something also of that immobility, as wanting in ideas as in fears, which all Continentals and most Irishmen attribute to the English race.

The clergy, we perceive, are beginning to try to break the calm, to use their moral opportunity, and to endeavour to bring their permanent topics, the nearness of death and the uncertainty of life, home to minds which in their hearts they characterise, sometimes justly, sometimes unjustly, as unre- fleeting. Far be it from us to blame them, for they are trying to do their duty, and though of all methods of persuasion, Christ used the human terror of death the least, the tradition of all the Christian Churches has declared it a worthy as well as an effective weapon for stirring the indifferent. But we wonder sometimes if the clergy are intellectually in the right in their usual belief that a more constant sense of the uncertainty of life, a more habitual consciousness of the imminence of death, would make men greatly better. That idea is a very heavy weight to east into the scale against the brave and in favour of the timid, and we are by no means certain that, as a general rule of life, it is wise to cast it. Individual men grow better when they realise that the death of whose- ultimate arrival they have never doubted for a second, may arrive at any moment ; but is that true of a majority of mankind ? Certainly it is not true of soldiers in a bloody campaign. Universal history affirms that, with striking indi- vidual exceptions, they, as life loses its apparent chance of continuance, grow more pitiless, more lawless, more disposed to sacrifice all things, right and wrong included, to the single thought of self-preservation. Soldiers, with death approaching, will starve a city so that their own rations may not fail; and if a close sense of the insecurity of life be a moral gain, how comes selfishness so to develop under it P It is when the relief has come, say, to a besieged town, that the soldiers are good. In the drowning ship, the sailors often die nobly, and as often. break suddenly loose from every restraint their creed has

taught, not only rushing for drink, which may be a rush for courage, but treading down and abandoning the weak. The immediate dread of death has not prevented cannibalism at sea. The great epidemics, so far as we know their inner history, have developed immorality and defiance at least as often as religious feeling, even our own Plague, though it fell on a people still essentially Puritan, leaving the bad and the good alike much where it found them; while outbursts of cholera in Southern Europe have been repeatedly accompanied by epidemics of frantic vice. The great and nearly universal horror which in Europe preceded the year 1000 A.D., when the world was expected to perish, produced but a transient impression; and though there was an explosion of piety, as the world then understood piety—that is, of readiness to sacrifice self to the Church—it was from expectation of the coming of the Judge, rather than any terror of death, which, indeed, to everybody in that day of violence and rapine, must have seemed always at hand. Everywhere a district under terror of death, as from an invasion or a famine, is a district demoralised. Those Orientals who have an abiding sense that life is a fleeting vapour such as scarcely any European ever attains, are not superior to the Europeans in virtue ; nor are the Mar- quesans, though they never forget death, and, according to Mr. Stevenson, sleep in coffins. The very healthy are often the very good, and the healthy races are decidedly those which have accepted or have roused for themselves the highest standard of morality. We all, in every land and under every creed, instinctively associate sinlessness and immortality; and is it not possible that the strange, the inexplicable impulse which makes almost all men regardless of the most certain and the most impressive event in their own lives, was planted in them in mercy to enable them to struggle upwards under a nobler impulse than fear ? The speculation grows too deep ; but we are compelled by the evidence to doubt whether the moral effect of epidemics is usually good, though that of this particular one may, for a singular reason, be better than usual. The peat rouses fear for others rather than oneself. Partly owing to the great proportion of escapes, partly, as we have said, to the usualness in the symptoms of the disease, men are fearing for their relatives and their friends, and even their world, sometimes with an acuteness of pain which suggests panic; but no man thinks that he himself will die of such a disorder. He expects bed, and it may be suffering, but not a sentence. We can well conceive of a world made kindlier, and even more Christian, in consequence of this visitation, through the gratitude which escapes evoke; but then, that is evidence in behalf of our doubt, for it is sympathy, not terror, which has been so passionately aroused. It is not wrong that men should be warned from all the pulpits of the frail tenure by which we hold our lives, for no truth can work mischief; but those who expect great reformations to be produced by the beating of the wings of the Angel of Death, reckon from little knowledge of the history of mankind. It is not the function of Azrael to distribute mental healing.