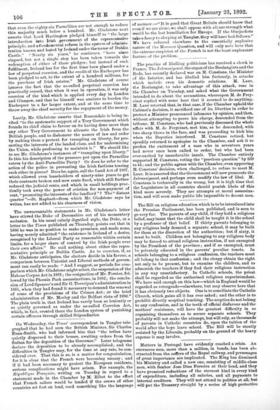 Page 2, 23 January 1892 — The practice of libelling politicians has received a check in
Close

The practice of libelling politicians has received a check in

France. The Intransigeant, the organ of the Boulangists and the Reds, has recently declared war on M. Constans, the Minister of the Interior, and has libelled him furiously, in attacks which include even his domestic relations. M. Laur, the Boulangist, to take advantage of this attack, rose in the Chamber on Tuesday, and asked what the Government intended to do about the accusations, whereupon M. de Frey- cinet replied with some heat that it scorned to do anything. M. Laur retorted that, in that case, if the Chamber upheld the Cabinet's decision, it sacrificed one of its liberties in order to protect a Minister pronounced infamous by opinion, and then, without attempting to prove his charge, descended from the tribune. M. Constans, who had previously discussed the whole affair with M. de Freycinet, met him, as he descended, with two sharp blows in the face, and was proceeding to kick him when the Deputies interfered. M. Constans retired, but speedily returned to apologise to the Chamber, and ask it to pardon the excitement of a man who in seventeen years had never once been called to order, but who had been over-excited by unendurable insult. The Chamber entirely supported M. Constans, voting the "previous question" by 338 to 44 ; and the public agrees with the Chamber, even approving M. Constans' decision, when challenged, to refuse to meet M. Laur. It is asserted that the Government will now prosecute the Intransigeant, and perhaps even modify the law of libel. M. Constans is technically in the wrong, but it is high time that the Legislature in all countries should punish libels of this kind more severely. They are attempts at moral assassina- tion, and will soon make public life impossible to decent men.