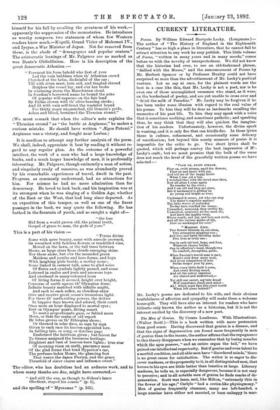 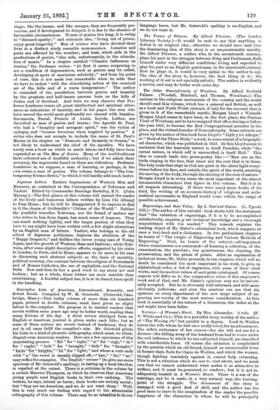 The Man of Genius. By Cesare Lombroso. With Illustrations. (Walter

Scott.)—This is a book written with more pretension than good sense. Having discovered that genius is a disease, and that the signs of degeneration are found more freqtiently in men of genius than in the insane, the author affirms that the repugnance to this theory disappears when we remember that by losing muscles which the apes possess, " and an entire organ the tail," we have gained our intellectual superiority. But if genius and even talent be a morbid condition, and all able men have "disordered minds," there is no great cause for satisfaction. The writer is so eager to dis- cover madness, or thepropensity to it, in all distinguished men, that heroes in his eyes are little better than lunatics at large. Literary madness, he tells us, is especially dangerous, because it is not easy to perceive ; and in all notable men of genius he finds marks of de- generation. Scott was lame, and, like Milton, "extremely thin in the flower of his age;" Carlyle " had a cretin-like physiognomy." Men of genius frequently stammer, many are left-handed, a large number have either not married, or been unhappy in mar- riage ; like the insane, and like savages, they are frequently pre- cocious, and if development be delayed, it is due to the absence of favourable circumstances. If men of genius live long, it is owing to "diseased apathy;" and criminals also, "living out of prison, enjoy great longevity." Men of science who have devoted their lives to a distinct study resemble monomaniacs. Lunatics and poets are affected by the weather; and heat, which aids in the productions of genius, "also aids, unfortunately, in the stimula- tion of mania." In a chapter entitled "Climatic Influences on Genius," the Professor writes : "At first it seems surprising to see a condition of degeneration, such as genius may be called, developing at spots of maximum salubrity;" and from his point of view, this is not made less remarkable when he adds that we have to reckon "with the stimulating action of the ozonized air of the hills and of a warm temperature." The author is, reminded of the parallelism between genius and insanity by the prophets and half-insane persons born on the hills of Judea and of Scotland. And here we may observe that Pro- fessor Lombroso treats all great intellectual and spiritual utter- ances as indications of insanity, and in his pages the men who have moved the world most profoundly are classed with lunatics. Savonarola, Pascal, Francis of Assisi, Loyola, Luther, are described as men of genius and insane ; the Apostle St. Paul, who had a "haughty and arrogant spirit," was the victim of epilepsy, and "became ferocious when inspired by passion." A writer who does not scruple to include the name of St. Paul's Master in his chapter on "Neurosis and Insanity in Genius," is not likely to understand the chief of his Apostles. We have rarely seen a book on which so much labour and folly have been expended as on The Man of Genius. Many of the multitudinous facts collected are of doubtful authority; but if we admit their accuracy, the arguments based on them are ridiculous. Professor Lombroso is, we suppose, a man of learning, or perhaps, in his own sense, a man of genius. The volume belongs to " The Con- temporary Science Series," to which it will hardly add much lustre.