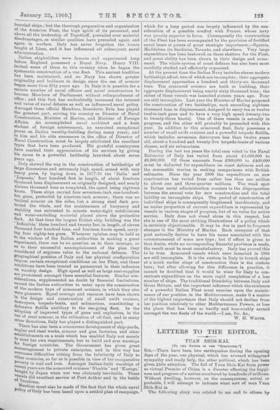 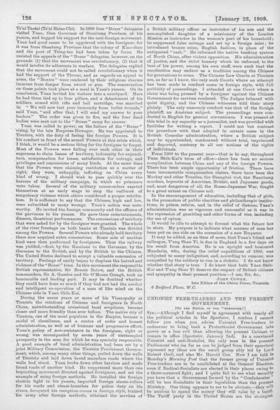 SIR,—There have been two earthquakes during the opening days of the year, one physical, which has aroused widespread sympathy and ready help, the other political, which has been given little attention. The fall of Yuan Shill-Kai from power as virtual Premier of China is a disaster affecting the happi- ness and progress of a nation numbered by hundreds of millions. Without dwelling, however, on the consequences, actual or probable, I will attempt to indicate what sort of man Yuan Sbib-Kai is.

The following story was related to me and to others by Ts'ai Taotai (Ts'ai Hsiao Chi). In 1900 four "Boxer" delegates visited Yuan, then Governor of Shantung Province, at his yamen, and begged his support for the anti-foreign movement. Yuan bad good cause to be aggrieved with the foreigner, for it was from Shantung Province that the colony of Kia.o-chau and the port of Tsing-tao had been taken by force. He resisted the appeals of the " Boxer " delegates, however, on the grounds (1) that the movement was revolutionary, (2) that it would involve its adherents in warfare. The delegates replied that the movement could not be called revolutionary when it had the support of the Throne, and as regards an appeal to arms, the "Boxers" were rendered by their religious charms immune from danger from sword or gun. The conversation on these points took place at a meal in Yuan's yamen. On its conclusion, Yuan invited his visitors into a courtyard. Here he had them tied up to four pillars, and a detachment of his soldiers, armed with rifle and ball cartridge, was marched in. " We will now test your immunity from bullet wounds," said Yuan, " and after that, I will send my answer to your leaders." The order was given to fire, and the four dead bodies were sent out to the "Boxer" camp for answer.

Yuan was called to power, on the failure of the "Boxer" rising, by the late Empress-Dowager. He was appointed to Tientsin, with the duty of facing the foreign Powers. It is his conduct in front of the armed Powers at this crisis which, I think, it would be a serious thing for the foreigner to forget. Most of the Powers were falling over each other in their eagerness to claim leases of territory, indemnity for expendi- tore, compensation for losses, satisfaction for outrage, and privileges and concessions of many kinds. At the same time that the Powers were claiming restitution as a matter of right, they were, unhappily, inflicting on China every kind of wrong. I should wish to pass quickly over the horrors of the military campaign, in which no prisoners were taken. Several of the military commanders exerted themselves at an early stage to stop the outburst of sanguinary violence which others considered a proper retribu- tion. It is sufficient to say that the Chinese, high and low, were submitted to many wrongs. Yuan's action was note- worthy. He invited the foreign community and the officers of the garrisons to hie yamen. He gave them entertainments, dinners, theatrical performances. The concessions of territory that were asked for by the foreigner were granted. The whole of the river frontage on both banks at Tientsin was divided among the Powers. Several Powers who already held territory there now acquired extra concessions. Some acts of another kind were then performed by foreigners. Thus the railway was yielded,—flret, by the Russians to the Germans, by the Germans to the British, and by the British to the Chinese. The United States declined to accept a valuable concession of territory. Feelings of amity began to displace the hatred and violence of the "Boxer" time. In this movement the responsible British representative, Sir Ernest Satow, and the British commanders, Sir A. Gaselee end Sir O'Moore Creagh, took an honourable and leading part. It may be doubted whether they could have done so much if they had not bad the cordial and intelligent co-operation of a man of like mind on the Chinese side in Yuan Shill-Kai.

During the seven years or more of his Viceroyalty at Tientsin the relations of Chinese and foreigners in North China, notwithstanding occasional local eruptions, became closer and more friendly than ever before. The native city of Tientsin, one of the most populous in the Empire, became a model of cleanliness, and a centre of order and honest administration, as well as of humane and progressive effort. Yuan's policy of non-resistance to the foreigner, right or wrong, was accompanied by seven years of unexampled prosperity in the area for which he was specially responsible. A good example of local administration had been set by a joint Military Commission, the Tientsin Provisional Govern- • ment, which, among many other things, pulled down the walls of Tientsin and laid down broad macadam roads where the walls had stood. Yuan broke down other barriers and made broad roads of another kind. He suppressed more than one boycotting movement directed against foreigners, and set the example of using foreign methods. He installed the foreign electric light in his yamen, imported foreign steam-rollers for his roads and steam-launches for police duty on his rivers, decorated his reception-rooms in foreign style, trained his army after foreign methods, obtained the services of a British military officer as instructor of his son and the accomplished daughter of a missionary of the Loudon Mission as instructor in the women's part of his household; lie suppressed false coinage and set up a foreign mint ; he introduced bronze coins, English fashion, in place of the antiquated " cash." He reformed the 'native banking system of North China, after violent opposition. His administration of justice, and time strict honesty which he enforced, to the best of his power, among his own staff, were such that the recollection may endure as a tradition among the Chinese for generations to come. The Chinese Law Courts at Tientsin are, as far as I know, the only such Courts where an attempt has been made to conduct cases in foreign style, with full publicity of proceedings. I attended at one Court where a claim was being pressed by a foreigner against the Chinese Government for services rendered. The Judges behaved with quiet dignity, and the Chinese witnesses told their story plainly. The only unseemly conduct was that of the foreign plaintiff, an Austrian subject. The proceedings were con- ducted in English for general convenience. I was present at this trial in my capacity as a journalist, and was provided with facilities for writing a report. I could not but contrast the procedure with that adopted in certain cases in the British Consular administration, where a British subject may be apprehended, condemned without trial, imprisoned and deported, contrary to all our notions of the rights of individuals.

From 1900 to the present year—that is to say, throughout Yuan Shill-Kill's term of office—there has been no serious complication between China and any of the foreign Powers. There has been ample opportunity of friction. There have been innumerable compensation claims, there have been the Mackay and other Treaties, the Shanghai riot, the Nanchang murders, boycotts of American, British, and Japanese goods, and, most dangerous of all, the Russo-Japanese War, fought to a great extent on Chinese soil.

In the encouragement of education, including that of girls, in the promotion of public charities and philanthropic institu- tions, in prison reform, and in the relief of distress, Yuan's administration was as vigorous and successful as it was in the repression of gambling and other forms of vice, including the use of opium.

It would be idle to attempt to format what the future has in store. My purpose is to indicate what manner of man has been put on one side on the accession of a new Emperor.

It may be added, as an item of news, that Yuan's friend and colleague, 'Pang Shao Yi, is due in England in a few days on his recall from America. He is an upright and honoured Mandarin, who, during the relief expeditions of 1900, was subjected to many indignities, and, according to rumour, was compelled by the soldiery to run in a ricksha. I do not know whether that story is true. I do know that both Yuan Shih- Kai and T'ang Shao Yi deserve the respect of British citizens and sympathy in their present position.—I am, Sir, &c., JOHN Cowes, late Editor of the China 'rinses, Tientsin. 6 Bedford Place, W.C.