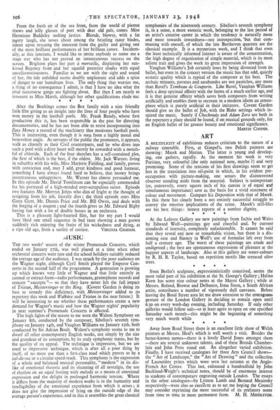 Page 14, 23 January 1948 — THE two weeks' season of the winter Promenade Concerts, which
Close

THE two weeks' season of the winter Promenade Concerts, which

ended on January 17th, was well placed at a time when other orchestral concerts were rare and the school holidays suitably reduced the average age of the audience. I was struck by the poor audience on the Wagner night, although Cyril Smith played the Emperor Con- certo in the second half of the programme. A generation is growing up which knows very little of Wagner and that little entirely in canned or extract form—radio performances, gramophone records and concert " excerpts "— so that they have never felt the full impact of Tristan, Meistersinger or the Ring. (Covent Garden is doing its best to remedy this deficiency, with Meistersinger added to its repertory this week and Walkiire and Tristan in the near future.) It will be interesting to see whether these performances create a new demand for Wagner's music and how the Wagner nights' popularity in next summer's Promenade Concerts is affected.

The high lights of the season to me were the Walton Symphony on January 8th, conducted by the composer, Sibelius's seventh sym- phony on January 14th, and Vaughan Williams on January 15th, both conducted by Sir Adrian Boult. Wakon's symphony seems to me to dwarf all other contemporary English works, not simply by the size and grandeur of its conception, by its truly symphonic status, but by the quality of its appeal. The technique is impressive, but we are used to impressive technique, which is after all a poor thing by itself, of no more use than a first-class road which proves to be a cul-de-sac or a circular speed-track. This symphony is the expression of a whole and balanced musical personality, " modern " in its dis- like of emotional rhetoric and its shunning of all nostalgia, the use of rhythm on an equal footing with melody as a means of emotional expression and the delight in prolonged 'harmonic tension. Where it differs from the majority of modern works is in the humanity and intelligibility of the emotional experience from which it arises; it does not give the impression of lying on the outside edge of the. average person's experience, and in this it resembles the great classical

symphonies of the nineteenth century. Sibelius's seventh symphony is, in a sense, a more esoteric work, belonging to the last period of an artist's creative career in which the tendency is naturally more and more towards inwardness—not introspection, 'but that com- muning with oneself, of which the late Beethoven quartets are the classical example. It is a mysterious work, and I think that even the least technically informed listener is aware of the concentration, the high degree of organisation of simple material, which is its most salient trait and gives the work its great impression of strength.

Vaughan Williams's lob certainly loses by being divorced from its ballet, but even in the concert version the music has that odd, quietly ecstatic quality which is-typical of the composer at his best. The archaic minuets, pavanes and>sarabandes are not pastiches, any more than Ravel's Tombeau de Couperin. Like Ravel, Vaughan Williams feels •a deep spiritual affinity with the forms of a much earlier age, and it is that genuine affinity which saves both composers from writing artificially and enables them to recreate in a modern idiom an atmos- phere which is purely artificial in their imitators. Covent Garden should give us the ballet of Job, with the Blake settings which in- spired the music. Surely if Checkmate and Adam Zero are both in the repertory a place should be found, if on musical grounds only, for an English ballet of far greater beauty and emotional -significance.