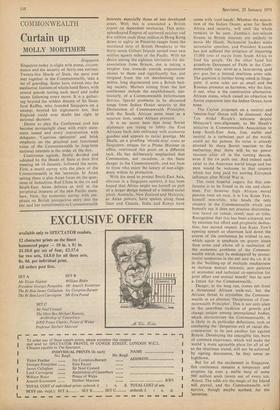 .Singapore Singapore today is alight with pomp, circum- stance and the security of thirty-one nations. Twenty-five Heads of State, the most ever met together in the Commonwealth, take a lot of guarding. Some have retired into the mediaeval fastness of whole hotel floors, with armed guards tasting each meal and radio teams following every move. It is a gather- ing beyond the wildest dreams of Sir Stam- ford Raffles, who founded Singapore on a swamp; beyond his nightmares too, that England could ever doubt her right to national decision.

Desire to play the Conference cool has become increasingly clear with every state- ment issued and every conversation with delegates. 'Cautious optimism' and brisk emphasis on the practical and functional value of the Commonwealth to long-term national interests is the order of the day.

Conference agenda, finally decided and adopted by the Heads of State at their first meeting on 14 January, followed the norm. First, a world survey with the place of the Commonwealth in the 'seventies. In Asian setting there is also Asian focus on the ques- tions of Indochina, Red China in the UN and South-East Asian defence as well as the peripheral interests of the new Pacific mem- bers. Next, the economic survey with em- phasis on British prospective entry into the E.Ec and her commitments to Commonwealth interests, especially those of less developed areas. With this is associated a British report on dependent territories. This mini- splendoured Empire of scattered patches and five million souls (four million in Hong Kong down to eighty in Pitcairn) ranges from the mainland strip of British Honduras to the thirty-seven Gilbert Islands spread over two million square miles of the Pacific. With no desire among the eighteen territories for dis- association from Britain, she is taking a tougher line towards outside expansionist claims to them and significantly has just resigned from the UN decolonising com- mittee, long degenerated into a British bait- ing society. Matters arising from the last conference include the establishment, par- ticularly, of a Commonwealth Information Service. Special problems to be discussed range from Indian Ocean security to the Declaration of Commonwealth Principles, with the South African arms issue as a separate item, under African pressure.

It is no secret here that local Soviet diplomats are trying to lobby the East Africans back into militancy with economic goodies and appeals to racial prestige. Mr Heath, on a gruelling 'whistle-stop' route to Singapore, unique for a Prime Minister in office, reinforced this point on a different tack. He has deliberately emphasised that Communism, not racialism, is the basic danger to the Commonwealth, and not least to those who enjoy the luxury of non-align- ment within its protection.

With the need to protect South-East Asia, obvious in a Singapore context, it has been hoped that Africa might see herself as part of a larger design instead of a limited racial pivot. Australia, New Zealand and Malaysia, as Asian powers, have spoken along these lines and Canada, India and Kenya have come with 'cool heads'. Whether the separa- tion of the Indian Ocean, arms for South Africa and security, will cool the whole remains to be seen. Zambia's last-minute threats to British interests are unlikely to move Mr Heath. Nationalist leaders make nationalist speeches, and President Kaunda has just suffered the irritation of importing 13,000 tons of maize from South Africa to feed his people. On the other hand her grandiose Document of Faith in the Com- monwealth may serve as a face-saving quid pro quo for a limited maritime arms sale. The question is further being asked in Singa- pore: if arms sales are so small and the Russian presence so harmless, why the fuss; if not, what is the constructive alternative. African states, which raised no objection to Soviet expansion into the Indian Ocean, have none.

The Ceylon proposals on a neutral and 'tension-free' Ocean will be discussed. And Tun Abdul Razak's welcome despite Malaysia's non-alignment, to Mr Heath's initiative in Commonwealth Association to keep South-East Asia, free, stable and neutral in a turbulent part of the world, could set the pattern. Its value is already attested by sharp Soviet reaction to the realisation that there will be no power vacuum after all in 'the coming decade, even if the us pulls out. And indeed such relief to the American world image and her men would be welcome to that country which has long paid for ousting European influence after World War it.

The most hopeful augury for this con- ference is to be found in its site and chair- man. For however high African moral passion runs on race, it is Lee Kuan Yew, himself non-white, who heads the only country in the Commonwealth which can honestly say it does not practise discrimina- tion based on colour, creed, race or tribe. Recognition that this has been achieved, not by emotion but effort and pragmatic dedica- tion, has earned respect. Lee Kuan Yew's opening speech as chairman laid down the course of the conference he wished to see, which again is emphasis on graver issues than arms and above all a realisation of the economic problems of the Common- wealth which may be endangered by protec- tionist tendencies in the EEC and the us. It is in the 'building-up of multiple mechanisms to increase mutual interests; new patterns of economic and technical co-operation for joint effort and mutual benefit' that he sees a future for the Commonwealth.

Danger, in the long run, comes not from a threatened African walk-out, but the African threat to crystallise the Common- wealth in an abstract 'Declaration of Com- monwealth Principles'. This is not only alien to the unwritten tradition of growth and change unique among international bodies, which characterises the Commonwealth; it is likely in its particular definitions, such as combating the 'dangerous evil of racial dis- crimination' to be just another bat against Britain. Developing the intangible ties, born of common experience, which will make the world 'a more agreeable place for all of us' as.the chairman stated, will not be achieved by signing documents, be they never so highflown.

But for all the excitement in Singapore, this conference remains a temporary and eruptive tip over a stable berg of some 900 million souls (seven out of every ten, Asian). The odds are the magic of the Island will prevail, and the Commonwealth will survive, though maybe scathed, for the 'seventies.