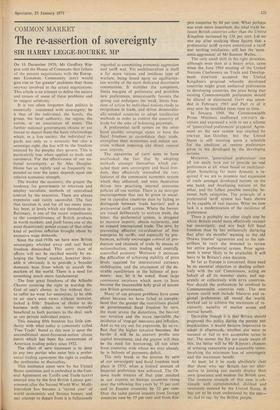 The re-assertion of sovereignty

On 16 December 1970, Mr Geoffrey Rip- pon told the House of Commons that failure of the present negotiations with the Europ- ean Economic Community (EEc) would give rise to 'far greater' problems than those anyway involved in the actual negotiations. This article is an attempt to define the nature and causes of some of these problems and to suggest solutions.

It is too often forgotten that politics is essentially concerned with sovereignty, be it that of the individual, the family, the group, the local authority, the region, the nation, or an association of states. The further national governments choose or are forced to depart from the basic relationships which, in a free society, the individual re- gards not only as a necessity but also a sovereign right, the less will be the freedom enjoyed by the peoples they govern. This is particularly true when applied to trade and commerce. For the effectiveness of our na- tional sovereignty, as Sir Alec Douglas- Home has so rightly and so frequently re- minded us over the years, depends upon our relative economic strength.

The weaker the economy, the greater the tendency for government to intervene and employ socialistic methods of centralised control by the executive. These are always expensive and rarely successful. The fact that taxation is, and for all too many years has been, at levels which are themselves in- flationary, is one of the major impediments to the competitiveness of British products in world markets, and jtself forms one of the most disastrously potent causes of that other kind of perilous inflation brought about by excessive wage demands.

Since the mid-1920s we have seen British sovereignty whittled away and real fiscal freedom diminished. This sorry state of affairs will not be rectified merely by en- larging the 'home' market, however desir- able it obviously is to provide a broader domestic base from which to assault the markets of the world. There is a need for something much more fundamental.

The four great freedoms of the Atlantic Charter covering the right to worship the God of one's choice, to live without fear, to suffer no want for necessities, to be able to air one's own views without restraint, lacked a fifth: freedom of choice to do business with others on terms mutually beneficial to both partners to the deal, such as any private individual enjoys.

This missing fifth freedom has little sim- ilarity with what today is commonly called 'Free Trade', based as this now is upon the unconditional .most-favoured-nation clause (MFN) which has been the cornerstone of American trading policy since 1922.

The effect of MFN treatment is to deny to any two parties who enter Into a prefer- ential trading agreement the right to confine the preference to themselves.

This insistence upon MFN by the United States continues, and is embodied in the Gen- eral Agreement on Tariffs and Trade (GAT]) entered into by the first British Labour gov- ernment after the Second World War. Multi- lateralism has become a 'sacred cow' of world economists and finance houses. and any attempt to depart from it is fallaciously regarded as committing economic aggression and tariff war. Yet multilateralism is itself a far more vicious and insidious type of warfare, being based upon an egalitarian- ism worthy of the most dedicated doctrinaire communism. It stultifies the competent, limits margins of preference and prohibits new preferences, unnecessarily favours the strong and endangers the weak, limits free- dom of action by individual nations ready to reciprocate in trade, and drives democratic- ally-minded countries to adopt totalitarian methods in order to control the quantity of trade for the sake of balancing payments.

A preferential tariff system on the other hand enables sovereign states to have the fiscal freedom to co-ordinate their trade, strengthen their economies and reduce tax- ation without imposing any direct control over imports.

The signatories of GATT seem to haVe overlooked the fact that by adopting methods amongst themselves which cur- tailed their own sovereignty and fiscal free- dom, they effectively intensified the very features of the communist economic system which they abhorred, and were themselves driven into practising internal economic policies all too similar. There is no stronger encouragement that can be given to social- ism in capitalist countries than by failing to distinguish between 'trade barriers' and a preferential tariff system. Where the former are raised deliberately to restrain trade, the latter, the preferential system, is designed to increase imports, obtain reciprocity, and so expand international trade. The MFN, by preventing effective co-ordination of free enterprise by tariffs, and especially by pre- ferences, actively encourages control of pro- duction and channels of trade by means of nationalisation, state trading and centrally controlled economy. Moreover it increases the difficulties of achieving stability of price levels required for international currency stabilisation, and the attainment of the de- sirable equilibrium in the balance of pay- ments: not, let it be noted, those large continuing surpluses which seem to have become the inaccessible holy grail of succes- sive British governments.

Many of our present problems have come about because we have failed to compre- hend that the greater the restrictions placed on governmental fiscal freedom by MFN, the more severe the distortions, the heavier our taxation and the more inevitable the incidence of `stop-go' measures and inflation. And as we cry out for expansion, let us re- flect that the higher taxation becomes, the harder it will be to convert profits into capital investment, and the greater will then be the need for borrowing, all too often from countries with whom we may already be in balance of payments deficit.

The only break in the erosion by MFN of our sovereignty and fiscal freedom took place in 1932, when a limited amount of Imperial preference was achieved. The Ot- tawa trade treaties of that year resulted in our exports to foreign countries rising over the following five years by 35 per cent and to Empire countries by 52 per cent. Over the same period imports from foreign countries rose by 37 per cent and from Em- pire countries by 64 per cent. What perhaps was even more important, the total trade be- tween British countries other than the United Kingdom increased by 124 per cent. Let no one say after studying these figures that a preferential tariff system constituted a tariff war inviting retaliation, still less the 'econ- omic..aggression' of Mr Sumner Welles.

The only small shift in the right direction, although even then at a heavy price, came when the June 1964 meeting of the United Nations Conference on Trade and Develop- ment (uNcTAD) accepted the United Kingdom's proposal whereby developed' countries might grant unilateral preferences to developing countries, the price being that existing Commonwealth preferences should be diluted or eliminated. GATT was amen- ded in February 1965 and Part iv of it may now be modified from time to time.

In January 1969, the Commonwealth Prime Ministers reaffirmed UNCTAD'S de- cisions and expressed a wish to see a scheme of 'generalised preferences' prepared. Agree- ment on the new system was reached by UNCTAD last October, but the United States is still insisting upon a schedule for the abolition of reverse preferences given to the developed by the developing nations.

Moreover, 'generalised preferences' can all too easily turn out to provide no real preferences at all, when based on multilater- alism. Something far more dynamic is re- quired if we are to promote real expansion of trade amongst developed nations on the one hand, and developing nations on the other, and the fullest possible interplay be- tween both categories. The principle of a preferential tariff system has been shown to be capable of real success. What we now lack is a modernisation of the incidence of preferences.

There is probably no other single step by which Britain could more effectively reassert her sovereignty, and win back full fiscal freedom than by her unilaterally declaring that after six months' warning to the old Ottawa treaties' signatories and to the sub- scribers to GATT she intended to review her entire preferential system. Prior agree- ment is never likely to be attainable. It will have to be Britain's own decision.

So far as Europe is concerned, there need be no essential objection to dealing collect- ively with the EEC Commission, acting on behalf of all its member states, and sep- arately or collectively with EFTA countries. Nor should the preferences be confined to Commonwealth countries only. The new system could well include bilateral and re- gional preferences all round the world, worked out to achieve the maximum of re- ciprocity, equality of market access and mutual benefit.

Desirable though it is that Britain should propound this policy during the present EEC negotiations, it would become imperative to adopt it afterwards, whether she were to succeed or fail to win acceptable terms 'in EEC. The sooner the Six are made aware of this, the better will be Mr Rippon's chances of winning reasonable and acceptable terms. involving the minimum loss of sovereignty and the maximum benefit.

At least, let it be made absolutely clear that those who say Britain has no alter- native to joining EEC merely display their own ignorance and weaken the British case. The immense strength of this case is ob- viously well comprehended, disliked and resolutely resisted by the United States. It has yet to be even understood by the EEC- or, sad to say, by the British people.