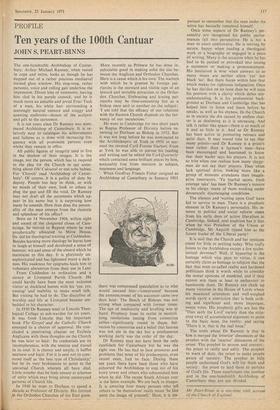 Ten years of the 100th Cantuar

The one-hundredth Archbishop of Canter- bury, Arthur Michael Ramsey, when vested in cope and mitre, looks as though he has stepped out of a rather precious mediaeval stained glass window. His sing-song, rather parsonic, voice and rolling gait underline the impression. Divest him of vestments, leaving him clad in his purple cassock, and he is much more an amiable and jovial Friar Tuck of a man, his white hair surrounding a seemingly natural tonsure and craggy and questing eyebrows—dream of the sculptor and gift to the cartoonist.

It is ten years since Dr Ramsey was nom- inated Archbishop of Canterbury. It is re- latively easy to catalogue his achievements and failures as is done with increasing fre- quency with all prominent persons even whilst they remain in office.

All public figures of integrity tend to live in the shadow of their images. It is the image, not the person, which has to respond to the plea for the Church to say some- thing about Oh! Calcutta! or test-tube babies. For 'Church' read 'Archbishop of Canter- bury'. Of course, it is a policy of duty by deputy. People too lazy to think, or with no minds of their own, look to others to plug the gap and fill the void. Dr Ramsey may not draft all the statements which ap- pear in his name but it is surprising how many he amends. How then does the person- ality of the man emerge from the rhetoric and splendour of his office?

Born on 14 November 1904, within sight and sound of the cloistered closes of Cam- bridge, he moved to Repton where he was prophetically allocated to Mitre House. He did his theological training at Cuddesdon. Besides learning more theology he learnt how to laugh at himself and developed a sense of humour, wit,and sense of the absurd which he maintains to this day. It is gloriously un- sophisticated and has lightened many a dark- ness. His weakness for epigrams leads him to voluntary abstention from their use in Lent.

From Cuddesdon to ordination and a curacy at Liverpool Parish Church. He could hardly have been the most welcome visitor at dockland homes with his 'yes, yes, yessing' and inability to make small talk. But visiting he had to do. The discipline of worship and life at Liverpool became em- bedded in his character.

In 1930 Dr Ramsey wenf to Lincoln Theo- logical College as sub-warden for six years. It was from Lincoln that his important book The. Gospel and the Catholic Church emerged to a chorus of approval. He con- cluded a penetrating chapter on Ecclesia Anglicana with these thoughts on the Church he was later to lead:. Its credentials are its incompleteness, with the tension and travail in its soul. It is clumsy and untidy, it baffles neatness and logic.,For it is sent not to com- mend itself as 'the best type of Christianity,' but by its very brokenness to point to the universal Church wherein all have died. Little wonder that he feels uneasy at schemes of unity which may bring about stereotyped patterns of Church life.

In 1940 he went to Durham to spend a decade as Professor of Divinity. His interest in the Orthodox Churches of the East grew. More recently as Primate he has done in- calculable good in making solid the ties be- tween the Anglican and Orthodox Churches. Here is a cause which is his own. The warmth with which he is greeted by foreign pat- riarchs is the outward and visible sign of an inward and invisible attraction to the Ortho- dox Churches. Embracing and kissing pat- riarchs may be time-consuming but as a bishop once said to another on the subject: 'I am told that the efficacy of our relations with the Eastern Church depends on the fer- vency of our osculations.'

He went to Cambridge for two short years as Regius Professor of Divinity before re- turning to Durham as Bishop in 1952. But it was not long before he was nominated to the Archbishopric of York in 1956 to suc- ceed the revered Cyril Forster Garbett. Even at York he was able to pursue his reading and writing and he edited the York Quarterly which contained some brilliant pieces by him, noticeably free from restraint in subject, treatment and language.

When Geoffrey Francis Fisher resigned as Archbishop of Canterbury in January 1961 there was compressed speculation as to who would, succeed him—`compressed' because the announcement of his successor came two days later. The Bench of Bishops was not strong when compared with former times. The age of mediocrity and levelling was at hand. Prophecy loses its outlet in neutral- ising resolutions issuing from committee tables—significantly round in shape. Sal- vation by committee and a belief that heaven was not pie in the sky but a posthumous working party was the order of the day.

Dr Ramsey may not have been the only candidate for Canterbury but he was the right one. He has had to face pressures and problems that none of his predecessors, even recent ones, had to face. During these ten years there have been those who have exhorted the Archbishop to step out of his ivory tower and others who admonished him when he did. The recent South African tour is the latest example. We are back to images. It is amazing how many persons who tell others to 'be themselves' really mean 'be like unto the image of yourself.' Here, it is im- .. portant to remember that the man under the mitre has basically remained himself.

Once some aspects of Dr Ramsey's per- sonality are recognised his public perfor- mances fall into perspective. He is not a man to court controversy. He is retiring by nature, happy when reading a theological work or a biography or engaged in a piece of writing. Many is the occasion when he has had to be pushed or provoked into issuing a statement or making a pronouncement. His hesitation is wise when answers to so many issues are neither white 'yes' nor black 'no'. But there burns within him that which makes for righteous indignation. Once he has decided on an issue then he will state his position with a clarity which defies mis- understanding. It is his professorial back- ground at Durham and Cambridge that has helped him to listen and learn before he speaks, as well as his shyness. In the Church as in society the din caused by endless chat- ter is as deafening as it is unceasing. And talk is rather like space—there is so much of it and so little in it. And so Dr Ramsey has been active in promoting retreats and quiet days. It may sound trite to say that many priests—and Dr Ramsey is a priest's man rather than a layman's man—have been encouraged and heartened to know that their leader says his prayers. It is not so trite when one realises how many clergy- men do not say their prayers. They often lack spiritual drive, looking more like a group of museum attendants than imagin- ative innovators. 'Ye fearful saints, fresh courage take' has been Dr Ramsey's missive to his clergy, many of them working under desperately discouraging conditions.

The silences and 'waiting upon God' have led to service to man. There is a prophetic element in Dr Ramsey's personality. His in- terest in politics and social reform stems from his early days of active liberalism at Cambridge. Indeed, oral tradition has it that when he was President of the Union at Cambridge, Mr Asquith tipped him as the future leader of the Liberal party!

It is said that the Church and her opinions count for little or nothing today. Who really listens to the Archbishop except a few eccles- iastical devotees? Well, if hypocrisy is the homage which vice pays to virtue, it can certainly claim as homage to religion that the fact that even so-called realist and hardened politicians think it worth while to consider the moral opinions of mankind, and if they cannot win them at least to endeavour to bamboozle them. Dr Ramsey can chalk up many victories in the House of. Lords where his measured utterances and well-weighed words carry a conviction that is both strik- ing and significant and, more important, sways votes. His prophetic gifts are less the 'Thus saith the Lord° variety than the strip- ping away of accumulated argument to point to the basic issue, the reality, and saying `There it is, that is the real issue.'

Mr Peart-Binns is a one-time civil servant of the Church of England.